El viejo no se kiere mourir, para mas ver i mas sintir.
“The elderly do not want to die, for there is more to see and more to hear.”

This refran, or Ladino saying, encapsulates the most basic human need for connection. One of the most difficult realities we confront is that when we die, we will leave those who we “see” and “hear”—our friends, families, and communities—behind.

Throughout the Ottoman Empire, communities ensured not only that preparations for death would be made with community but also undertaken in a joyful manner. With the aging individual at the center of attention, family and friends would gather in a home to celebrate the kortar mortaja.

Although preparing burial shrouds in advance of one’s death was a widespread Jewish custom, Sephardic Jews approached the preparations with a unique sense of joy and community. At the kortar mortaja celebration, a person would be fitted for their burial shrouds. Known in Hebrew as takhrikhim—which is derived from the word “to wrap”—the shrouds consist of a tunic, hood, pants, and belt.

The practice of preparing the shrouds before death is alluded to in the Me-am Lo’ez, a Ladino commentary on the Bible and encyclopedia of Sephardic customs:

"And many people point out that in Judaism they have the shroud prepared promptly while they are alive, and this is very good for many reasons, and one is that one may die on a festival, and then they will be forced to have [the shrouds] made by the hands of non-Jews, and the clothes of the next world should not be made by fervent hands."

The primary reason for preparing the shrouds in advance, according to the Me-am Lo’ez, is so that the garment is prepared by Jews—in other words, by one’s own community.

Just like the kortar fashadura celebration that prepared for a new baby, the kortar mortaja was also a joyous occasion. Instead of life and death existing in stark opposition, the kortar mortaja rendered the emotional boundaries between beginning and end more fluid with its joyous tone. 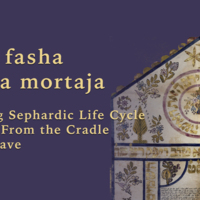