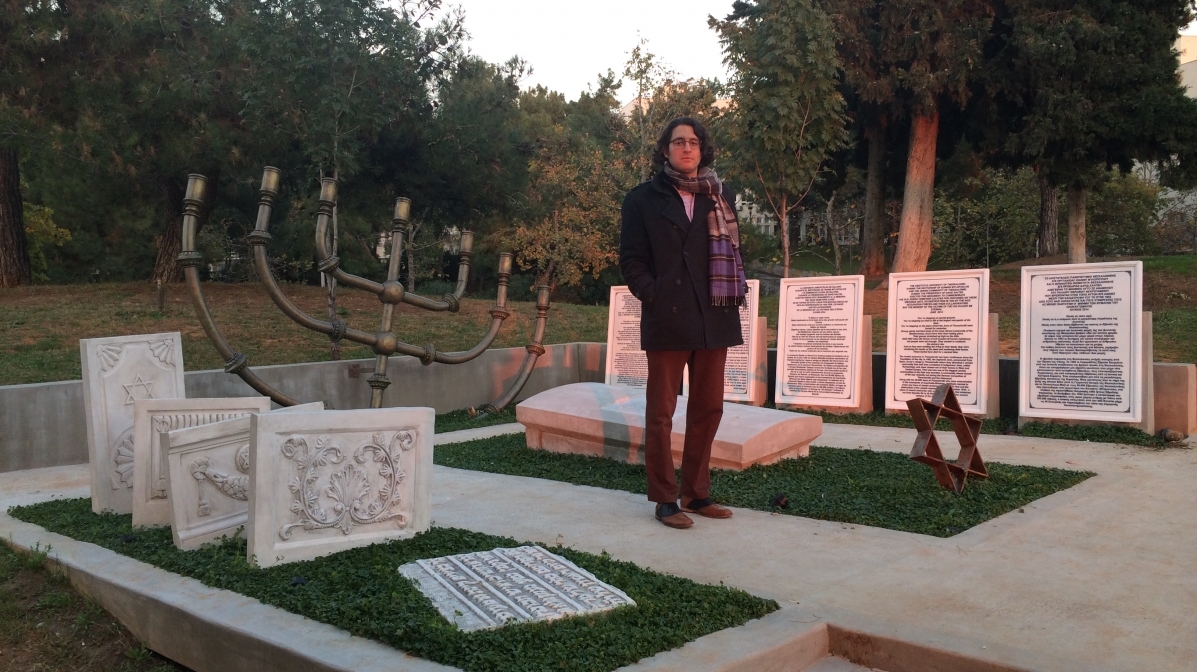 Devin Naar visits the new monument at the University of Thessaloniki commemorating the Jewish cemetery that used to exist there. Photo credit: Iosif Vaena.

This past fall in Salonica, I spoke on sacred ground about the past and future of Greek Jewish history.

Once home to the largest Ladino-speaking Jewish community in the world, Salonica (Thessaloniki), the second biggest city in Greece today, lost nearly all of its Jews as a result of the Holocaust, during which the Nazis deported close to fifty thousand people to their deaths at Auschwitz. Almost all the remnants of the centuries-long Jewish presence in this once cosmopolitan city—from the more than three dozen synagogues to the vast Jewish cemetery—were obliterated, partly at the initiative of local Greek Orthodox residents and leaders themselves.

Now, more than seventy years later, Salonica is undergoing a process of reassessing its past, rediscovering its Jewish heritage, and seeking to come to terms with one of its darkest chapters, as it, along with the rest of Greece, forges a path forward amidst the continued economic crisis and accompanying political turmoil.

Thanks to support from the American consulate, I travelled to Salonica in the autumn of 2014 to participate in an international conference about the Holocaust in Greece—the first one sponsored in part by the municipality itself—and to deliver a lecture at the city’s Aristotle University, one of the largest universities in the country whose campus sits exactly on the spot where the vast Jewish cemetery once stood. The Holocaust conference, which drew local researchers as well as some of the top scholars in the fields of Holocaust and genocide studies from across the world, constituted a turning point and a sign of the changing times. H-Net published a review of the papers. The gathering also symbolized a broader openness on the part of the city leadership and university administration to break the long-standing silence regarding the city’s Jewish past as well as its erasure from the urban fabric and official public memory. I’d like to think that my lecture at Aristotle University also contributed to this trend.

Salonica, however, sits at the crossroads of competing political and cultural trends, with the rise of the far right, outwardly xenophobic, antisemitic, anti-Muslim party, Golden Dawn. I described my observations about some of these trends in 2013 in a cover story for the Jewish Review of Books following my visit to Thessaloniki for a 2012 conference. In that essay, I lamented that approximately seventy years after the Second World War, the Aristotle University of Thessaloniki still had not yet officially recognized the fact that its campus sat on top of the once expansive and historic Jewish burial ground; not even a small monument had been erected. My visit this past autumn coincided with the erection of the first-ever monument on the campus of the university that indicates the site’s previous use as a burial ground, but the wording and the actors to whom responsibility for the destruction is attributed has sparked another controversy. 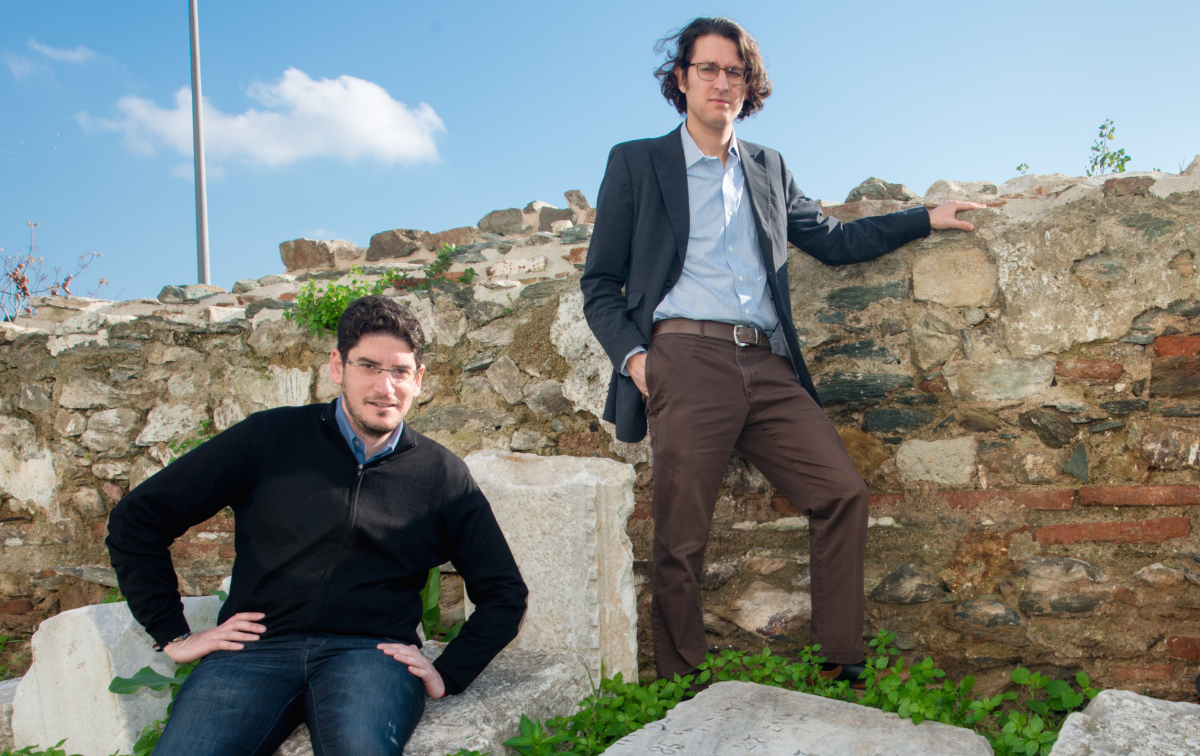 In addition to the creation of the monument to the Jewish cemetery (which has already been desecrated), the Aristotle University and the Jewish Community of Salonica are seeking to establish an unprecedented chair in Jewish history that would perhaps also provide opportunities for students and scholars to learn the historic local Jewish language, Ladino (Judeo-Spanish). This is a very exciting opportunity and I wish my colleagues in Thessaloniki great success, and it was with this goal in mind that I conceptualized the lecture that I gave at the University during my visit this past fall.

In the lecture, I described attempts by local Jewish and Orthodox Christian intellectuals to achieve greater rapprochement between the city’s populations during the 1920s and 1930s. One of the ways they sought to do this was through education, both among Jews and Orthodox Christians, at the elementary and high school level, as well as at the university level. I described the processes through which Aristotle University hired a professor of Jewish history and Hebrew literature and sought to incorporate Jewish studies into the curriculum for the first time. That position dissolved in the mid-1930s. Since then, there has been no scholar at the university specifically responsible for teaching Jewish history—a phenomenon that may very well change with the new plans for a chair of Jewish history.

Given the dynamics of the situation and my own family connection to the city, I decided to provide prefatory remarks about the symbolic significance and emotionally charged nature of my lecturing at the University of Thessaloniki’s campus, under which I knew my own ancestors, for four centuries or more, had been buried and of which no trace remained. I spoke, hesitantly, and almost overwhelmed with emotion, first in Greek, because I wanted to make my point very clear to all those assembled in the language of the country; and then in Ladino, because I wanted people to hear the sounds of a language that once used to be as much a part of the city as any other.

Ladino: the Jewish language that once could be heard in every corner of town and which has long since disappeared from Salonica’s soundscape. This language, from my perspective, was once just as much a Jewish language as a Salonican language, and this point must be understood and accepted. One newspaper commented that my remarks in Ladino constituted the first time that the language was spoken publically since the 1930s. I am not entirely sure if that is the case, but if it is, I am very proud of it.

Here is a recording of my remarks in Greek and Ladino:

The international conference, my visit and my lecture at the university attracted quite a bit of press attention (see, for example, a piece in the newspaper of Northern Greece, Voria). At this link please find the translated interview with me that appeared in December 2014 as a cover story in Epiloges, the literary supplement of Makedonia, one of the most important newspapers in the city (click here for the original Greek-language publication).

There is a symbolic significance to the fact that my words, photographs of me, and images of Jewish tombstones—some still scattered about the city and used as building material—have now appeared in Makedonia in a sympathetic light and as a result of genuine public interest and concern. This is especially notable because in 1931, amidst the Great Depression, the editor of Makedonia stirred up an unprecedented wave of popular antisemitism that culminated, that summer, in the only major pogrom perpetrated in the history of Thessaloniki. The magazine also ran an excellent article focused on the research of my friend and colleague, Leon Saltiel, a native of Thessaloniki, whose PhD dissertation focuses specifically on the destruction of the city’s Jewish cemetery.

With the victory of Syriza, the leftist party in Greece, the future dynamics of the place of Jews in Greek society – as well as the prickly question of Israel – remain contested. For an overview of the situation, see the insightful post by the blogger Abravanel, “Tsipiras Wins, what can Jews in Greece and abroad expect?”
A former rabbi from Greece now in Israel sounds the alarm in this article. In contrast, official Jewish leadership in Greece lauds the winning party, while Algemeiner reports that Jewish leaders are expressing ambivalence about the new Greek government.

Finally, for making my visit both possible and extremely rewarding, I would like to thank Robert Sanders, American Consul, and Ioanna Koutsounanou, the public affairs specialist at the American Consulate General in Thessaloniki; Dr. Giorgos Antoniou at the International Hellenic University, Dr. A. Dirk Moses, European University Institute-Florence, and the Journal of Genocide Research for organizing the conference; Dr. Antoniou, Dr. Vassilis Gounaris, Dr. Eleni Hondolidou, and Dr. Demetrios Mavroskoufis, dean of the School of Philosophy at the Aristotle University of Thessaloniki, for hosting my lecture at the university; and David Saltiel, president of the Jewish Community of Thessaloniki, for his encouragement and continued efforts to bring the city’s Jewish past—and present—out from beneath the shadows.

Want to see more articles like this?  Sign up for our newsletter!
⇒ Learn more about the Stroum Center for Jewish Studies at the University of Washington, our Sephardic Studies Program, or our Israel Studies Program.
Note: The opinions expressed by faculty and students in our publications reflect the views of the individual writer only and not those of the Stroum Center for Jewish Studies.
By Devin Naar|2017-09-04T22:41:59-07:00January 28th, 2015|Categories: Sephardic Studies|Tags: Devin Naar, History, Holocaust, Sephardic|13 Comments