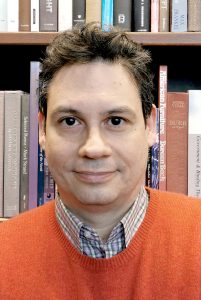 Dr. Nikos Tzafleris is a Fulbright Scholar and a Visiting Lecturer hosted by the Department of History and the Stroum Center for Jewish Studies, part of the Henry M. Jackson School of International Studies at the University of Washington. His Fulbright project, “The Relief Program of the American Jewish Joint Distribution Committee in Greece after WWII,” investigates how the American Jewish Joint Distribution Committee (AJDC) in the immediate postwar years established a relief network to help the Greek Jews.

His research interests are focused on the Holocaust, post-Holocaust reconstruction of Jewish communities, Jewish immigration to Palestine, and Axis occupation in Europe and the War Economy. His interests cover, chronologically, the 20th century and, geographically, the Eastern Mediterranean, Balkans and Greece. He has held postdoctoral fellowships at the United States Holocaust Memorial Museum (2009-2010), at the International Institute for Holocaust Research at Yad Vashem (2012), and at the Research Centre for the Humanities in Athens (2017).

Dr. Tzafleris has a long-term commitment of more than 13 years as a principal researcher and project director for the U.S. Holocaust Memorial Museum on several research projects in Greece. The most recent ones are “Immigration to Palestine: The Story of the SS Athena/Rafiah Ship and Shipwreck 1946,” done together with the Ephorate of Underwater Antiquities – Greek Ministry of Culture, as well as a project on historical archives of the Central Board of Jewish Communities in Greece, the umbrella organization of Greek Jews.

Between 2010-2017, he collaborated extensively on many projects in Israel and Greece with Yad Vashem. He has traveled many times to Israel for research collaboration, archival research, co-organizing events, teaching, participating in workshops and presenting at international conferences and giving lectures at Yad Vashem and the University of Haifa.

Nikos has taught courses on the Holocaust, racism and discrimination at the University of Thessaly since 2015, and on the history of the construction of the modern Greek state, and on European economic and social history, at the Hellenic Open University since 2017.