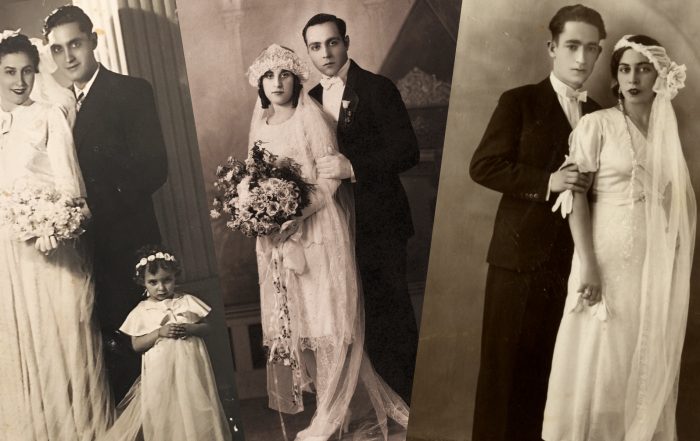 Welcome to the first digital exhibition on Sephardic life cycle customs! Using artifacts from the Sephardic Studies Digital Collection, we will guide you through the four main phases of the life cycle -- birth, coming of age, marriage, and death -- by tracing the traditions and customs practiced by Ladino-speaking Sephardic Jews from the Ottoman Empire to the Pacific Northwest.

Who are Sephardic Jews?

Sephardic Jews, or Sepharadim, are the heirs of a unique and multifacted heritage: Of Spanish-speaking background, but not quite Spaniards; from the Muslim world, but not Muslims; and Jewish, but unlike the vast majority of American Jews.

The word “Sephardic” derives from the Hebrew word sefarad, meaning Spain -- a reference to the Iberian Peninsula (modern day Spain and Portugal) that Sepharadim called home for centuries. In 1492, all Jews were expelled from Spain and sought refuge throughout the Mediterranean world -- especially in the Ottoman Empire. Under the aegis of the sultans, Sepharadim developed their own cultural universe. For over four hundred years, Sephardic Jews developed a vast literary, artistic, and cultural tradition.

With the collapse of the Ottoman Empire during World War I, Sephardic Jews fled the Mediterranean and many settled in the United States -- and Seattle quickly became home to the third largest Sephardic community in America.

Until now, the Sephardic experience in the Ottoman Empire and the United States has been largely invisible to scholars and the American public alike. This exhibition is one major contribution that is bringing these histories and experiences out of the shadows so that they can be documented and studied.

A handwritten Ladino song for the shemira, an evening of prayer before the circumcision of a Jewish baby boy, written in soletreo (Sephardic Hebrew cursive). Click to enlarge.

Most of the artifacts in the Sephardic Studies Digital Collection, and in this exhibition, are written in Ladino. Also known as Judeo-Spanish or Judezmo, Ladino originated among Sepharadim in the Iberian Peninsula and developed its distinctive features after the Spanish Expulsion, especially throughout the Ottoman Empire.

While based in Spanish and other Iberian languages with a strong Hebrew-Aramaic component, Ladino incorporated many elements from the languages of the Mediterranean world including Turkish, Greek, Italian, French, and Arabic. It was a language for all occasions: of the home, the street, the marketplace, and the synagogue; for humor and satire, politics and literature. Ladino also served as a cultural bridge that linked Sepharadim to their Muslim and Christian neighbors.

In this exhibition, you will see Ladino conveyed in a variety of ways: in religious texts, newspaper articles, oral histories, songs, and more. You will also see it printed in Hebrew square (meruba) and rashi letters -- the way it was produced until romanization became popular in the twentieth century -- as well as handwritten in soletreo, the traditional Sephardic Hebrew cursive script used to write Ladino. In either case, we have made efforts to romanize the Ladino resource so that it can be more accessible to a variety of audiences.

About the Sephardic Studies Digital Collection

The artifacts in this exhibition come from our very own Sephardic Studies Digital Collection (SSDC) at the University of Washington, the world’s first major digital repository of sources pertaining to the largely invisible yet historically significant Sephardic Jews of the Mediterranean world. In partnership with local Sephardic institutions, the Sephardic Studies Program has gathered over 2,000 items — including 403 Ladino books that have since been digitized — from over 100 families to build this digital library.

The SSDC serves as a bulwark against the loss of culture, language, and history, and includes key books, archival documents, and audio recordings that illuminate the history, culture, literature, politics, customs, music, and cuisine of Sephardic Jews all expressed in their own language, Ladino. The artifacts offer Mediterranean views of major political, cultural, social, and economic transformations from the seventeenth to the twentieth centuries articulated in Ladino by Jews living in a Muslim world. These texts challenge us to reconsider popular and scholarly assumptions about the relations between Jews and Islam as well as Europe, the Middle East, and the United States — past and present.

Have an artifact of your own that you'd like to contribute? Learn how to share your Sephardic artifacts with us here.