Why Do Jews Have Confirmation? 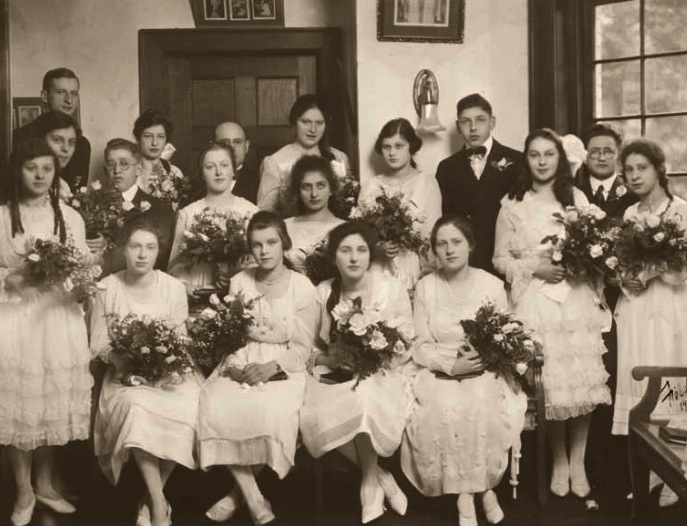 Archival records from Temple De Hirsch Sinai, Seattle’s largest Reform synagogue, include over 29 boxes of photos, documents, and other records that span from 1883 to 2001. One of the most fascinating parts of the collection is a series of pamphlets recording the Temple’s yearly confirmation ceremony, beginning in 1901. Studying these early programs sheds light on the process of religious reform and acculturation that characterized Reform Judaism in Seattle and around the United States.

Before delving into the content of the confirmation ceremony itself, it is important to note the unusual nature of this particular ritual — one with no precedent in traditional Jewish sources. The primary coming-of-age ritual for Jews is the Bar (or Bat) Mitzvah, a celebration of a young man’s (or young woman’s) acceptance of the positive commandments of Judaism at age 13. Bar Mitzvah, a term that literally means “son of the commandments,” reflects a tenet in Judaism requiring men to fulfill the 613 commandments that God asked the Jewish people to follow as part of the covenant between God and his chosen people.

Having already celebrated a Bar or Bat Mitzvah, why would Reform Jews celebrate confirmation, as well? The order of the services, as recorded in Temple De Hirsch Sinai’s confirmation programs, provides insights into the meaning of this ceremony. 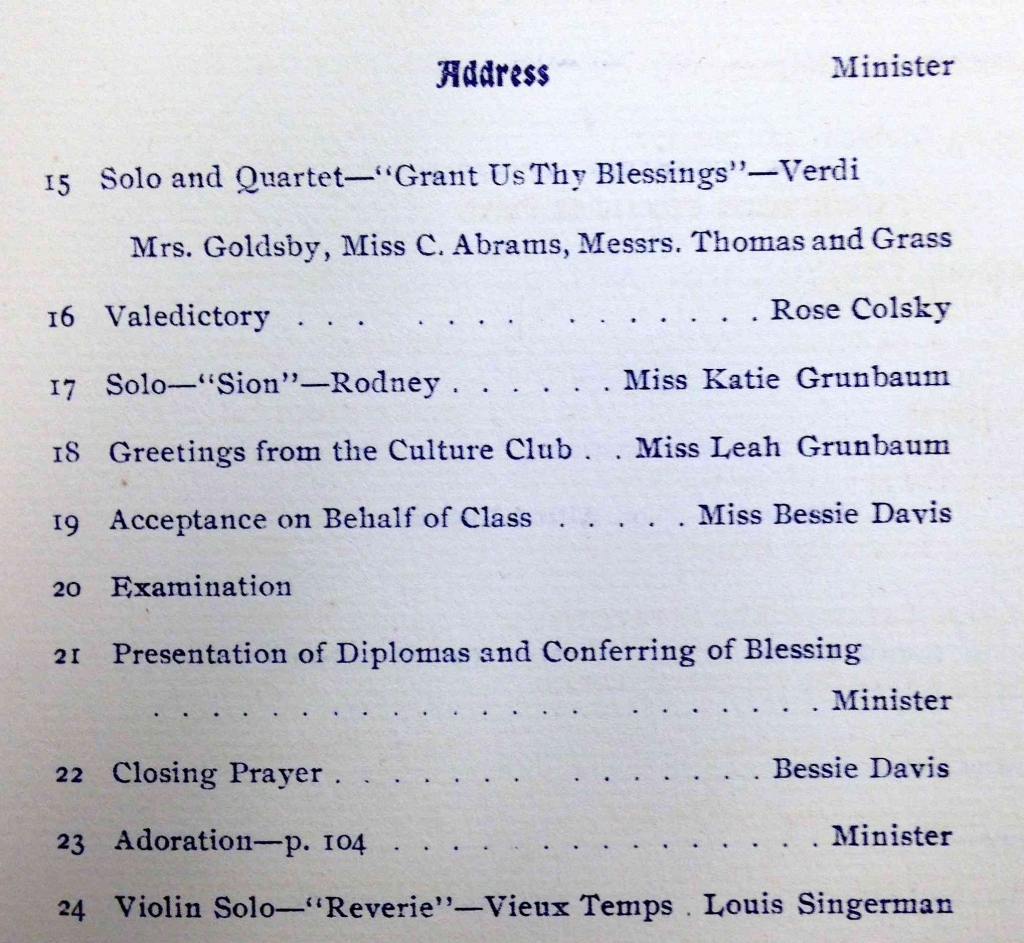 One notes the similarities to titles now more familiar to Christian religious communities. The prayer leader was not referred to as a “rabbi,” but as a minister. The service does include the traditional practice of reading from the Torah, or Hebrew Bible, although the reading chosen is quite significant: “the Decalogue,” otherwise known as the Ten Commandments.

The centrality of the Decalogue in the service is not random. The confirmation service was held in early June, which links it with Shavuot, the holiday associated with the giving of the Torah at Mt. Sinai. (While Shavuot likely set the broad theme for the confirmation service, the actual date selected was the first Sunday after the holiday, according to the Hebrew calendar.)

Confirmation reframed the Jewish holiday of Shavuot, from a binding obligation to follow certain ritual actions to a declaration of the divine principles that are encapsulated in the Ten Commandments. This focus on belief is so central to the confirmation ceremony that students participated in an examination of their knowledge as part of the ritual.

The aesthetics and order of the service owe a great deal to the desire to shape the new Jewish “congregation” along American lines. The service was shaped around performances of classical music, often compositions intended for Christian worship. The structure of the ritual closely resembled that of a graduation ceremony, with a processional, presentation of diplomas, valedictory address, and greetings from specific clubs. The model of membership within the Jewish community that confirmation represents was clearly shaped by the American ritual of graduation — a ritual celebrating the mastery of content knowledge presented through a specific curriculum. 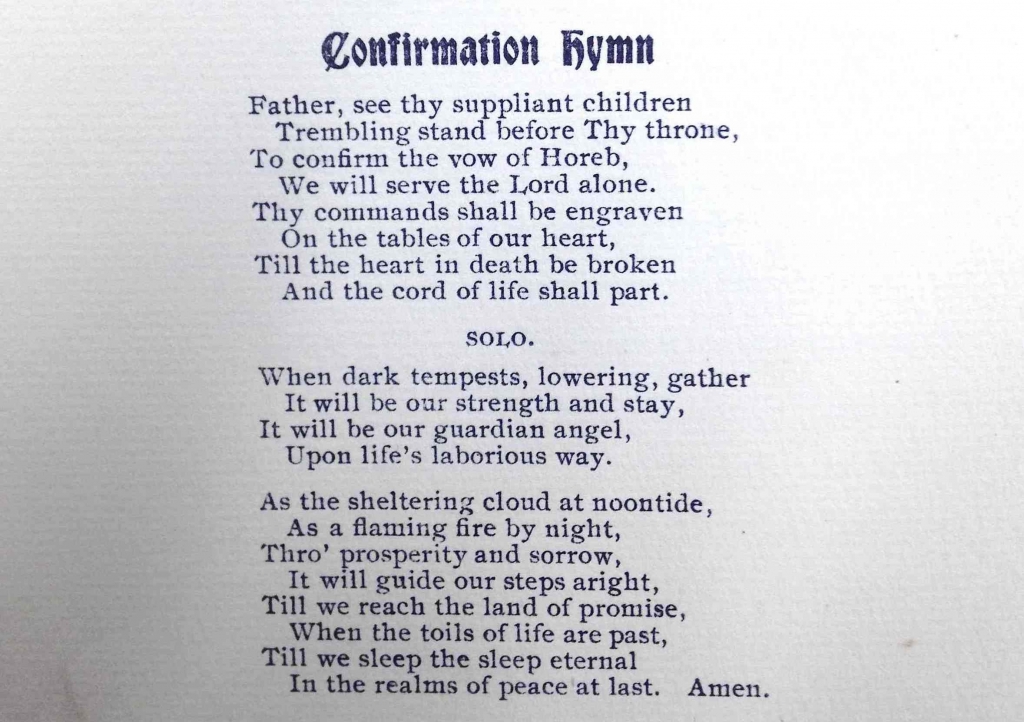 The rise of the confirmation demonstrates the influence of Protestant definitions of religion on Jewish thought. Confirmation reshaped Jewish theology to fit the expectations of creed-based religious traditions that equated religion with theological and ethical commitments. Indeed, confirmation during this time period existed as a key coming-of-age moment for Catholics and for several Protestant denominations, as well (including German Lutherans, the majority religion in the German land that sparked the first Reform communities in the early decades of the nineteenth century).

The confirmation program offered a set of religious practices that meshed perfectly with the expectations for Christian coming-of-age ceremonies that were popular in the United States at this time. A Bar Mitzvah welcomed boys at the age of 13 because its primary responsibility was to fulfill prescribed ritual commandments. The confirmation ceremony provided a new ritual that would affirm a commitment to the Jewish tradition within the vocabulary and structure of American religious traditions and graduation celebrations.

In my Spring 2014 American Jewish History class, I asked students to use the archives at the University of Washington Special Collections to research local Jewish history and to build digital stories based on the archival material. I created this post as a sample for my students. Thanks to the New Media in Jewish Studies collaborative for its support of this project.

Want to see more articles like this?  Sign up for our newsletter!
⇒ Learn more about the Stroum Center for Jewish Studies at the University of Washington, our Sephardic Studies Program, or our Israel Studies Program.
Note: The opinions expressed by faculty and students in our publications reflect the views of the individual writer only and not those of the Stroum Center for Jewish Studies.
By Noam Pianko|2021-09-20T15:54:10-07:00September 11th, 2014|Categories: Digital Jewish Studies, Jewish History & Thought|Tags: American Jewish Community, History, Noam Pianko, Religion & Ritual, Seattle|1 Comment