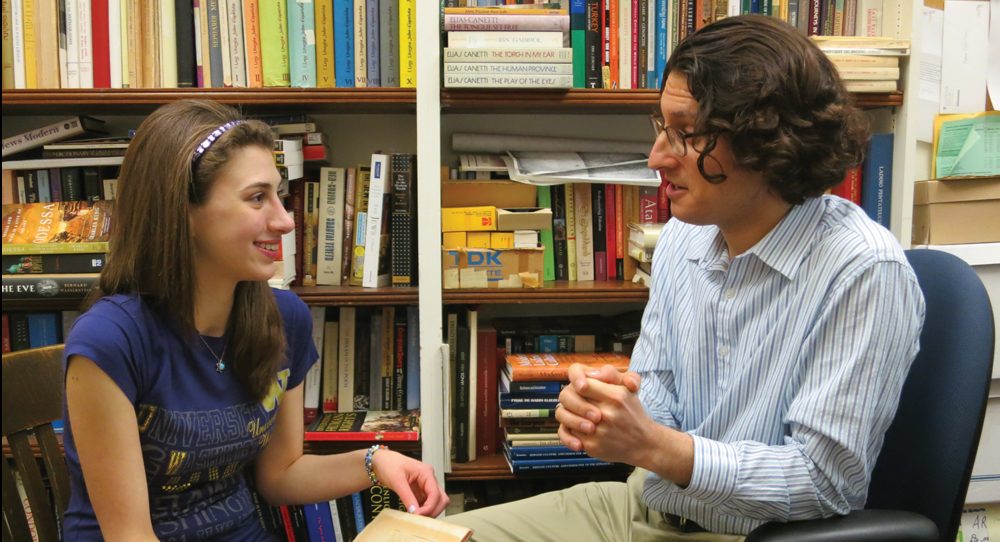 Ashley Bobman (’17) discusses her great-grandfather’s notebook with Professor Devin Naar, who supervised her exploration of Ladino and Sephardic history.

Both graduate and undergraduate students at the University of Washington engage in a wide range of original research projects in Sephardic Studies through coursework, independent studies, senior theses, master’s theses, and PhD dissertations. Students come from disciplines and departments across the university, including, but not limited to, History, Jewish Studies, Spanish and Portuguese Studies, Ottoman and Turkish Studies, Linguistics, French and Italian Studies, Near Eastern Languages and Civilizations, and Near and Middle East Studies. Many of the Sephardic Studies undergraduate and graduate student projects are highlighted on this website. 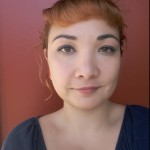 Esra is a PhD candidate in Near and Middle Eastern Studies in the Henry M. Jackson School of International Studies. She was the 2016-17 Robert and Pamela Center Fellow at the Stroum Center. She is writing her dissertation on the politics of infrastructure in the peripheral regions of Turkey and Israel. 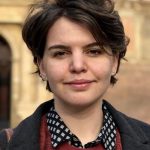 Canan is a fifth-year PhD student in the Interdisciplinary Program in Near and Middle Eastern Studies at the University of Washington and a 2019-2020 Stroum Center for Jewish Studies graduate fellow. Her dissertation, “Corporeal Constructions of Jewish Modernity and Marginality in Izmir, 1856-1914,” focuses on the experience of poverty and policies of intracommunal exclusion in the Jewish community of Izmir during the nineteenth century. 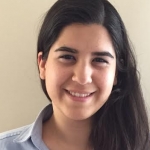 Berkay was the 2015-2016 Samuel and Althea Stroum Fellow in the Jewish Studies Graduate Fellowship. She is a PhD student in the International Studies Program of the Henry M. Jackson School of International Studies at the University of Washington. Her interest in foreign policy-making in the Middle East led her to research at the Moshe Dayan Center of Tel Aviv University in 2013 and the Institute for National Security Studies (INSS) in 2018. Her research is on decision-making mechanisms in Turkish foreign policy and Turkey-Israel relations.

Oscar earned his PhD in Near and Middle Eastern Studies at the University of Washington and is now an Assistant Professor of History at the University of Pennsylvania. As the Mickey Sreebny Memorial Scholar in Jewish Studies in 2013-2014, Oscar studied the original compositions of Yehuda Leon Behar in Ottoman Turkish, a project which helped to illuminate the culture and identity of the Jewish community during the late Ottoman Empire.

Molly graduated with a PhD in the Department of Linguistics in June 2019. Her M.A. thesis, “The Last Generation of Native Ladino Speakers? Judeo-Spanish and the Sephardic Community in Seattle” (2014) focuses on Seattle-area Ladino, and her doctoral dissertation, “Productivity, influence, and evolution: The complex language shift of Modern Ladino” (2019) explores the unique patterns in Ladino spoken in Seattle. Molly was instrumental in organizing International Ladino Day in Seattle since its inception. She now works as a linguist at Facebook in the Seattle area. 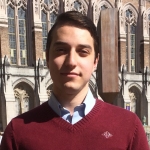 Ryan graduated from the University of Washington School of Law in 2018. He created the online Mapping Memory project, which traces the paths of World War II-era Jewish refugees across Europe. 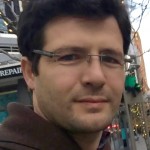 Ozgur is a doctoral student at the Henry M. Jackson School of International Studies, and was the 2016-17 I. Mervin and Georgiana Gorasht Fellow at the Stroum Center. 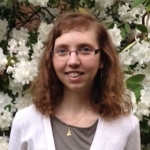 Christina received a research grant from the Stroum Center for Jewish Studies for her translation work on the Estrella Galante notebook. A former Richard M. Willner Memorial Scholar, Christina received her Ph.D in French from the University of Washington in December 2016.

Sarah Zaides joined the Stroum Center as its Associate Director in the Summer of 2017, after receiving her PhD in History from the University of Washington. Her dissertation, Tevye’s Ottoman Daughter: The Making of Ashkenazi and Sephardi Jews in the Shatterzones of Empire, 1882-1923, traces Russian Jewish routes of exit to Constantinople and the Anatolian borderlands in the twilight years of the Ottoman and Russian Empires. 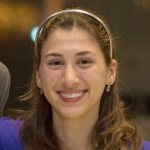 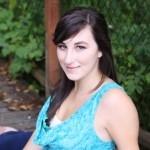 Alain Carmen Sykes
PhD Student in the College of Education: “Remembering the Past, Creating the Present: Constructing Salonica through Memoir.” (JSIS 578)

David Benitez, “Mapping the Jews from Turkey and Rhodes in Seattle: Insights from the United States Censuses, 1910-1940.” (HIST 498)

Anjelina Hill, “Sephardic Women: Their Journey from the Old Country to the Pacific Northwest.” (HIST 498)

Loveleen Kaler, “Together and Apart: Sephardic Jews and Greeks in the Puget Sound Region.” (HIST 498)

Josh Etseksen, “The Circulation, Price and Popularity of Jewish Newspapers and Books in the Ottoman Empire.” (JSIS 499)