Ashley Bobman, who will graduate from the University of Washington this week, has helped to create the first-ever online exhibit of the new Sephardic Studies Digital Museum. A Public Health major and Nutritional Science minor, Bobman spent three and a half years working with Prof. Devin Naar, chair of the UW Sephardic Studies Program at the Stroum Center, on an independent research project about the life of Albert D. Levy (1896-1963). Nearly four years of work have culminated in an impressive online exhibit, “A Sephardic Lighthouse: Albert Levy & The Sephardic Jewish Journey.”

The task of cataloguing and translating Albert Levy’s prolific Ladino output was especially meaningful because Levy, a prominent Sephardic journalist and community leader born in Salonica, was Ashley Bobman’s own maternal great-grandfather.

A profile in our Fall 2013 Newsletter (viewable at this link) detailed the chance meeting at a Hillel Shabbat dinner in Fall 2012, wherein Naar realized that the student at his table was related to Albert Levy, whose notebooks had just been rediscovered in a storage closet at Congregation Sephardic Bikur Holim in Seattle. Over the next several semesters, Prof. Naar, who is also an Assistant Professor in History and the Jackson School studying the transnational migrations of modern Jews, worked with Bobman on the finer details of Ladino, while also helping to contextualize Levy’s work in the historical landscape.

The exhibit contains fourteen distinct sections, with each page exploring a different aspect of Levy’s career. Scanned digital documents from the Sephardic Studies Collection at UW Libraries accompany Bobman’s narrative, bringing Levy’s words to life. Several Stroum Center staff members collaborated on realizing the vision for this first Digital Museum exhibit. Prof. Naar worked with Ty Alhadeff, the Sephardic Studies Research Coordinator, to locate the best archival items for each section. The Stroum Center’s media team, Hannah Pressman and Kara Schoonmaker, consulted with Naar and Bobman on ways to organize the material in a visually exciting way. Schoonmaker then designed and built the page over the Spring 2016 quarter.

Bobman explains the meaning behind the exhibit’s title: “One of the newspapers that he [Albert Levy] worked for was called El Luzero Sefaradi, which means ‘The Sephardic Lighthouse’, and while it wasn’t a paper that was around for all that long, it—to me at least—really reflected what he did. A lighthouse is a beacon of light; it draws your eyes to things and brings them to your attention, and that’s exactly what I felt like he was doing with his works. That lighthouse just seemed very representative of him, and it also happened to be the name of one of the papers that he worked for.”

Last month Bobman presented her research on Levy to the Jewish Genealogical Society of Washington State. Her talk included the beta model of the “Sephardic Lighthouse” exhibit. “Online archives are the way to bring everyone together, no matter where they are,” she said. 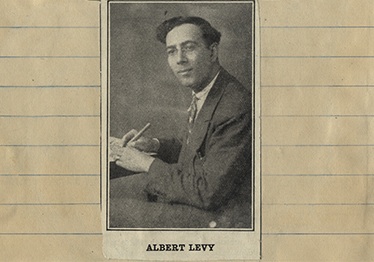 Sephardic educator and writer Albert D. Levy, in a photo from one of his scrapbooks. Photo courtesy of the UW Sephardic Studies Collection.

Learning Ladino (also known as Judeo-Spanish or Judezmo) was a challenge at first. Bobman had a background in high school Spanish and the Hebrew alphabet, but had to work hard to learn Rashi script in order to read Ladino. Her persistence paid off, however: she has successfully translated several of Levy’s works, such as this poem about Sultan Bayezid II and the Spanish exile. Even more impressively, Bobman is now one of the very few people in the country who is able to write original poetry in her ancestors’ language, both in Latin letters and in meruba (block type). One of these original Ladino compositions, “Muestra Kultura (Our Culture),” has been published on our website as a companion piece to the “Sephardic Lighthouse” exhibit.

For her academic rigor and service to the community, last year Bobman received the prestigious President’s Medal for outstanding sophomore student at UW. She will attend Yale University this fall to pursue a Masters of Science in nursing. However, via cross-country coordination with Prof. Naar, she hopes to continue both her original Ladino poetry writing as well as her work translating her great-grandfather’s copious output.

Prof. Naar, reflecting on his stellar student, said, “Over the past four years, it has been an absolute pleasure and wonder for me to see Ashley delve into the world and writings of her great-grandfather and bring them back to life for us today. Not only has Ashley produced thoughtful translations of Albert Levy’s Ladino poetry, but she has also provided important context that helps us understand the social, political, cultural and religious environments that shaped him and his life path. Through Albert Levy, Ashley offers us a microcosm of the Sephardic experience in the twentieth century—and beyond.”

He continued, “More than an excellent project of undergraduate scholarship that will engage and educate the public, Ashley’s endeavor has also became an act of cultural reclamation. I hope that Ashley and her work will inspire other students, here and elsewhere, to delve deeper into Sephardic culture and the Ladino language and make their own contributions to the documentation and resurgence of this rich heritage. Ashley: Mazal alto ke tengas!”

Finding Faith in a New Country 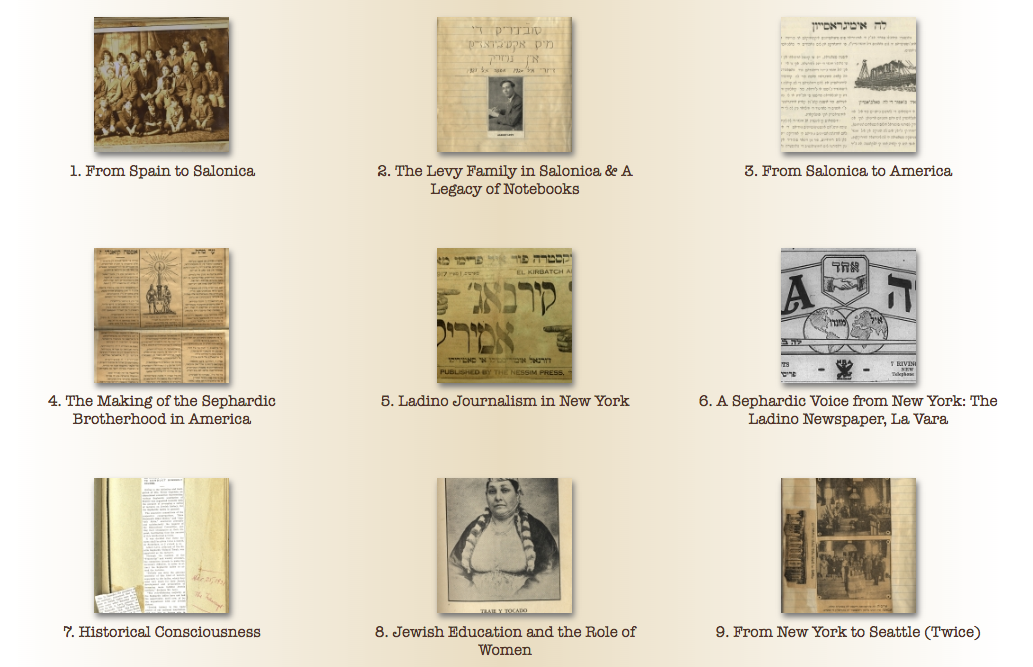 The structure of the “Sephardic Lighthouse” exhibit allows for dipping in and out of the various sections. A particularly poignant memento highlighted in Section 13, “A Notebook of Inspiration,” was lent to the Sephardic Studies Program by Bobman’s aunt, Linda Robke. The small notebook contains quotes that Levy gathered throughout his life, perhaps to include in his public lectures. Bobman observes that while “the first half is penned in Ladino, in soletreo (the handwritten Sephardic style of the Hebrew alphabet), the second portion of the notebook is in English, the language Levy increasingly adopted in the United States” after arriving from Salonica in 1916.

From Plato to Confucius, Ben Franklin, and George Bernard Shaw, the pocket-sized notebook makes clear that Levy drew inspiration from a melting pot of non-Jewish sources as he made his way in his new country. Many of the quotes are optimistic and reflect the importance of faith, as in this well-known quote by the theologian Reinhold Niebuhr: “God grant me the serenity to accept the things I cannot change; the courage to change the things I can; and the wisdom to know the difference.” For a transplanted Sephardic cultural activist, first in New York and later in Seattle, this cri de coeur may have had particular resonance, as Albert Levy helped his community maintain its unique traditions while also integrating into the new fabric of twentieth-century America.

Thanks to Ashley Bobman’s pioneering work, Levy’s Sephardic Jewish journey will now be accessible to anyone around the world who is interested in meeting this remarkable historical figure. Mazal alto, indeed!

Want to see more articles like this?  Sign up for our newsletter!
⇒ Learn more about the Stroum Center for Jewish Studies at the University of Washington, our Sephardic Studies Program, or our Israel Studies Program.
Note: The opinions expressed by faculty and students in our publications reflect the views of the individual writer only and not those of the Stroum Center for Jewish Studies.
By Hannah Pressman|2018-08-05T21:58:47-07:00November 4th, 2016|Categories: Sephardic Studies, Video|Tags: American Jewish Community, Devin Naar, Ladino, Sephardic, Ty Alhadeff|1 Comment