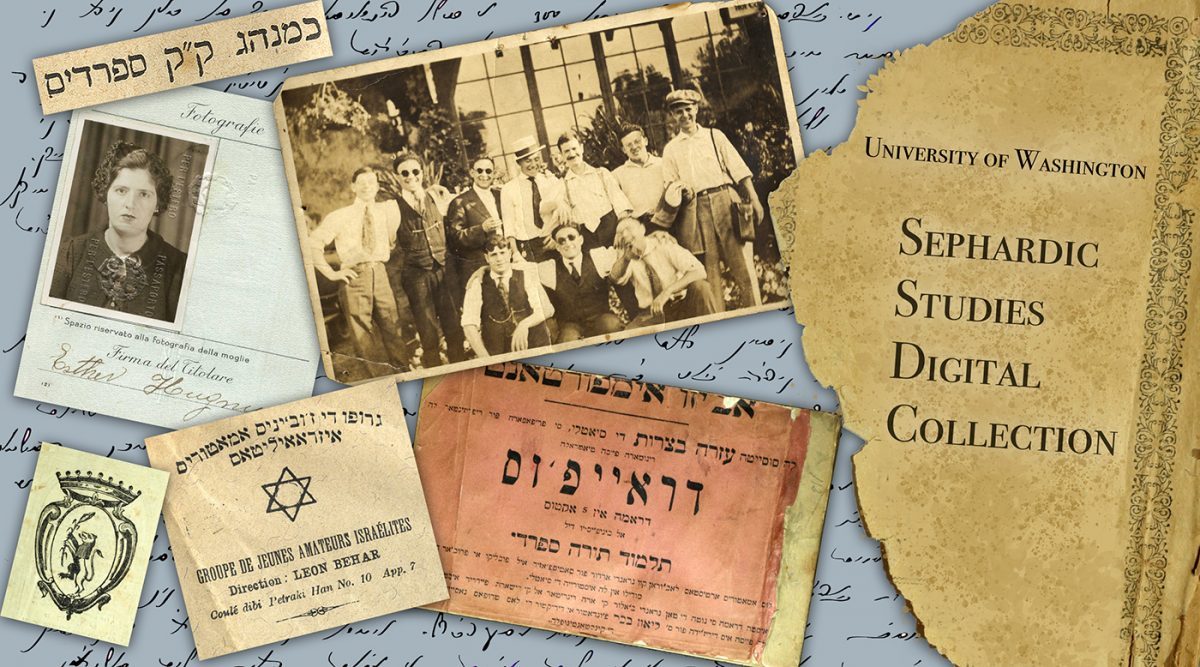 “Tell me what you read, and I will tell you what you think.” (Ladino Proverb)

The Sephardic Studies Digital Collection (SSDC) at the University of Washington serves as a bulwark against the loss of culture, language, and history. As the world’s first major digital repository of sources pertaining to the largely invisible yet historically significant Sephardic Jews of the Mediterranean world, the SSDC includes key books, archival documents, and audio recordings that illuminate the history, culture, literature, politics, customs, music, and cuisine of Sephardic Jews all expressed in their own language, Ladino. The artifacts offer Mediterranean views of major political, cultural, social, and economic transformations from the 17th to the 20th centuries articulated in a Spanish-based language utilized by Jews living in the Muslim world. In short, these texts challenge us to reconsider popular and scholarly assumptions about the relations between Jews and Islam as well as Europe, the Middle East, and the United States — past and present.

Since their expulsion from Spain in 1492, Sephardic Jews have produced a vast literature — religious and secular, philosophical and fictitious, political and poetic — that provide insight into their worldview in their own language, known as Ladino (Judeo-Spanish or Judezmo). Bibliographers estimate that Sephardic Jews published approximately 4,000 books and 380 newspapers in Ladino from the 16th to the 20th centuries. Yet until now, the written record of the experiences, anxieties and aspirations of Sephardic Jews remain dispersed and largely shrouded in mystery. As the last generation of native Ladino speakers leaves us, and the present generations no longer have immediate access to their literary and linguistic heritage, we face a major turning point and a choice: relegate to oblivion the language and the world it represents, or make a concerted effort to collect, preserve, and disseminate that legacy for future generations, students, and scholars around the world.

Chaired by Professor Devin Naar, the Sephardic Studies Program of the Stroum Center for Jewish Studies housed within the Jackson School of International Studies at the University of Washington opts for the latter path by embarking upon the creation of the first digital portal into the Sephardic world. Assembled from the bookshelves, closets and basements of residents and institutions in the greater Seattle region, and increasingly elsewhere in the country and abroad, the SSDC constitutes one of the largest digital Ladino repositories in the United States, currently comprising 403 digitized Ladino books that constitute “The Library” and 706 additional documents that constitute “The Archive,” and 245 audio files. The collection sheds light on the lesser known history and culture of Sephardic Jews and has sparked renewed interest among scholars, educators, librarians, artists, cultural activists and community members alike. 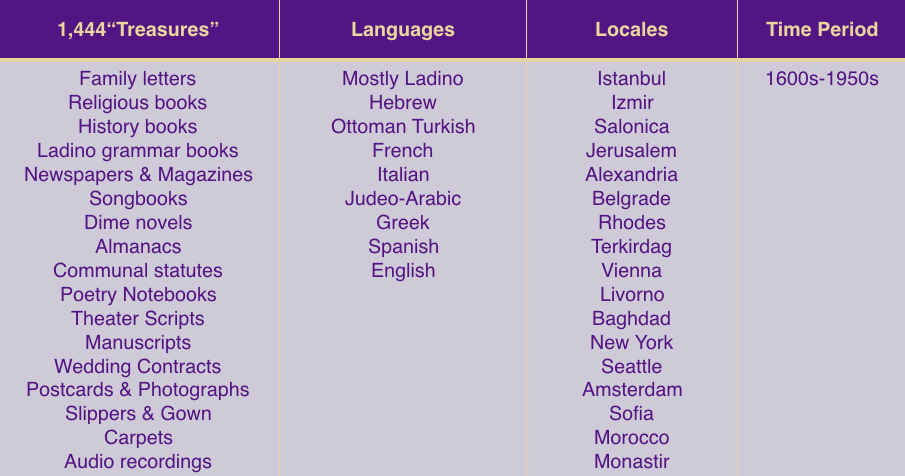 Chart showing the varied items in the SSDC. All will eventually be accessible to students and the public through a partnership with UW Libraries Digital Collections.

The SSDC showcases a wide array of published and unpublished materials, including novels, prayer books, bibles, manuscripts, letters, newspapers, magazines, songbooks, poetry, theater scripts, marriage contracts, photographs, postcards, and books on religion, history, grammar and more. In addition to Ladino, the languages contained in these documents include Hebrew, Aramaic, Turkish, Arabic, Yiddish, French, English, Greek and Italian. Most of the artifacts originated in the former Ottoman Empire, while others were published in Vienna, Livorno, Seattle, New York, Baghdad, and Amsterdam. The first samples of the digital artifacts are available through the University of Washington Libraries Digital Collections.

Our goals include rendering our vast corpus of materials accessible online through the University of Washington Libraries CONTENTdm portal and to provide comprehensive metadata for our materials. Scholars, students, librarians, cultural activists, and interested citizens alike will then be able to easily access Ladino materials from anywhere in the world. Through faculty and student blog posts on the Stroum Center’s website, we are able to bring these curated pieces to light in an accessible way.

Our first posts highlight some of Seattle’s own “Sephardic Treasures.” Professor Naar wrote about the Guide for Sephardic Immigrants from 1916, while former undergraduate Ladino student Ashley Bobman contributed Found in Translation: Ladino poem about Spanish Exile — wherein she translated a poem written by her own great-grandfather, Sephardic cultural activist Albert D. Levy. Graduate research is an area of exciting growth for UW Sephardic Studies: Sarah Zaides Rosen, who earned her Ph.D. in Jewish studies at the UW, published a study of Ladino school books used in the Ottoman Empire. Her piece Learning Ladino — Then and Now was republished by Mosaic Magazine, an online Jewish thought journal. Current staff members such as Ty Alhadeff have published articles on the trajectories of the Sephardic community in Seattle, including The Flavor of Rhodes: Paradise Lost, Recipe Saved, one of the site’s most popular articles, which tells the story of a local family from Rhodes through unique family artifacts.

In the future, we also envision the development of robust, online, curated exhibitions highlighting various aspects of Sephardic literature, language, history, culture, and customs, and hope to utilize the latest technology to promote the acquisition and study of the Ladino language, including the creation of a comprehensive, online, open access Ladino dictionary as well as optical character recognition (OCR) technologies for Ladino.

To ensure academic excellence, and in recognition of the unprecedented advances already made by the Sephardic Studies Program at the University of Washington, top scholars in the field of Sephardic Studies from across the world have agreed to serve as academic advisors throughout the development of the SSDC:

The Sephardic Studies Collection has been made possible through the generosity of our community supporters, and in particular the Sephardic Studies Founders’ Circle: the Isaac Alhadeff Foundation, Eli and Rebecca Almo, Joel and Maureen Benoliel, Harley and Lela Franco, Richard and Barrie Galanti, and Sharon and Marty Lott.

This also means that things that are obvious to you may not be so clear to others. Try to look at your draft as if through someone else’s eyes, for example, a student from another department of your own faculty: would he understand your story? The rule of self-sufficiency means that readers or listeners of your thesis should understand, in the end, exactly artist thesis what you wanted to say, and not half or ten times less than that. How to achieve this? 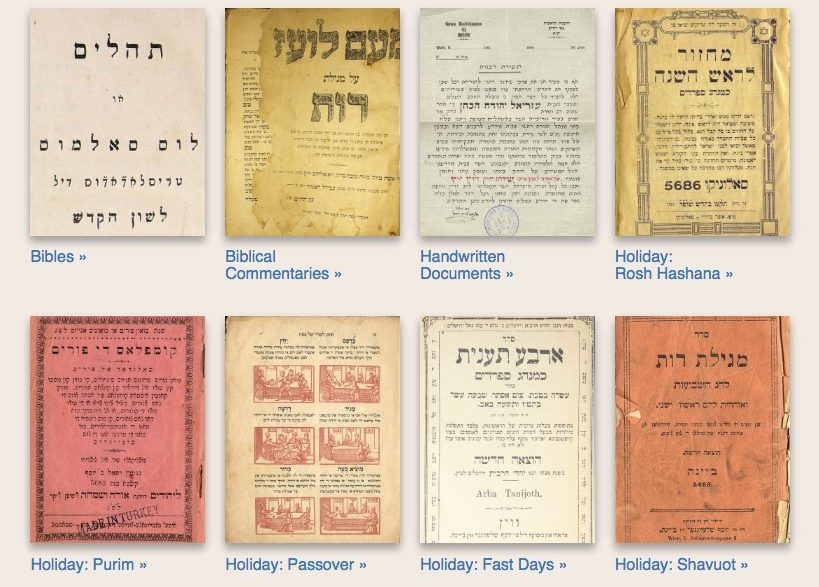