The Stroum Lectures in Jewish Studies are an annual series of talks given by luminaries in the field of Jewish Studies, hosted by Stroum Jewish Studies at the University of Washington. For more than forty years, through the generosity of Samuel and Althea Stroum, Jewish Studies has been able to bolster public scholarship around Judaism. View highlights from the past thirty years below, or scroll further to learn more about the history of the lectures and view the full archive.

Professor Michael Walzer of the Institute for Advanced Study at Princeton discusses "Biblical Politics" in this 2008 Stroum Lectures series.

Novelist and literary scholar Dara Horn explores the role Hebrew can play in a living contemporary American Jewish culture in this 2016 Stroum Lecture.

Professor Ilan Stavans discusses the opposing sides of Hebrew as a divine language and a human language in this 2016 Stroum Lecture.

Professor Ruth Behar moves between the personal essay and poetry, history and ethnography, exile and disaspora in this 2015 lecture series.

History of the Stroum Lectures 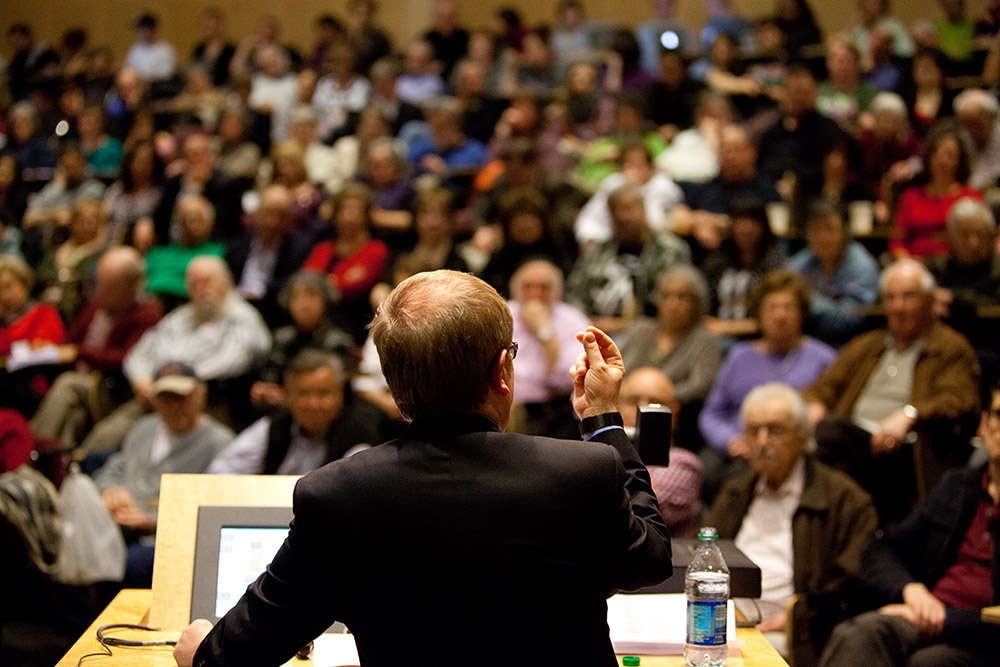 It has been over 30 years since Murray Shiff, then Executive Director of the Jewish Federation of Greater Seattle, and Edward Alexander, chair of the Jewish Studies Committee at the UW, got an idea that was quite ambitious for a relatively small and isolated Jewish community: to bring to the UW each year an internationally-known Jewish studies scholar for a series of lectures – lectures that would reach not only the Seattle community but, through publications, a nationwide audience as well.

Shiff asked one person after another for the financial resources needed. One after another, they turned him down – until he talked with Sam Stroum, who proved willing to add support for what became the Samuel & Althea Stroum Lectureship in Jewish Studies to the very long list of worthy causes to which he was already committed. The lectures have put the Center, the UW, and Seattle on the Jewish Studies “map” worldwide.

With the Stroum’s support, The University of Washington Press has published over 16 books based on the lectures; the books have collectively sold tens of thousands of copies. Several have won national book awards, and many are used in university courses around the country. To learn more about the series, visit the UW Press website.

Jewish Manuscripts in the Digital Age: The Cairo Geniza and the New Materiality

May 14
Lost Archives, Sacred Wastebins, and Jews of the Medieval Islamic World

May 16
The Cairo Geniza and the New Materiality

May 7
Failure is an Option: Immigration, Memory and the Russian Jewish Experience

May 9
I Alone Can Fix It: Tales from the New Dystopia

May 21
Spinoza as a Revolutionary Thinker

May 23
Jewish Emancipation & the Radical Enlightenment

May 23
Living in Hebrew – Dara Horn

May 24
Dying in Hebrew – Ilan Stavans

May 18
Places: Loss and Memory

“School Photos and Their Afterlives: A Comparative Jewish Perspective”

March 31
School Photos in the Era of Assimilation: Jews, Indians, and Blacks

April 2
Framing Children: The Holocaust and After

October 22
A Remarkable Modern Jewish Book and its Entrepreneurial Author

October 24
Who Were the Readers of Sefer ha-Brit and Why Did They Read it?

April 23
Devotion, Distancing and Disloyalty: The Diversity and Complexity of American Jews’ Relationships with Israel Today

April 25
Jews in the Borderland: The Complicated, Fluid, and Episodic Nature of Jewish Identity Today

“Revivals and Awakenings in American Judaism”

May 11
The Reshaping of American Judaism

“Agnon’s Moonstruck Lovers: the Song of Songs in Israeli Culture”

These lectures are available as audio recordings

April 25
‘Upon the Handles of the Lock’: Agnon, Balak and the Israeli Bible

“Encounters with the Past: Remembering the ‘Bygone’ in Israeli Culture”

May 17th
Bridges to Antiquity

May 19th
Mirrors of Galut (Exile) in the Homeland

May 21st
When the New Becomes Old

Part 1
Where Were the Elders?

Part 3
The Meaning of Kingship

“Creation, Revelation & Redemption: The Religion of the Dead Sea Scrolls”

Part 1
God, Humanity and the Universe in the Dead Sea Scrolls

Part 2
Scripture, Law and Life in the Dead Sea Scrolls

Part 3
Apocalyptics, Messiahs and the End of Days

“Speaking in Tongues: Translating Yiddish in the 20th Century”

Part 1
How Tevye Learned to Fiddle

Part 2
Remembering the Past in Yiddish

“Sephardi Jewries and the Holocaust”

Part 2
Rhodes: The Island of Memory

Part 3
North African Jewry and the Trauma of WWII

“Find Yourself a Teacher: The Mentor/Disciple Relation in Classical Jewish Thought and Contemporary Practice”

Part 1
Centrality of Jewish Values in Shaping the Jewish Future