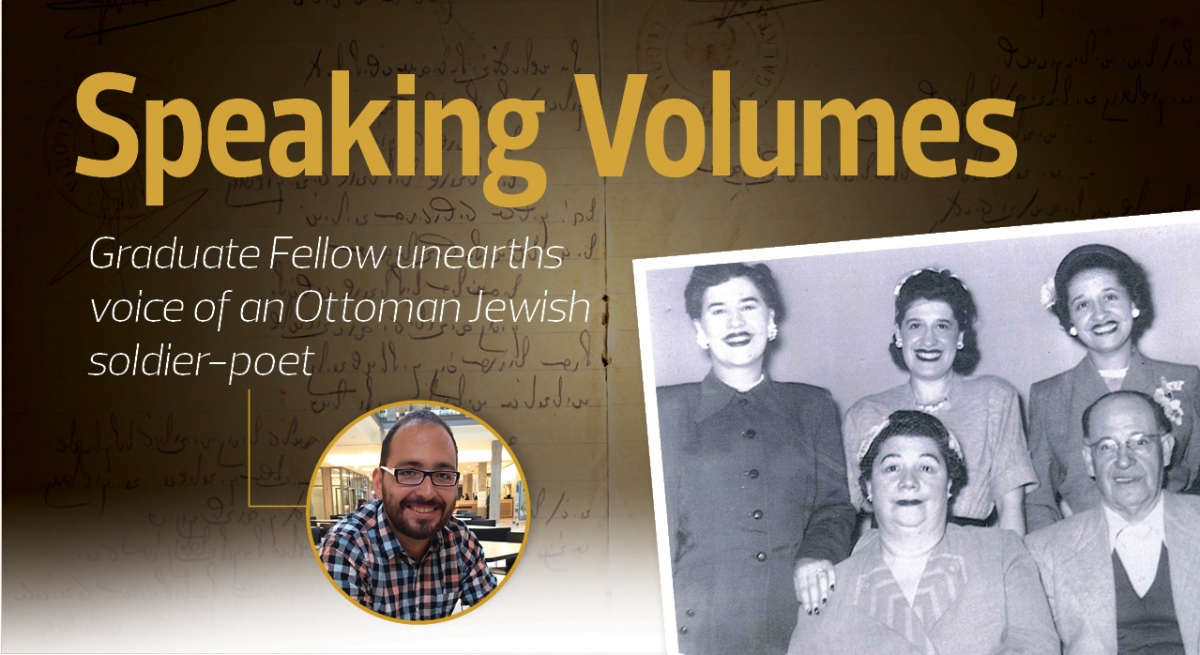 If the pages of the Yehuda Leon Behar notebook could talk, they would have an amazing story to tell.

Behar was a Jewish soldier who fought for the Ottoman Empire in the Balkan Wars (1912-1913). He later immigrated from Istanbul to Seattle and directed the city’s Ladino theater group. Prior to leaving Turkey, he penned a series of poems about war, Jewish identity, and national belonging.

Now, a hundred years after Behar’s military stint, his Seattle descendants have generously made his notebook available for digitization and study through the UW Sephardic Studies Program’s Digital Library and Museum. And, thanks to support from the Mickey Sreebny Memorial Scholarship at the Stroum Center, Behar’s poetic voice has found an ideal interpreter in PhD student Oscar Aguirre-Mandujano.

A native of Mexico City, Aguirre-Mandujano grew up speaking Spanish and Hebrew. For his masters and doctoral work in Ottoman Studies, he gained fluency in an astounding number of languages: classical Ottoman, Arabic, Persian, and Karamanlidika (Turkish written in Greek script), as well as modern English, Turkish, Persian, and Italian. He has been a standout student in the UW’s Interdisciplinary Program in Near and Middle Eastern Studies since his arrival in 2011; he has also been integrally involved with the Turkish and Ottoman Studies Program, which is based in the Department of Near Eastern Languages and Civilization (NELC) and ranks among the top such programs in the country.

Aguirre-Mandujano’s PhD research focuses on a far-off time and place: the Ottoman court culture of the 15th century. His dissertation, “Poetry and Politics in the Early Modern Ottoman World: The Court of Bayezid II (r.1481-1512),” probes how Ottoman poetry discussed and transformed political ideas. He looks particularly at literary texts produced by the palace elite, “trying to see how the production of poetry and literary prose was a political act in the Ottoman world.” This project builds on his MA work, wherein Aguirre-Mandujano focused on border narratives and the intense interaction between various religious groups in the Ottoman Empire. 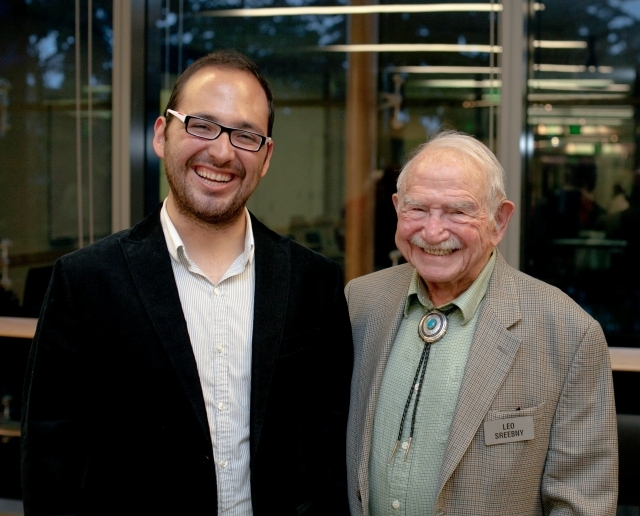 As soon as he met Aguirre-Mandujano in a graduate seminar in the spring of 2012, Prof. Devin Naar knew that this was the perfect student to undertake a critical study of Behar’s poetry. Prof. Naar quickly surmised that Aguirre-Mandujano had the language background to understand Ladino (the Judeo-Spanish dialect of Sephardic Jews), as well as the rigorous training necessary to analyze Ottoman Turkish (the official language of the Ottoman Empire between the 14th and early 20th centuries). Both languages appear alternatingly in Behar’s notebook, providing linguistic evidence of the Ottoman-Jewish soldier’s dual cultural allegiances.

Naar, the chair of the Stroum Center’s Sephardic Studies Program, offered to supervise Aguirre-Mandujano’s work on the Behar notebook. His initial research assistantship was funded by the Mitchell F. and Sophie Wise Ehrlich Student Support Fund in Jewish Studies, thanks to the generous support of Arlene B. Ehrlich. Soon after, Aguirre-Mandujano was awarded the Sreebny Scholarship for 2013-14. One of five competitive graduate student grants offered by the Jewish Studies Graduate Fellowship last year, the Sreebny Scholarship made an immediate impact on Aguirre-Mandujano’s academic plans. He says, “The fellowship gave me the possibility of opening a space in my year for a project I really wanted to do. It provided a clear structure to develop my research on Behar, as well as the space to get feedback and advice in addition to Devin’s very helpful guidance.”

The rest, as they say, is history—or history in the making.

Autobiographical Poems of Citizenship and Community

The turn of the twentieth century was a time of formal transformation for poetry around the world. It was also a time of political transformation for the Ottoman Empire and its Jewish residents. Following a series of decrees in the 19th century that had gradually expanded their civil and political rights, Ottoman Jews hoped that they would finally be accepted as full citizens during the empire’s Second Constitutional Period (1908-1920). Military service was the last legal duty required for full citizenship during this period.

Enter Yehuda Leon Behar, a Jewish soldier who wrote poems in Ottoman Turkish, the language of the majority culture, in order to convince fellow Jews to embrace their status as Ottoman citizens.

For Aguirre-Mandujano, Behar’s linguistic choice is highly noteworthy. As he wrote in the paper he presented at the May 2014 Jewish Studies Spring Research Symposium, “Behar’s poems are at all times Ottoman, and not only in language. They narrate the history of the war from an Ottoman perspective and celebrate the victories of the Ottoman army. These poems are the songs sung by an officer who takes personal pride for the victories of his nation, which is, clearly enough, the Ottoman nation.” 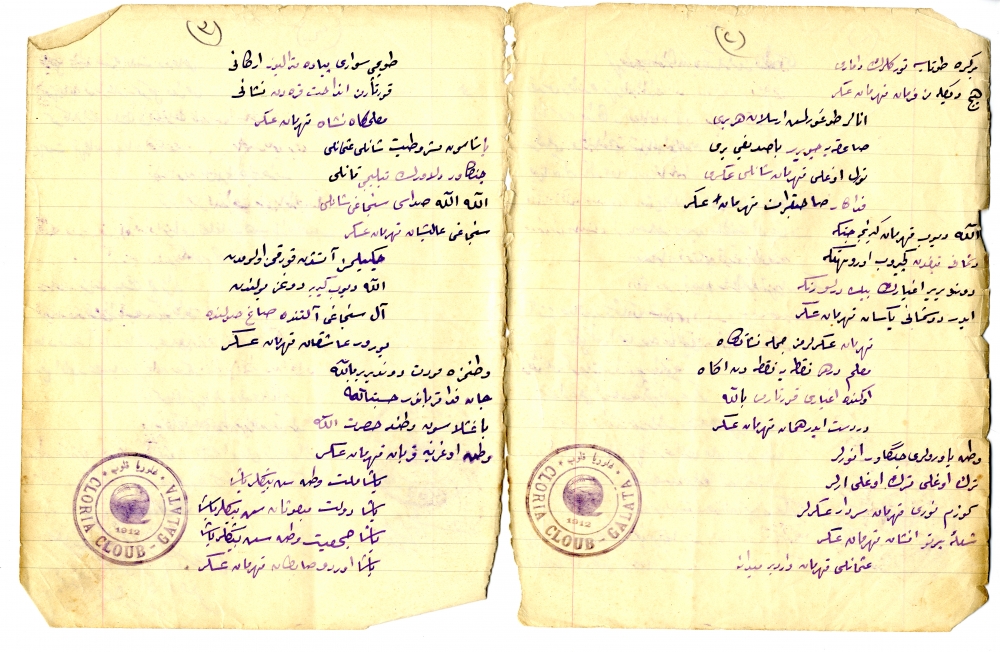 A page of Ottoman Turkish handwriting from the notebook of Yehuda Leon Behar. Courtesy of the Sephardic Studies Digital Library and Museum.

Behar’s signature, included after every Ottoman poem in the notebook, affirms the extent to which his national and military statuses are ingrained with his personal identity: “Yehuda Leon Behar. Küçük Zabit. Topçu. Batarye.” Aguirre-Mandujano translates these words as “Minor officer. Artilleryman. Battery Division.” He explains, “By signing the poems, Behar not only actively owned them, but he also contextualized them by including his military rank and expertise. These were the poems of a member of the Ottoman Army.”

Aguirre-Mandujano believes not only that Behar’s Ottoman verses are his original creations, but also autobiographical—and therefore, an extremely valuable example of modern Jewish textual self-representation.

The rhetoric of certain poems clearly advocates Jewish integration in the wider Ottoman society—a platform shared with other Ottoman-Jewish writers of the period, such as the politician and scholar Avraham Galante. Behar seeks to persuade his fellow Jews in Istanbul to see themselves as Ottomans. On this level, Aguirre-Mandujano says, the Behar notebook comprises “an appeal to the Jewish community to adhere to the Ottoman society, to learn its language and embrace the new Ottoman nation with love and pride. It is a hopeful call for peace and friendship among nations.”

Prof. Naar, who is the Marsha and Jay Glazer Endowed Chair in Jewish Studies and Assistant Professor of History at the UW, has high praise for his protégé: “Oscar’s groundbreaking work on Behar’s notebook and poetry has the potential to completely transform how scholars understand the relationships between Jews and the Ottoman Empire in the early twentieth century; Jewish cultural productivity in the Ottoman Turkish language; and Jewish participation in the Ottoman military. Until now, scholars have assumed that Jews rarely became literate in Ottoman Turkish and went out of their way to avoid military service. But Oscar has revealed through Behar’s poetry the voice of a self-affirming Jewish man who also saw himself as an Ottoman patriot and warrior and wrote poems in Ottoman Turkish to prove it.”

A Legacy of Learning

That such a richly-textured worldview can be contained within one small notebook is precisely the point of creating the Sephardic Studies Digital Library and Museum. This initiative, in collaboration with the UW Libraries Digital Collections, seeks to preserve and disseminate rare works in the Ladino language and others that focus on all aspects of the Sephardic experience. Behar’s notebook and other Sephardic cultural items that have been painstakingly scanned by the project’s research team will eventually be available for free to students and scholars around the world.

From the beginning, Naar’s archival project has been supported and sustained by members of the Seattle Jewish community, many of whom have also provided family heirlooms to be included in the Digital Museum. The Sephardic Studies Founders Circle has been especially instrumental in making the UW Sephardic Studies Program a reality. Says founding member Harley Franco, “For the university to be able to bring in a world-class professor like Professor Naar, and a program like the Jewish Studies Program—it’s just phenomenal, and it’s very easy to get behind it.” 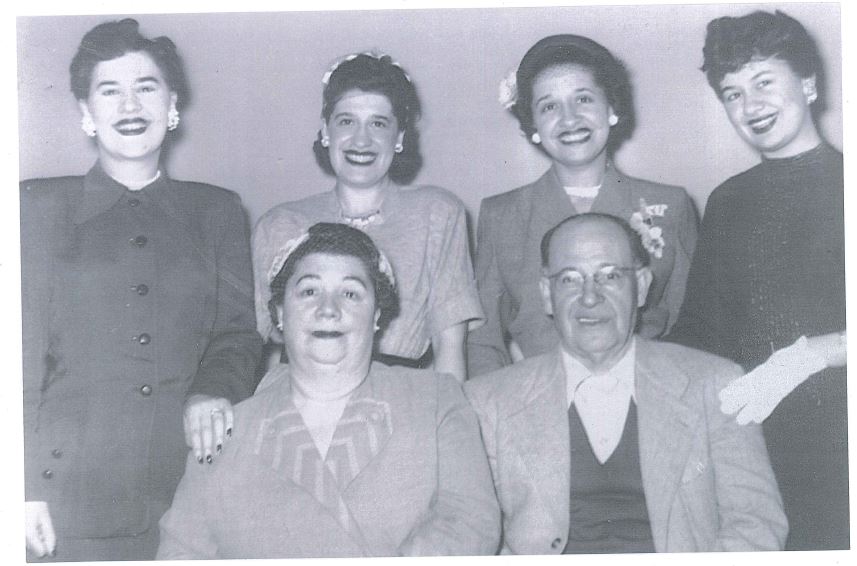 For the families who provide their archival materials for the Digital Library, the process can be just as revelatory. Robin Agoado Roberts, one of Leon Behar’s granddaughters, says that her grandfather never discussed his army years with his family in Seattle. “I had no idea he was into politics. Now, thanks to Oscar, I’m learning more and more about him.” She remembers Leon Behar as a storyteller with a playful personality, a big heart, and a great imagination: “He always had a little piece of paper to jot down poems; he would sit at the counter of his store and write. He mostly wrote in English, but sometimes he wrote in Ladino too.”

For Roberts, Oscar Aguirre-Mandujano’s work is shedding new light on the poetry Leon Behar wrote before arriving in Seattle—verses that she saw in the notebook preserved by her mother Josephine, but that she could never understand until now. She adds, “All of us in the family are excited that people want to know his story.”

As Aguirre-Mandujano has shown, compelling material will draw talented scholars into the Sephardic Studies field, and he is among a growing cadre of UW graduate students with significant research projects in the works supervised by Prof. Naar. For many of these students, the UW Stroum Center provides a crucial framework and support for interdisciplinary work.

Aguirre-Mandujano emphasizes, “It is thanks to the partnership among Jewish Studies, Near and Middle East Studies, and Turkish and Ottoman Studies that I have been able to acquire the interdisciplinary training I need to deeply understand Ottoman Jewish history. This training has complemented the guidance provided by Prof. Selim S. Kuru, director of NELC’s Ottoman and Turkish Studies Program, in helping me acquire the skills required to read and interpret the poetry of the Ottoman Empire.”

Reflecting on his year in the Jewish Studies Graduate Fellowship, Aguirre-Mandujano says that the Behar study has been among the most meaningful milestones of his academic career.

It is quite fortunate for scholars and devotees of Sephardic culture that Aguirre-Mandujano is now using his most personal languages for public scholarship. Says Naar, “With the careful interpretation and translation skills of a literary scholar, and the contextualization of a historian, Oscar brings Behar’s voice back to life, and along with it, the lost world of Ottoman Jewry that continues to echo right here in Seattle.”

A version of this article originally appeared in the Fall 2014 Newsletter of the UW Stroum Center for Jewish Studies. View the Fall Newsletter here.

Want to see more articles like this?  Sign up for our newsletter!
⇒ Learn more about the Stroum Center for Jewish Studies at the University of Washington, our Sephardic Studies Program, or our Israel Studies Program.
Note: The opinions expressed by faculty and students in our publications reflect the views of the individual writer only and not those of the Stroum Center for Jewish Studies.
By Hannah Pressman|2017-09-04T22:42:04-07:00November 10th, 2014|Categories: Digital Sephardic Treasures, Sephardic Studies|Tags: Devin Naar, Graduate Fellows, Hannah Pressman, Ladino, Oscar Aguirre-Mandujano, Seattle, Sephardic|6 Comments