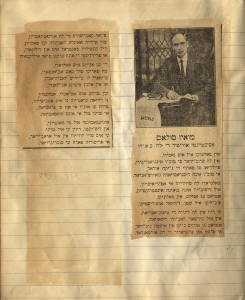 Ultimately, the American Ladino press became dedicated to unifying the Sephardim through the common struggles they faced upon immigrating, a goal shared by Levy and carried out in his most important publishing endeavor, La Vara, the longest running Ladino newspaper of the United States. Founded in 1922 and co-edited by fellow Salonican Jewish activist Moise Soulam, this New York City weekly became the last Ladino newspaper published in Hebrew letters in the world. With the last publication of La Vara in February of 1948 came the end of the Ladino press in America. Although published in New York City, La Vara was a national Sephardi newspaper in the United States with subscribers all across the country—and beyond.

The first issue of La Vara came out on Friday, September 1, 1922. Its stated purpose was to flesh out the truth and bring down the hypocrites. On the front of this first issue the subheading read: “and you will take the stick in your hand and you will whack them and not let any hypocrite remain in health.” The journal existed to improve the status of the community through satire and criticism. Even the masthead depicts the satirical nature of the writing. Above לה ב׳׳ארה a picture of a winged woman (an angel or perhaps a Greek goddess) hits a man on the head with an extremely large stick. Then intertwined in the letters of לה ב׳׳ארה are various cartoon heads, all smiling and making funny faces, with a joker/clown peeking out from behind the ה.

The playful masthead of this humorous paper remained as such until 1934, after the rise of Hitler, at which point it was redone in a more serious tone. The new masthead was much more reserved, depicting two hands shaking with the word, in Hebrew, אחד ,“unity.” Additionally the image contains two globe halves with a stick connecting them. This stick, which previously had a satirical role on the mast, now lies between the two globes. Perhaps the satirical stick with which to whack the hypocrites now represented what held the world together. 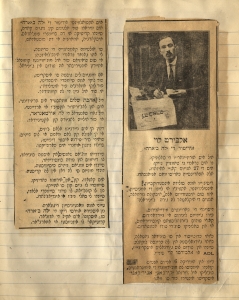 La Vara targeted all classes of the Sephardic American population, and in particular the working classes. Numerous advertisements request women for work in cleaning, sewing, and textiles. While La Vara included mostly Ladino words as well as some Hebrew words/phrases, such as the date, the journal also tried to write a lot of English words in Ladino, in Hebrew letters, such as Dahntahn (“downtown”). This serves as an attempt to incorporate English into the Sephardic culture. In terms of content, there were clear themes that reflected Levy’s vision of Sephardic values and the history of the Sephardim.Rather than write in a dry manner, much of Levy’s writings were masked in satire, accomplished without detracting from his ultimate goal. Through themes of historical consciousness, the customs and language of the Sephardim, Jewish education and morality, and more, Levy helped to reinforce his readers’ sense of connection to the Sephardic community while also encouraging them to embrace their new lives in America.