9. From New York to Seattle (Twice) 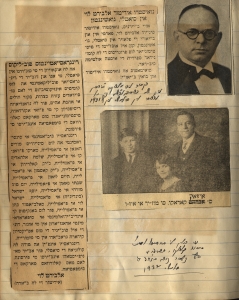 Dedicated to La Vara and the New York Sephardic community, Levy earned a reputation as an outstanding teacher and leader. His cultural activism gained him such great recognition that in the early 1930s, when the Sephardic Talmud Torah (a religious school) was established in Seattle, Levy was invited to move to Seattle to become the director. Thus began a new chapter in the life and work of Albert Levy, who relocated along with his family from New York to Seattle in the midst of the Great Depression to try to further the educational and intellectual standing of the largest Sephardic Jewish community in the Pacific Northwest. 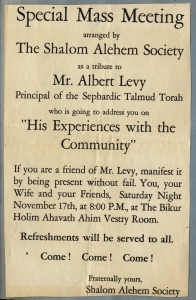 Publicity for a lecture by Albert Levy, principal of Talmud Torah.

Most of the initial Sephardim in Seattle had come from the Ottoman Empire, but organized themselves into two (and at certain points, three) separate congregations according to the specific places from which they came, either the island of Rhodes, or a number of towns near Istanbul, in what became Turkey. As a Salonican native, Levy existed as an “outsider” and as someone whom it was hoped would mediate between the two communities and help better unite them. The Jewish Transcript of Seattle reported that, as principal of the Sephardic Talmud Torah, Levy introduced reforms that facilitated “a solid system of co-operation and mutual understanding by the various groups” (Jewish Transcript, Dec. 4, 1931). The cooperation sparked the reorganization and advancement of the Talmud Torah. Under Levy’s leadership, the Sephardic Talmud Torah greatly improved its educational program and enrollment. What began with only seven students grew to sixty thanks to Levy (Jewish Transcript, March 1938); boys and girls voluntarily came to learn Hebrew from Levy. 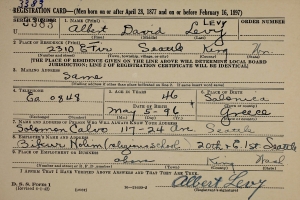 In his master’s thesis, completed for the University of Washington in 1939 on the history of the Sephardic Jews of Seattle, Albert Adatto recognized Levy as the most competent teacher in the Seattle Sephardic community during the 1930s. Adatto recounted that Levy had an amazing teaching ability in addition to knowledge of many languages, including Hebrew, Spanish, French, Arabic, and Greek, and was warmly welcomed. Often he was called upon to speak in Ladino and, according to Adatto, this was the first time in many years the Sephardim in Seattle heard competent lectures in Ladino. Adatto also notes, however, that Levy did not achieve such high status without some controversy. 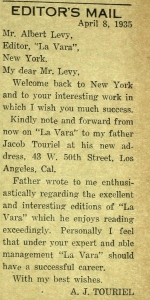 Letter to Albert Levy following his return to New York

Sadly, a misunderstanding led Levy to eventually resign from the Talmud Torah and return to New York in 1934. According to Albert Adatto, Levy’s departure left the Seattle Sephardic community in disarray. During his absence, the community became more divided. Eventually, though, in 1938, Levy returned to Seattle, although he continued to serve remotely as the editor of La Vara back in New York. This time, Levy took on the role of educational director for one of the two Sephardic congregations in Seattle, the Sephardic Bikur Holim Hebrew School. Driven by his motivation to unite all Sephardim, Levy advocated for the amalgamation of the Sephardim of Sephardic Bikur Holim and Ezra Bessaroth. According to the Jewish Transcript of Seattle, Levy helped to set up the initial agreement to have him serve as rabbi of both synagogues in 1938 (Jewish Transcript, Feb. 1938). Such an arrangement never came to fruition and he continued position at the Sephardic Bikur Holim Hebrew School.