Several of Albert Levy’s former students in Seattle still recall the significant impact Levy made on their Jewish education and sense of community. Some of Levy’s former students, both male and female, now in their 80s and 90s, still get together on a weekly basis as members of a group known as Los Ladineros. They study Ladino and reminisce about the old days. Several of the group’s members were kind enough to share their memories of their “professor,” the title they fondly and respectfully bestowed upon Levy. 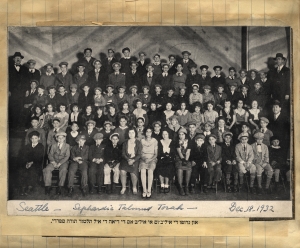 Former student Marcelle Adatto recalled that back in Levy’s time, in the 1930s, the Sephardic community was much closer than today. “Everyone helped everybody,” Adatto recalled. “And Professor Levy always kept saying you have to help others.” The closeness of the community and the dedication and kindness of Levy led his students to think of him as family. Even the children in the community whom he taught could tell he was intelligent and well-respected. As former student Ralph Adatto recounted: “I always thought he was kind of special as far as a teacher or a leader is concerned…he was different than the other men.” As a kind, intelligent gentlemen, Levy earned his title of Professor. “He was so eloquent [among other things]. That was why we always called him Professor,” explained Marcelle Adatto. Isaac Azose, the hazan emeritus of Congregation Ezra Bessaroth, fondly reminisced: “I loved him as a teacher. I was always very respectful towards him and he treated me beautifully. I learned a lot from him and my son, Yossi, tells me ‘Dad, it shows!’” According to Hazan Azose, Professor Levy taught him everything he knew from Hebrew to ta’amim, the style of emphasis, punctuation and chanting for the Sephardic Hebrew liturgy. Levy even shared with Hazan Azose, in secrecy, that he was his favorite student. 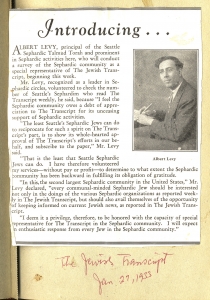 Above all, Levy’s former students expressed the unmatched level of respect they had for their professor. According to Vic Amira, Levy was first and foremost a teacher: “And we respected him as a teacher. With a lot of teachers, students would make fun of them after school, but no one ever said anything like that about Professor Levy. He was always Professor Levy; he was a dignitary. He was someone always respected.” Amira offered additional insight: “I don’t know if you could say that we liked him in a fun way as much as we respected him and knew that he was someone who was important in our community.” Regardless of how fun Amira thought Professor Levy was, he still remembers him as kind, always walking with him after class at the Talmud Torah; Levy would make him sing the well-known Jewish hymn, Ein Keloheinu, all the way back home. In general, Professor Levy’s students echoed each other, remembering their teacher as “a good person and a good man.”