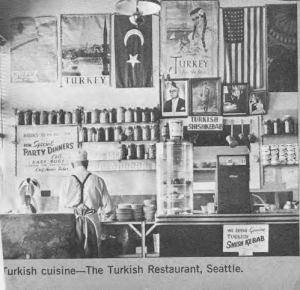 In addition to the realms of journalism and education, Albert Levy’s family also contributed to the perpetuation of Sephardic cuisine in Seattle, most famously through its relationship with the Tacher’s Cozy Corner Restaurant. One of Levy’s daughters, Rachel Levy, married Jack Tacher, whose parents owned the Cozy Corner. Food is a large part of Sephardic culture and when Sephardic Jews came to America, they brought with them the recipes and cooking styles to which they had become accustomed. The Cozy Corner prided itself on preserving traditional Sephardic food, or komida. This strictly kosher, lunchtime Turkish restaurant located in Seattle’s famous Pike Place Market was owned by Morris and Zelda Tacher, two Sephardic Jews from Istanbul. Morris Tacher was born in Istanbul in about 1887 and spent five years as a soldier in the Ottoman army (1908-1913), after which he and his family came to Seattle because his brother was here. 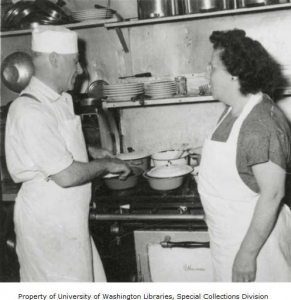 In 1915, Morris opened a kavane, a traditional-style coffeehouse where Sephardic Jews gathered. In 1920, he opened another kavane, called The Turkish Restaurant—the name a sign of the kind of cuisine and ambience to be expected. Eventually, after World War II, Morris and Zelda opened The Cozy Corner in Pike Place Market. It quickly became a gathering place for many in the Sephardic community. “The lunch traffic was made up of many people… [including] the Levy clan,” wrote Mickey Tacher (“Do you remember Tacher’s Cozy Corner Restaurant?”). The Cozy Corner served many Sephardic and Turkish delicacies, such as roast lamb, stuffed grape leaves, baklava, and marzipan that reminded costumers of the culture and cuisine of their families from the old world.