A Sephardic Lighthouse:
Albert Levy & the Sephardic Jewish Journey
1. From Spain to Salonica 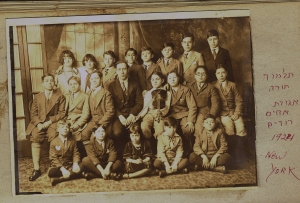 In a series of rhymed poems composed in his native Ladino language and discovered in scrapbooks preserved in a synagogue closet in Seattle, journalist and teacher Albert Levy described the traumatic expulsion of his ancestors from Spain in 1492, the warm welcome they received in the Ottoman Empire, and the extent to which one city in particular—the prominent Aegean port town of Salonica —became a hub of Sephardic Jewish life over the subsequent centuries. Levy indicated that in Salonica, the Sephardim built a community for themselves and flourished. Thirty-five thousand Jews dwelt there in the sixteenth century, and eighty thousand at the turn of the twentieth century. Home to over fifty synagogues, Salonica became a major Jewish center where commerce ceased on Saturday in honor of the Jewish Sabbath. As a hub of Jewish religious, cultural, and economic activity, Levy indicated that Salonica earned the nickname, Madre de Israel (“Mother of Israel”). It became a Jerusalem in the diaspora.

Born in this idealized Jewish metropolis just before the start of the twentieth century, Albert David Levy (1896-1963) became an influential journalist, educator, and community leader who drew inspiration from his family ancestry in Spain and his roots in Salonica. During his time in Salonica, and later in New York and Seattle, Levy relied on his writing and his teaching to promote Jewish education, the Ladino language, communal unity, historical consciousness, and morality and religion. Levy represented a luzero sefaradi—a “Sephardic lighthouse”—for he aimed to guide Sephardic Jewish communities around the world. One of Levy’s New York magazines was aptly entitled El Luzero Sefaradi, a sign and symbol of the role that the newspaper—and its creator—played in the broader Sephardic world. Long lost and never before translated into English, Levy’s writings provide unprecedented insight into the mind of a great Sephardic activist of the twentieth century. His life, highlighted here, serves as a prism through which to view the Sephardic Jewish journey in modern times, from the Mediterranean to America.

2. The Levy Family in Salonica and a Legacy of Notebooks >
Page load link
Go to Top