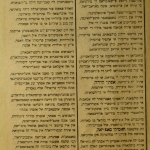 Albert Levy’s piece about Jewish women in the harem

Alberto Levi
[/fusion_builder_column_inner]
Translation: The influence of Jewish women in the harem

In Constantinople, numerous Jews, scholars, rabbis, and famous doctors
enjoyed the esteem of the sovereigns
and treated them as true brothers.

The doctor “Hekim Jacob”, was praised,
he was entrusted with the post of minister;
minister of finances in Turkey,
what a phenomenon, a marvel.

The doctor “Moshe Hamon”, likewise,
was a considerable Jewish influence;
we already talked about him a lot,
as he was the beloved son of Israel.

In time the Sultans, Morad III,
Muhamed III, and Ahmed I;
well honored Jewish women
were considered favorably in the Harem.

They enjoyed influence and veneration,
their words taken into consideration
for their medical knowledge and wisdom
and for their spirit full of sincerity.

The most celebrated of all, and the first,
was the Jewess, Esther Kiera,
she was a widow, beautiful woman,
a proud, sincere, and virtuous Jew.

The Sultana “Haseki Safiye”, he loved her, and she always granted his favors;
her reasoning was well justified,
regarding any subject that was presented.

During the reign of her husband Morad, and his son Muhamed, the daring,
the Sultana Haseki Safiye
had the reins of politics in Turkey,

thus the intervention of Esther the Jew
was wanted each day for her powers,
the republic of Venice exploited
and always demanded her influence.

Esther was connected to her nation,
she fulfilled a grand mission;
protected the poor and suffering,
and consoled the numerous people.

She maintained the hungry and destitute,
she distributed great sums of money;
she was generous in quantity,
and helped the institutions of the community.

The jealousy of the adversaries ruined her,
and her death, they quickly saw;
the fact that follows is true.
And thus the entire story:

one time, Esther Kiera the Jewess,
promised the position of general of the cavalry to one high officer,
but, the next day she retracted it.

She entrusted the position to another,
which quickly increased the jealousy of
the soldiers, furious with anger;
they demanded the head of the virtous one.

Halil Pasha to save himself from that fate,
to avoid the terrible death;
he let her hide in his own dwelling,
with her three sons and her lovely daughter.

But the knights caught them quickly
and you already understand the rest;
furiously, they first killed the woman,
until [and finally] her soul was freed.

After her sons were dismembered,
and their limbs were hung in public;
only one survived, for having decided
to quickly convert and go to the islands.

In 1595, this event occured,
for the Jews it was a sad event
since they loved Esther with affection,
a faithful woman of the nation.

The instigating and criminal soldiers,
were punished by the queen afterwards;
the Sultana had profound regret
for Esther went to the world!

After Esther, another generous women
won great influence;
in the time when Sultan Ahmed lived
and she was known in all of Turkey.

Young still, she became a widow,
Rabbi Solomon Ashkanazi was deceased;
the Sultan esteemed his widow,
and she won much influence.

The reason for the sovereign’s affection
was known by every Ottoman;
the Sultan had come down with sickness,
and no Turkish medic had found the cure.

He had the most terrible small pox,
his healing was incredible
nonetheless, the widow had healed him,
and thus from death he was saved.

This woman gave much for her nation,
she was the object of admiration;
since during her life she gave in quantity
to Jewish institutions and for charity.