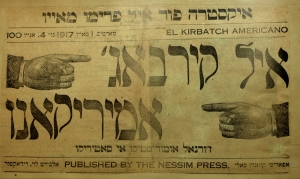 Albert Levy numbered among the most important Ladino-speaking activists who created newspapers in New York to help their fellow immigrants adjust to life in the United States and to strengthen the Sephardic community. Levy became involved with various Ladino publications: a humorous but short-lived journal, El Kirbatch Amerikano (“The American Whip”); a socialist periodical, El Proletario (“The Proletariat”); and El Luzero Sefaradi (“The Sephardic Beacon”), a monthly review of science, art, and literature intended to enlighten the Sephardic masses—regardless of political affiliation—and to promote Sephardic pride. He also published an annual Ladino calendar, known as Halila, in conjunction with his most successful publishing enterprise, the newspaper, La Vara. 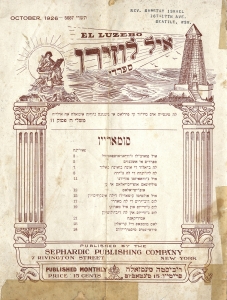 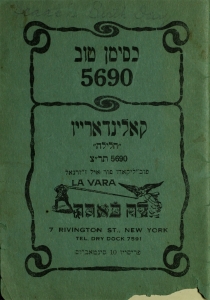 Although more successful than El Kirbatch or El Proletario, El Luzero Sefaradi only lasted for a short time, from September 1926 through August 1927. This widely distributed magazine included standard subscription rates not just for the U.S., but for Mexico, Cuba, and Canada as well. Subscribers lived all throughout the United States—including in Seattle. Levy also used the pages of the magazine to advertise his services as a multilingual translator for correspondence, catalogues, reports, and even tombstone inscriptions. Among the many themes addressed in El Luzero Sefaradi were the relationship between Sephardic Jews and Spain, Jews in the American Revolution, modern Judaism, the struggling relationship between the Sephardim and Ashkenazim, the importance of health and medicine, philosophical reflections, motherhood, and fictional stories. Many of these topics incorporated the themes that Levy promoted in his various publications and teachings such as Jewish and Sephardic historical consciousness and communal unity.