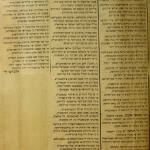 Translation: During the Spanish inquisition the Jewish refugees in Salonica

Salonica, the ancient city of Thessaloniki,
a great city, and rather wealthy;
even before the explusion from Spain
already there were numerous Jews from Germany

There were quite a lot of Italian Jews,
they lived in peace and they were happy;
they had their community, their rabbis
who were intelligent and refined.

When Spain announced the decree,
which was torturous for the Jews,
as a result of the terrible and imprudent exile
Salonica was populated immediately.

The majority of the first wave
in order to flee and escape from all the evil;
they found shelter in the city of Salonica,
which was a quite wealthy Turkish port.

The ancient Greek city was populated
Turkey gave them free entrance
and even though she [Salonica] does not have a healthy atmosphere, the Jews came in order to find rest.

Salonica, the second city of Turkey,
was filled by the Jewish community;
there they found calm and order
more than in the capital, full of movement.

Soon enough, 10 synogagues formed,
and the number increased to 36 groups;
36 groups of small communities
with different customs from their cities.

Salonica soon became a Jewish city,
the Jews forgot the tragedy;
they organized with prudence
for the general work of rebirth.

Rabbi Samuel Usque, a famous poet,
wrote verses in beautiful prose
about Salonica, which bore excellent fruits
for its noble and high goals.

The mother of Israel, he called her,
since a national city similar to Jerusalem
was founded there,
a center of general Jewish activity

Thanks to its immense activity,
the Sephardic community gained influence;
Spanish became universally spoken,
the German Jews had adopted it.

Salonica became a center of kabbalists
since they were erudite Sephardim
also well versed in philosophy,
in the Jewish sciences, and astronomy.

The young son of Don Isaac Abravanel
an intelligent young man, called Samuel
came to Salonica to educate himself
and later he established himself there.

Thus, within only a century
Sephardic Jews played a huge roll;
they were quite numerous
and had made quick progress.

They founded schools, numerous yeshivas,
Salonica became a powerful community;
the city was calm and ideal
for carrying out a national life.

Later, fires and disease,
also catastrophes and calamities,
threatened to crush the community
and even to throw them into an abyss!

The Jews of Salonica were patient,
even though they felt misery and pain,
they continued their work with success
and quickly returned to life.

Once again work was organized,
all of the activities were centralized,
forming a strong community
and unique model throughout all of the East.

Salonica gave rise to influential people,
wise men and rabbis worthy of praise;
Salonica was quite envied
for the dignity and fame she earned.

Of the 35 thousand Jews that she had
the number rose to 80,000.
She was an entirely Jewish city,
unique in all of vast Turkey.

War and destruction came,
Salonica passed under another authority;
during the Balkan War, Greece
occupied Salonica with its army.

Greece took over the city,
enacted order and tranquility,
and the Jews started another life
that was not at all preferred.

A life of suffering and bitterness
full of pain and torture;
commerce was decreasing and everything was changing, and Greece imposed taxes.

The great and formidable fire broke out
in 1917, the memorable fire,
the city was ruined
from the flames, she was erased.

The community experienced great crisis,
her institutions had turned to ashes;
in few hours everything was devastated
and the entire Jewish people were alarmed!

Thanks to urgent help sent,
the Jews were somewhat assisted;
the community, far from losing control,
filled a valiant and worthy role!

Despite the noticeable decline,
the disgrace that quickly came,
the community did not lose patience,
it continued its work with perseverance.

Today Salonica is a grand city,
even though life is sad and unhappy;
the Jews are well organized
and united in solidarity.

Let us take the example of this community,
which despite its numerous sufferings,
today is strong and renowned
for its demonstrated Jewish activity.

Here in America, we have much liberty,
rest, calm, and tranquility
even though we are so disorganized
and for the most part divided.

Let’s lend our hands, let’s take action
for Judaism and the nation;
let’s form the community today
for the prestige of the colony!
Albert Levy