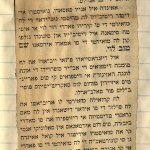 Translation of the obituary of Albert Levy’s brother, found in one of Levy’s scrapbooks. Translated by Ashley Bobman.

It is with a profound sadness that we report the news from Salonica of the death of the deceased Shem Tov David Levy, brother of our editor Albert Levy, who died at the unfortunate and premature age of 18 years.

The unfortunate was taken to the grave after having suffered from a long sickness and after his parents made all the possible sacrifices to save him.

The cruel death arrived at the height of his youth, leaving the biggest sadness and despair to his widowed mother, two brothers in Salonica, as well as our editor who has still not comforted himself from the death of his father and that now has come to receive a second sad and bitter news.

We have a duty to address our sincerest condolences to the afflicted family for this cruel loss and we pray that the soul of the deceased young rest in peace.

May his soul be bound up in the bond of life.