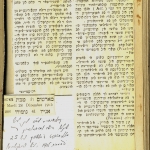 Summary of Levy’s speech about education

A translated summary of a speech given by Albert Levy about teachers’ place in education. Translation by Ashley Bobman.

Before a numerous audience, our collaborator Mr. Albert David Levy spoke on Shabbat in the headquarters of the association of teachers about the teacher’s role in education.


Mr. Levy developed quite well the subject in question, from two points of view: psycho-pedagogical. With a well-based argument. He critiqued the fundamental pedagogical ideas of Defenelon about the spirit of the women.

With real/living examples and historical facts, he pointed to the intelligence of the women, the depth of the intelligence and elevation of her spirit; the orator took a glance at all the civilized countries and he presented equally women who make humanity glorious.

Mr. Albert Levy speaks of the modern pedagogical history of six principle elements and demonstrates why an enormous difference exists between them and those predicted by Fenelon.

With method and order, the orator speaks of the strict needs of the education of girls and in which consists modern instruction.

Each material studied, analyzed, and criticized following the strict laws of modern pedagogy, made for the increasing interest of the listeners.

The conclusion of the conference was not less interesting. The speaker brought up the false and damaging role of today’s educator, he spoke of the evolution that admiringly operated among the teachers of today in that which conerns their role as educators and their intellectual formation, and summarized in few substantial words the mission that they are called to fill for the healthy formation of the future generations.

The speaker was heartily applauded.

Therefore it is wished that similar pedagogical and scientific conferences are given frequently in the teacher’s association.