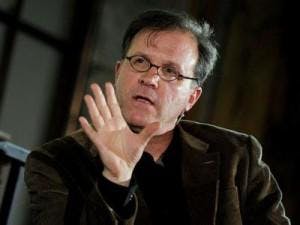 Hebrew is lashon ha’kodesh and lashon b’nei adam, a divine language, the way for man to communicate with G-d, and, as such, an eternal language defying the passing of time; and a human language, earthly, clumsy, vulgar, imperfect, and prone to decay. These opposing sides make Hebrew unique, that is, the Jewish language par excellence and the route through which Jews negotiate the passage from life to death.

An essayist, cultural critic, and translator, Professor Stavans is Lewis-Sebring Professor in Latin American and Latino Culture and Five College-Fortieth Anniversary Professor at Amherst College. A native of Mexico, he received his Doctorate in Latin American Literature from Columbia University.

Prof. Stavans’ books include The Hispanic Condition (1995), On Borrowed Words (2001), Spanglish (2003), Love and Language (2007), and Gabriel García Márquez: The Early Years (2010). His book Resurrecting Hebrew, published in Schocken’s Jewish Encounters series in 2008, is a personal memoir alongside a history of Eliezer Ben-Yehuda and the remarkable revival of Hebrew in the early 20th century. Recently, Stavans translated Pablo Neruda’s All the Odes (Farrar, Straus, and Giroux, 2013), and authored Return to Centro Histórico: A Mexican Jew Looks for His Roots (Rutgers, 2012), the graphic novel El Iluminado (Basic, 2012, with Steve Sheinkin), and the children’s book Golemito (New South).

Click here to find out out Stroum Lectures Night 1–Dr. Dara Horn on “Living in Hebrew.”

Learn more about events at the Hebrew and the Humanities Symposium on the Symposium webpage.