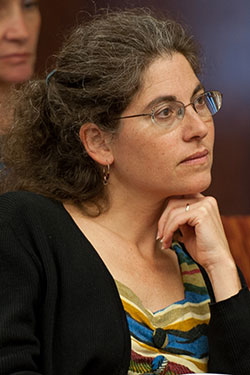 Prof. Gabriella Safran, Eva Chernov Lokey Chair of Jewish Studies, has written on Russian, Polish, Yiddish, and French literatures and cultures.  Her most recent book,Wandering Soul:  The Dybbuk’s Creator, S. An-sky (Harvard, 2010), is a biography of an early-twentieth-century Russian-Yiddish writer who was also an ethnographer, a revolutionary, and a wartime relief worker.

Safran teaches and writes on Russian literature, Yiddish literature, folklore, and folkloristics.  She is now working on two monograph projects: one on the collection and curating of the Russian peasant voice, by writers, lexicographers, ethnographers, and musicologists, from the 1830s to the 1910s, and the other on the popularization of notions of Jewish voice, by writers, speakers, and performers, in the Russian space and in the United States, from the 1870s through the 1920s.

Organized by: Slavic Languages and Literatures

Department of Slavic Languages and Literatures