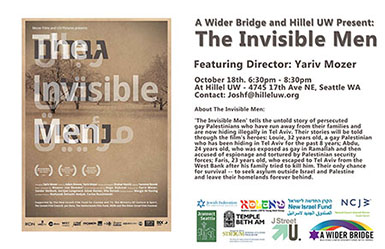 The Invisible Men is an award-winning 2012 documentary that tells the story of gay Palestinian men who flee the West Bank.  In fear of their lives, they enter Israel illegally and hide out in Tel Aviv. These men are the heroes of the film. The movie describes the challenges and hardships they face, the painful choices that confront them, and the courageous Israelis who work to help them. It also shines some light on some policies of the Israeli government that play an important part in the difficulties faced by the men portrayed in the film.