Join Hillel UW and JConnect Seattle for a screening of the documentary “Two Sided Story” by Emmy Award-winning director Tor Ben Mayor. This event is co-sponsored by the Stroum Center for Jewish Studies at the University of Washington.

The film follows 27 Israelis and Palestinians as they participate in an extraordinary dialogue workshop organized by the Parents Circle-Families Forum (PCFF) – bereaved Palestinian and Israelis for Peace and Reconciliation. The project’s goal is to acknowledge the narrative of the other. Among them include Orthodox Jews and religious Muslims, settlers, ex-soldiers in the Israeli army, ex-security prisoners, citizens who live close to the Gaza border, Kibbutz members, second-generation Holocaust survivors, nonviolent activists and more. Each holds a historical truth; each and every one carries his own emotional load. Ben Mayor documents all the meetings and escorts the participants back home when they return to their families and face the complicated reality.

Following the screening of “Two Sided Story,” there will be refreshments and a Q&A session led by Shiri Ourian, the Executive Director of American Friends of the Parents Circle – Families Forum. Parents Circle is a grassroots organization made up of more than 600 bereaved Palestinians and Israelis, all of whom have lost an immediate family member to the conflict. The PCFF promotes reconciliation as an alternative to hatred and revenge. Its long term vision is to create a framework for a reconciliation process to be an integral part of any future peace agreements. 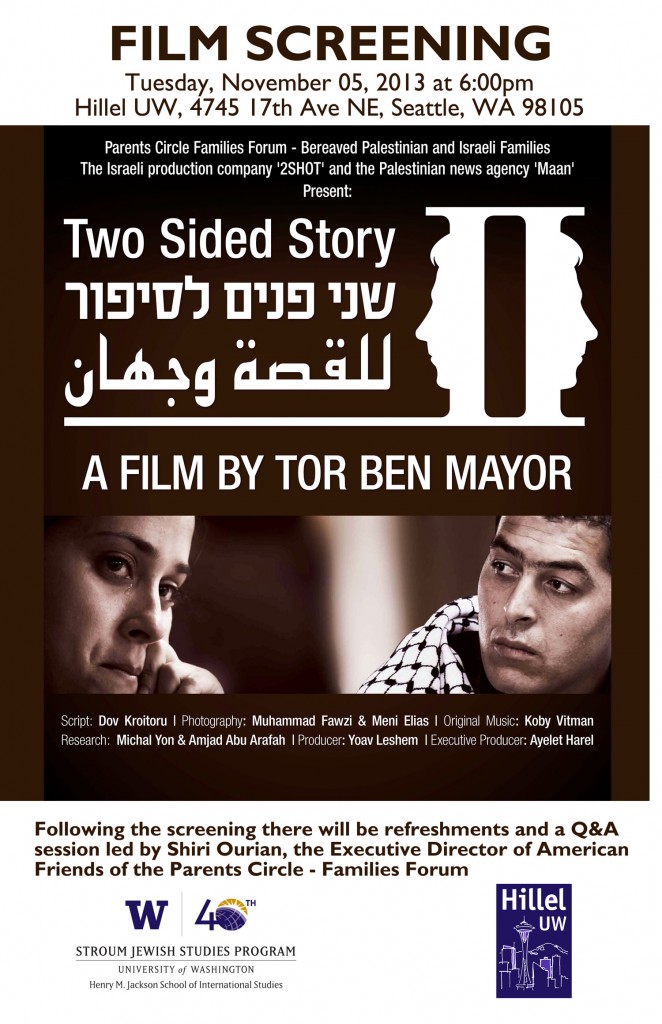