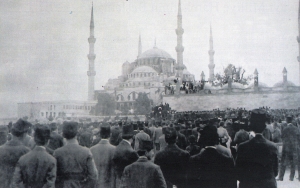 About the Course:
This graduate seminar explores the profound ruptures impacting Eastern Europe and the Middle East during the nineteenth and twentieth centuries as a result of the collapse of the Ottoman and Russian empires, the triumph of nation-states, and the rise of new colonial regimes. We will explore these broader transformations through the prism of major cities within these imperial and post-imperial spaces. As a portal into the broader debates about empire, nationalism, and urban dynamics, we will highlight the experiences of a set of populations that traversed conventional political and cultural boundaries: Jews. Through a comparative and transnational lens, we will examine recent key historiographical developments regarding Jewish life in the cities of the Ottoman and Russian empires and their successor regimes. We will focus on a number of major urban centers as vehicles through which to analyze the diverse ways in which Jews and their neighbors—both majority as well as other minority populations—responded to the transitions provoked by the end of the Ottoman and Russian empires during World War I. Taking cues from recent scholarship and critical theory regarding the “imperial turn” and the “spatial turn,” we will ask how historians can write panoramic histories that simultaneously highlight intimate narratives of the local and particular.