Skip to content
Heroes, Heretics and Radicals: The Beginnings of Judaism and ChristianityStroum Center for Jewish Studies2017-09-04T22:43:21-07:00

Heroes, Heretics and Radicals: The Beginnings of Judaism and Christianity 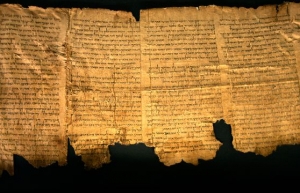 This seminar investigates the heroes, heretics, and radical pioneers of movements around the beginning of the Common Era (150 BCE–150 CE). Jesus’ and Paul’s names are well-known today, but there were many other men and women who revolutionized the religious landscape in antiquity, some of whom are remembered as heroes, some as heretics, while some are almost entirely forgotten.  Students are invited to investigate the ancient evidence for these heroes, heretics, and radicals in the Holy Land and beyond. While we learn about the life of people in Palestine at the beginning of the Common Era, we will employ the tools that scholars use to create history. Over the course of the semester, students are empowered to participate in the making of history by analyzing primary sources, engaging critically with secondary sources, and authoring their own historical narrative.