10. A Ladino Novel in Seattle 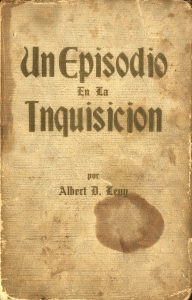 While in Seattle, Levy wrote Un Episodio en la Inquisicion (“An Episode in the Inquisition”), one of the only novels published in Ladino in the United States. It was printed on the Seattle printing press of Joseph Souriano in 1934. Notably, Levy chose to write the novel in a more Castilianized version of Ladino, in Latin (rather than Hebrew) letters, as he likely surmised it would resonate more with how Spanish was spoken in Spain and in the Americas. Considering Levy published this historical novel during his time at the Seattle Talmud Torah, he may have had his students in mind as an intended audience. 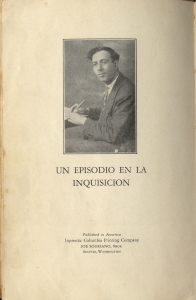 The protagonist of the novel is a strong Jewish woman, Rachel; she is the epitome of the committed Jewish lady – a widow with a baby who will not be swayed away from her beliefs. The woman’s family is arrested by Inquisition officials, one of whom falls in love with her. This officer wants to marry her, insisting she convert to Catholicism. As a strong moral woman she holds to her beliefs and refuses, angering the officer. Eventually, by the grace of God she escapes to somewhere safe. Set during the Spanish Inquisition, the novel portrays the characters in a manner that seems political. 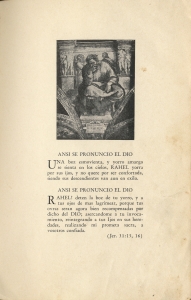 This story appears to serve two main overarching purposes. Levy informs his readers of the forces that drove the Inquisition and simultaneously imparts an important piece of wisdom: there will always be those who try and convince you to abandon your culture, traditions, or religion, but it is important to stay true to yourself and your beliefs.

Levy often emphasized the importance of maintaining one’s morals, values, culture, and traditions. In the new American context in which Sephardic Jews were now living and with increasing pressures for them to assimilate, Levy’s novel about Rachel and her refusal to abandon her beliefs was intended to inspire America’s Sephardic Jews to preserve their identity in the face of new obstacles.