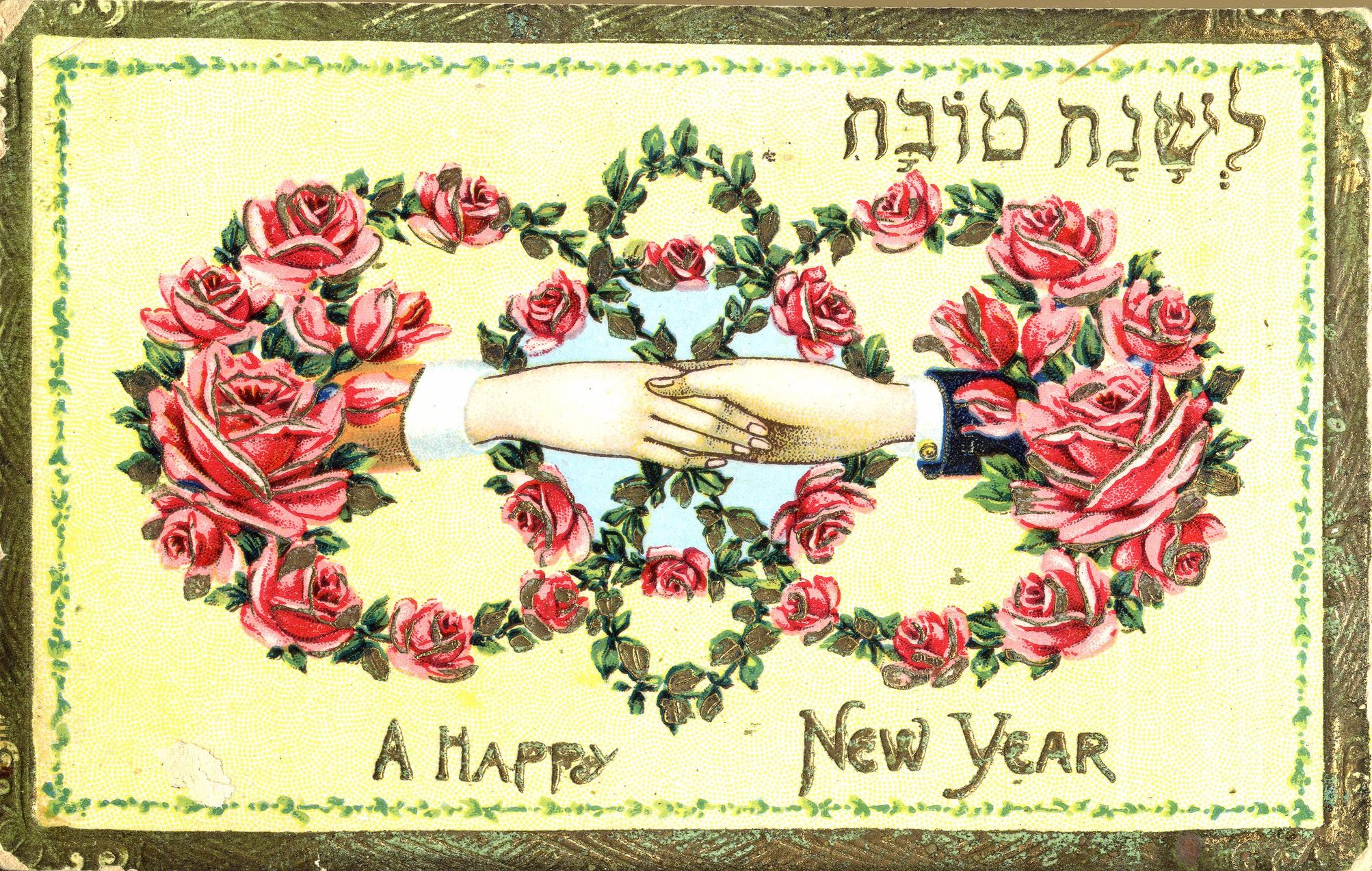 A Turkish-Jewish Printer Arrives in Seattle 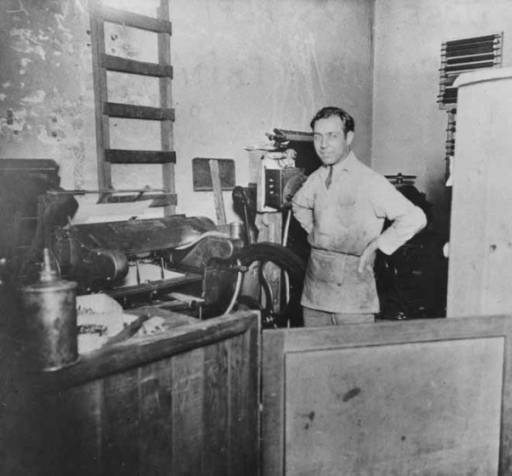 In the spring of 1920, Joseph (Giuseppe) Albert Souriano smuggled himself as a stowaway to Seattle from Istanbul in order to avoid conscription in the Turkish army. He already knew at least six languages: he grew up in a Ladino-speaking home, studied Hebrew at synagogue, and learned Turkish in the street. In Istanbul, at the Alliance Israélite Universelle school, he learned French. Later, he attended the German language and trade school also located in his hometown, the Hilfsverein der deutschen Juden. In this school he successfully learned the printing business, and his fluency in languages later qualified him to become an apprentice in a German-owned printing company in Seattle. Eventually, Souriano opened his own business, the Columbia Printing Company located in downtown Seattle. Souriano’s education and linguistic skills allowed him to run a successful printing press that served the needs of the Sephardic community far and wide.

Before every Rosh Hashana (the Jewish New Year), Souriano eagerly waited to open his mailbox to find the beautiful holiday cards sent from his friends and family back home in Istanbul. The greetings written and printed on these postcards give us a unique glimpse into the multicultural and multi-linguistic world of the Sephardim. To the Souriano family, the message was clear in every language: in the old country their families were thinking of them and hoping that this year would finally be a good year: Yeni Yilinizi ve Bayraminizi Kutlar (Turkish), Shana Tova (Hebrew), Bonne Année (French), Anyada Buena (Ladino or Judeo-Spanish); they even evoked languages traditionally less familiar to Sephardic Jews, including Gluckliches Neujahr (German) and Happy New Year (English).

You can view the entire Souriano postcard collection at this link. As one example, here are the front and back of one card the Sourianos received from abroad. The front illustration is accompanied by the Hebrew and English for “May you be inscribed for a Good Year,” while the back contains Ladino and Hebrew. We thank Marlene Souriano-Vinikoor for sharing these materials with the Sephardic Studies Digital Library & Museum. 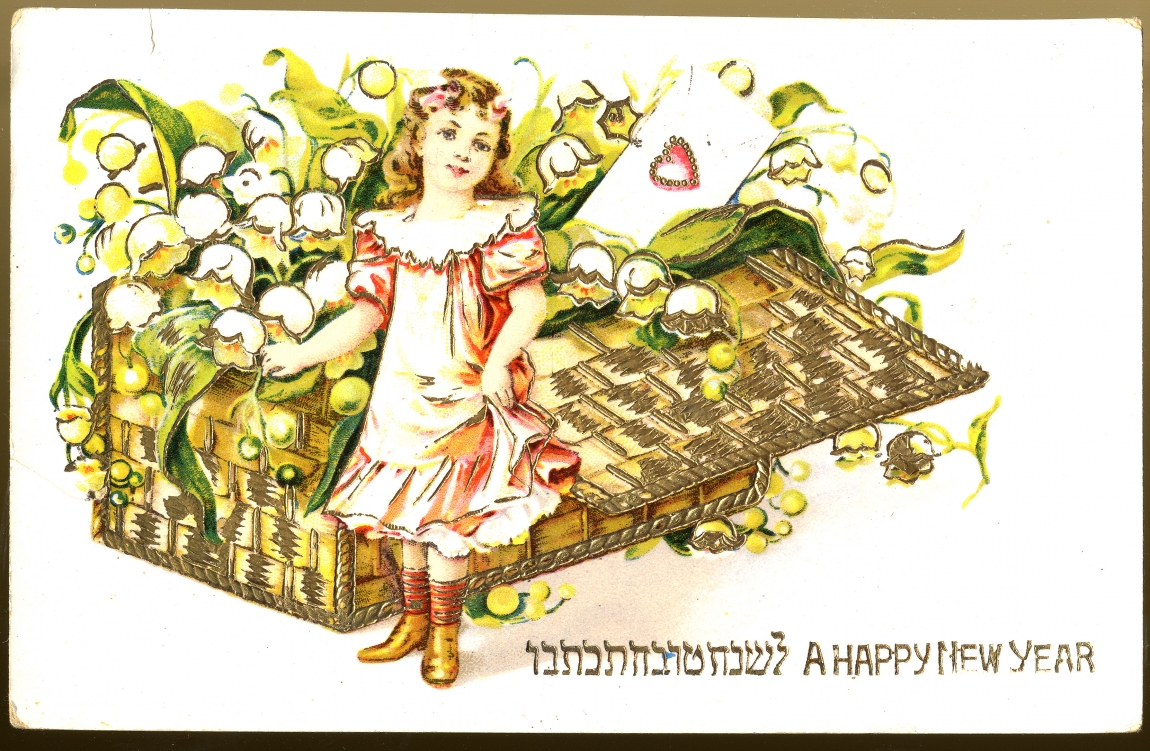 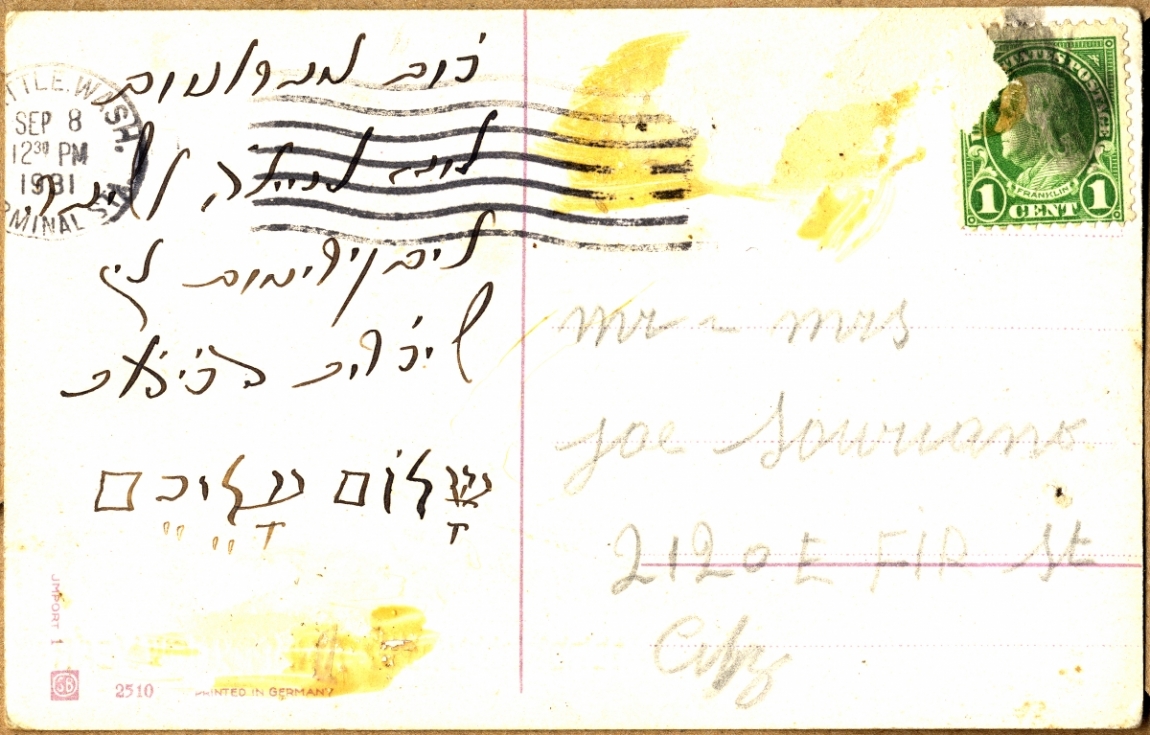 “Vos ogramos una anyada alegre eskritos en livros de vidas, Shalom alehem.” [We wish you a happy [new] year, may you be inscribed in the books of life. Peace unto you.] Image courtesy of Marlene Souriano Vinikoor and the Sephardic Studies Digital Library.

In Seattle, Joseph Souriano met another student of the Alliance Israélite Universelle, Rebecca Varon of Izmir. At 12 years old, Rebecca and her brother Raphael arrived in the United States together with their widowed mother Regina (née Israel) Varon and their uncle Rabbi Sabetai Israel who served as the rabbi for Sephardic congregations in Haiti, New York and Seattle. Rebecca’s father Isaac Varon served in the Ottoman military during the Great War. He was presumed to have died in battle although his body was never found. Consequently, her mother Regina Varon decided to come to the United States after waiting nearly ten years for her husband to return (after which she was no longer considered an aguna [contractually bound by her husband]). In order to avoid any unnecessary sadness, all of the photos of Isaac were destroyed.

Joseph and Rebecca married in Seattle in 1928. Their first child Carmen was born 15 years later, followed by the “buchukes” (twins) Charlene and Marlene and then their daughter Linda. “My father spoke about seven languages, which no doubt helped secure a fair amount of printing business for him in Seattle,” says his daughter Marlene Souriano-Vinikoor. “He also had the Hebrew typeset, which allowed him to accommodate and acquire a large amount of work in the Jewish community.”

Joseph Souriano became Seattle’s go-to Ladino printer. As a member of the third Sephardic synagogue in Seattle, the Ahavath Ahim, Souriano likely printed some of this congregation’s publications. Not only was he an active cast member in many of the Ladino theater performances in Seattle, including a leading role in Leon Behar’s “Love and Religion” performed in 1927; he also printed flyers and programs for these theater groups. In 1928, he printed the “Constitution and By-Laws” for one of Seattle’s Sephardic mutual aid societies known as “Shalom Alehem.” This little pamphlet was written in Ladino and printed in Hebrew script. 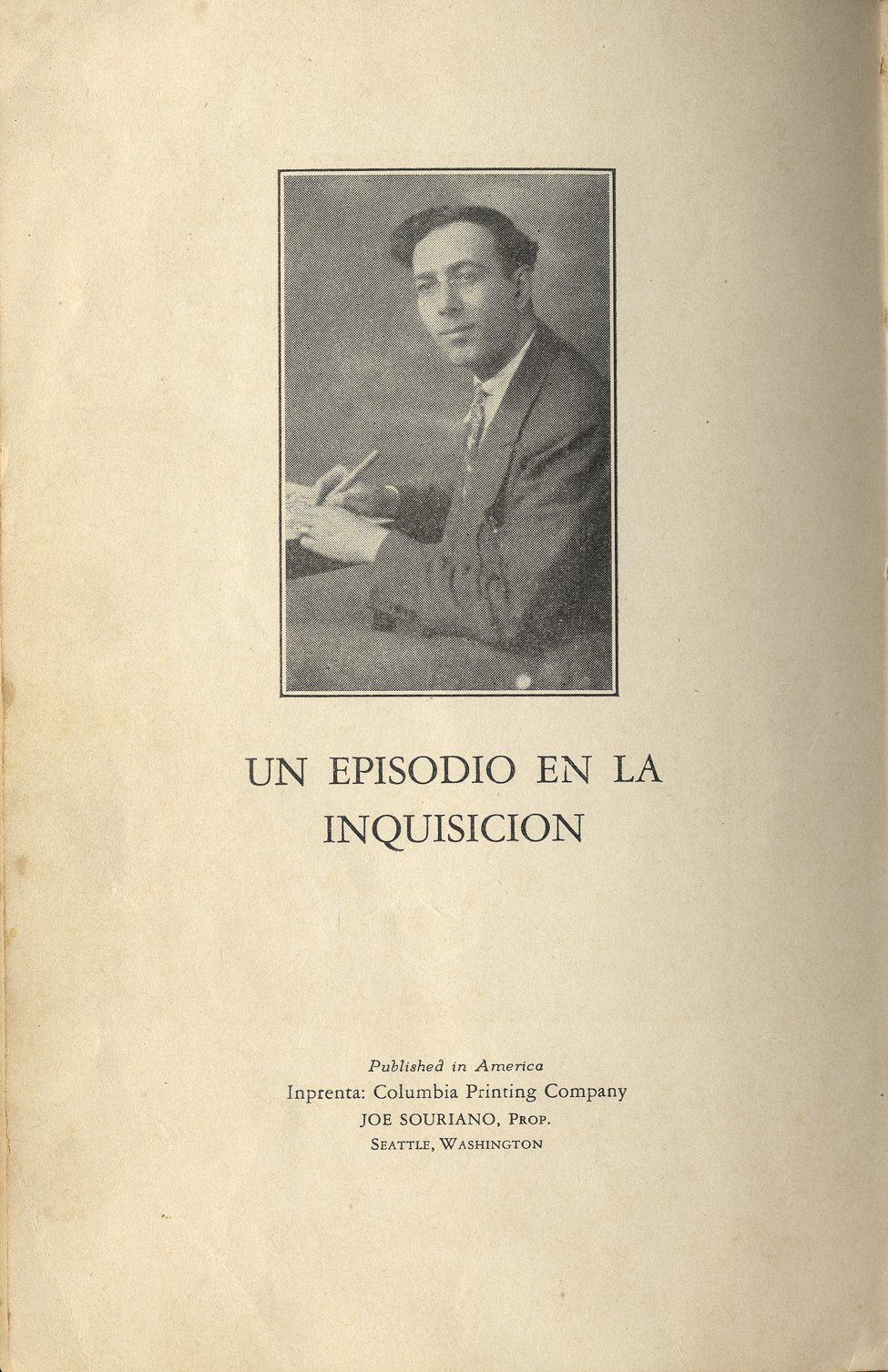 Albert Levy’s novel, An Episode of the Inquisition, is the only Ladino novel known to have been published in Seattle. Image courtesy of the Sephardic Studies Digital Library.

In 1934, Souriano printed the only known Ladino book published in Seattle, An Episode in the Inquisition by Albert Levy, a novel, published in the Latin rather than Hebrew alphabet, that found its way to many homes across the city. Like many “Turkinos” in Seattle, he joined the Sephardic Bikur Holim synagogue, where he served as the congregation’s president from 1937 to 1938.

Souriano’s Columbia Printing Company also produced items related to Rosh Hashana. The Sephardic Studies Digital Library includes the “Congregation Ezra Bessaroth Bulletin” from September 1943. This High Holiday edition features articles written by Rabbi Dr. Isidore Kahan and the Reverend David J. Behar. From the front cover we see that in 1943 the sermons were still delivered in Ladino, and included subjects such as El Mensaje del Shofar (The message of the Shofar) and Santuarios Chicos (Little sanctuaries, a reference to synagogues). The Bulletin makes clear that Congregation Ezra Bessaroth also focused attention on their sons fighting in the Second World War throughout the entire Hebrew month of Tishri. We see (on p.2) an appeal to the readers to attend the early morning selihot (penitential) service: “As this is war-time, please come and pray with us for Victory, and the safe return of our boys.”

This Bulletin is also of particular interest for me because it refers to my tarapapu, my great-grandfather, Morris (Moshe) D. Alhadeff, who was thanked for his “honorary services to the Congregation on the high holidays, and throughout the year,” and my papu (grandfather), David M. Alhadeff, in the list of names (on the back cover, p.8) entitled “E.B. Congregation Honor Roll”: “We present with pride the names of the men from our Congregation family who are serving in the armed forces of the United States.”

We look forward to sharing future research on the publications printed by Joseph Souriano. Graduate student Emily Thompson, a Jewish Studies Graduate Fellow (2015-2016), is preparing a full translation of Albert Levy’s novel, Un Episodio en la Inquisicion. Molly FitzMorris, a graduate student in Linguistics, helped to translate some of the Souriano materials in Ladino written in Latin script. Dr. Izo Abram, a researcher for our Sephardic Studies program based in Paris, kindly translated the soletreo inscription written on the back of the Souriano family’s Rosh Hashana cards.

Ke seash eskritos en livros de vidas largas — May you be inscribed in the book(s) of life. Anyada alegre!

Want to see more articles like this?  Sign up for our newsletter!
⇒ Learn more about the Stroum Center for Jewish Studies at the University of Washington, our Sephardic Studies Program, or our Israel Studies Program.
Note: The opinions expressed by faculty and students in our publications reflect the views of the individual writer only and not those of the Stroum Center for Jewish Studies.
By Ty Alhadeff|2019-09-24T22:22:18-07:00September 6th, 2015|Categories: Digital Sephardic Treasures, Global Judaism, Sephardic Studies|Tags: Ladino, Religion & Ritual, Rhodes, Seattle, Sephardic, Sephardic Studies Digital Library & Museum, Turkey, Ty Alhadeff|6 Comments