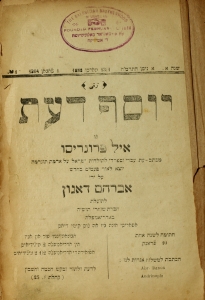 Levy used the pages of his publications to promote an awareness of Jewish and Sephardic history among his readers. He believed that if Sephardim felt proud of their past they would be inspired to work hard and continue to grow and persevere. Levy likely took inspiration from his own library, which included Abraham Danon’s well-known history of the Jews in the Ottoman Empire, written in Ladino and Hebrew in 1888 and published as part of his magazine, El Progreso / Yosef Da’at. 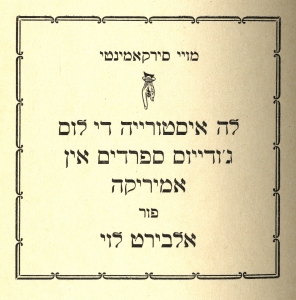 While’s Danon’s publication largely reached the Sephardic Jewish elite alone, Levy wanted to make history more accessible to his readers and more enjoyable to read. To accomplish this goal, he wrote extensively about historical topics in the form of poems (more than a hundred in total!). To aid in the understanding of the Sephardim’s origin, their accomplishments, and all the hardships they overcame, Levy began with the challenges that Jews faced upon expulsion from Spain. At that time, as Levy described in one of his poems, many Jews arrived in the Ottoman Empire. Here the Sephardic community came to grow and prosper. Read Levy’s poem about resettlement in the Ottoman Empire. In another poem, Levy indicated that although Jews initially flourished in the Ottoman Empire, they later experienced hardship that forced some of them to leave for America. Read Albert Levy’s poem about difficulties for Sephardim in the Ottoman Empire. 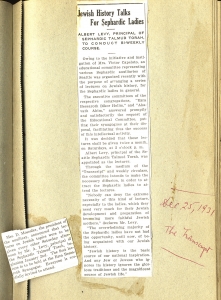 According to a report in New York’s Jewish Telegraphi Agency (November 13, 1933), Levy also planned to write the first history of the Sephardic Jews in America. The Jewish Telegraphic Agency noted: “A leader of the Sephardic group here [in Seattle], Albert Levy, principal of the Sephardic Talmud Torah, will be the author of the first history of the Sephardic Jews in America. Mr. Levy has just returned from visits to Los Angeles and Portland to gather material for the book which is to include a survey of present Sephardic communities and a history of Sephardic life in the United States.” Unfortunately, it is unclear if this history project ever came to fruition. Levy did, however, initiate a series of lectures on Jewish history for “Sephardic ladies,” as announced in Seattle’s Jewish Transcript. The education of women emerged as a major priority for him.