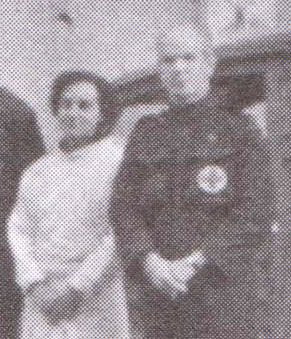 Celia Seborer (Celia Greenspan in Spain), a lab technician and then a nurse, was the first woman to volunteer for service in Spain. She joined her husband, the journalist George Marion (Marion, or Maurie, Greenspan), in Madrid shortly after he arrived in early August 1936. The War was barely two weeks old when she arrived.

She worked first with the Canadian Dr. Norman Bethune, a pioneer in blood transfusions, and then as a nurse in Murcia, in the south, where she received the first of the wounded from the deadly battle at Jarama in February 1937.

“None of the men whom I interviewed had any military training before they went to Spain. I would generally ask them why they thought that their best contribution to the cause would be as a soldier. Desperate times, they might say, in one way or another. By contrast, the women — mostly attached to medical units as nurses or lab technicians — knew what they were doing when they arrived. Of the 46 nurses sent by the Medical Bureau to Aid Spanish Democracy (often called the AMB), more than half were Jewish.

When I spoke to Celia in June 1992, she was bound to a wheelchair. It was a fine day. We left her apartment on the Upper West Side of Manhattan, went out for tea and then sat in the park beside the Museum of Natural History.”

How did you come to join the war effort?

Celia. I was in Spain…

Joe. …where you said you had an easier time of it… 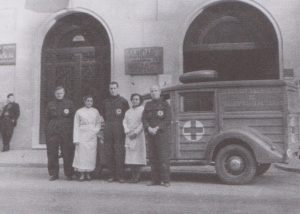 Celia, Norman Bethune, and other medical staff stand next to their ambulance. Spain, 1936.

Celia. …in Madrid. Bethune was given a beautiful apartment for the blood transfusions business. You know this was a brilliant idea on Bethune’s part to get blood to the front and it happened just at a time when the preservation of blood was new. I was there.

My husband was a journalist, George Marion… He left New York on August first, one of the first people to go to Spain after the war broke out in mid-July. He left New York August first, for the Worker. My feeling was, I was unemployed, in the time of Depression; if he could go, I figured I could go. I’m a laboratory technician, I’m sure there’s work. I didn’t have Spanish. So how to make connections? I heard of Bethune, what he was doing…

Joe. And you were already in Madrid.

Celia. I was in Madrid, long before he was. So I went to him and said I was a laboratory technician, and he said fine, and I did the technical work of setting up the laboratory, sterilizing it, doing that kind of thing. There were two Spanish doctors, speaking with people, getting volunteers, out taking the blood.

As I said, he got this beautiful apartment and I got a room in it. Later we turned it all over to the Spanish People’s Medical Service. I was with George Marion. His name was originally Marion Greenspan; you’ll find that name. He was in Valencia and I went there.

There was nothing for me there, so I went out and joined the International Brigade and I was sent to Murcia where the University building was being turned into a hospital. Then I remained there the best part of a year, with a little laboratory. I became a nurse overnight. I became a Sergeant [laughter]. I know it because they told me. 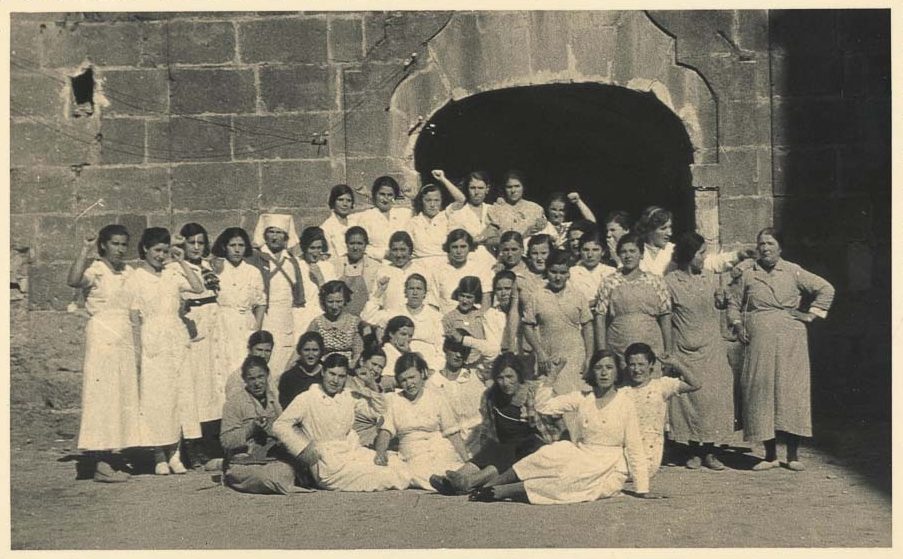 The nursing staff at Huete hospital

Joe. The experience in the south makes it different. Other people were in the north, on the Ebro.

Celia. Women who were nurses had tough conditions. I didn’t. The University building was a fine solid building, but things had to be changed. When the first men came from Jarama, the beds weren’t together. The doctors were still setting up. We didn’t have water in the rooms. Things were hard; we had certain problems.

Joe. I don’t think your life was easy. So how long were you in Spain altogether?

Celia. Over year, about 14 months.

How did you make the decision to travel to Spain in 1934?

Celia would explain how she got to this point in her life, how she became politicized through her medical work in New York, and how she met and married George Marion so that they could travel together to Europe—to Madrid, Paris, Berlin and Moscow, among other places—in 1934.

Joe. When were you married?

Celia. First time? We were married in ’34. We had been living together, which was a shocking thing to do in those days.

Joe. Even on the left it was a shocking thing?

Celia. My parents were wonderful. They put up with a lot, remarkable people. We actually got married because we wanted to travel together and get a passport together with a marriage certificate.

Joe. Yes, always easier. Was your husband writing by then for the Worker?

Celia. That came closer to Spain [meaning Spain in 1936]. When we went to Spain that first trip he left me in Madrid and went to Asturias for the strike of the miners. 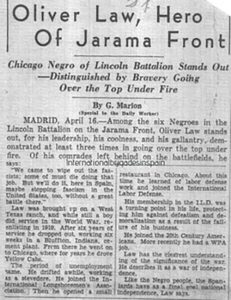 Joe. So you went to Spain before the Civil War!

Celia. That was the first time. I’m sure he wrote about and I’m sure it went to the Worker, even though we didn’t join the Party until ’35, the summer of ’35.

Joe. If we could just point to a few major steps. Most of the things that happen in a person’s life happen bit by bit and from many sources, but still a decision to join the Communist Party isn’t a minor decision; similarly, a decision to go to Spain isn’t minor. Was it friends, did the groups you travelled in influence you?

Celia. The whole spirit of the time [entered that decision] — strikes, demonstrations for unemployment insurance, social security, everything had its impact and even — I was on the job — a laboratory job with the Life Extension Institute, a big department where they received samples of blood and urine, with lab technicians working, my first work experience in a big place.

One of the workers was a girl from an Italian background. We were friendly, and I remember once, by looking out the window at an angle, you could see Fifth Avenue. We were on 43rd Street, and it was May Day and the May Day parade was passing and this Italian girl and I were very very interested, hepped up, and this Italian girl said to me, “Don’t show yourself so,” and we were friends, and actually I got fired from that job.

They began picking on Rhoda [the Italian friend]. The secretary was Jewish; the director was a Seventh Day Adventist, and the head woman, the head of the laboratories, was a Catholic, and I can’t remember why they were picking on her and somehow or another, I spoke up. I objected to her treatment, and the next thing I knew I was asked to leave (chuckle), but I wasn’t sorry. I had been there long enough. We had been saving money. Maurie had a good job for Agence Havas at that time and come the fall, we decided to go to Europe.

“They shall not pass!” Banner in Madrid, 1936. “Fascism wants to take over Madrid. Madrid will be the end of fascism!” Via Wikimedia Commons.

Joe. A trip to Europe in 1934 is almost as stunning as a trip to Spain in 1936. Did you think of yourselves as political travelers or young people out to see the world? Can you say why Spain?

Celia. For one thing, we had been to Mexico earlier, in 1932; it was warm, beautiful and very cheap and somehow we decided that Spain would also be warm, beautiful and very cheap; it was none of those. Madrid was cold in the winter, much more expensive than we had thought; but Maurie was a very economical traveler; he had a suitcase with a little primus [stove], a couple of pots, a couple of dishes, knives; we had rented a room and we cooked in the room our oat meal and vegetables and once in a while we’d go to a cheap restaurant. You’d travel third class.

Joe. That means that when you went to Spain [in 1936], unlike most of the people I’ve talked to, you knew a thing or two about what was happening in Spain.

Celia. The first winter in Madrid we had a room in an apartment owned by two maiden ladies who had a married sister in the building; that sister had two children, a son and a daughter. The son was 17, already a member of the Communist Party and he fed Maurie [pause] material, all along after we went back home still, so that I think that Maurie knew more about the political situation in Spain in late ’35, ’36 than probably anybody.

How much did Hitler factor into your decision to join the conflict?

When asked about the degree to which Hitler’s Jewish policy may have entered into her opposition to fascism, Celia clarifies that she had been to Europe before she went to Spain; indeed, she had been to Berlin early in 1935.

Celia. I knew it too well [what Hitler was doing]; in that first trip to Spain we left there December 1, let’s say, and were in Europe through [early] 1935. We came up through Spain into France to Paris where we had some friends and, (aside) that was ’36. We applied for visas to the Soviet Union and I was going to see Rachiel [her father’s cousin]. That was for me, and I said “laboratory technician,” and Maurie wrote “writer.”

My visa came through promptly and his didn’t come, didn’t come and he decided we’d go to Germany. This was long before the women’s movement; it would have been otherwise [meaning, he made the choice; I followed].

So we went to Germany, to Berlin, and in a few days, we were expecting to go to Moscow. Rachiel was expecting us, and I said, I’m going. I can’t stand this Juden verboten business. So I picked up and left, took the train, went to Warsaw, spent the night there, part of a day, and went on to Moscow and was met at the station by Rachiel. There was no question about being anti-fascist.