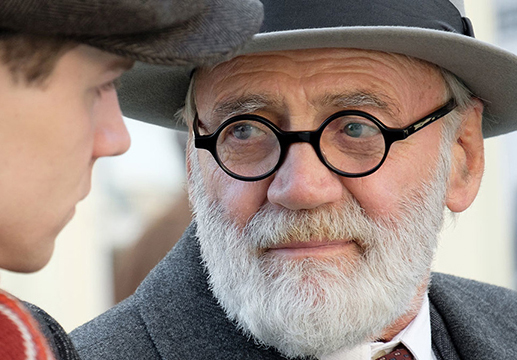 Join the Seattle Jewish Film Festival for the 2018 film “The Tobacconist,” directed by Nikolaus Leytner.

Franz, a 17-year-old boy from rural Austria, comes to Vienna to apprentice in a smoke shop. Although tyranny under the Nazi occupation and hatred towards Jews has worsened oppression and conditions, the tobacco store remains a small sanctuary for newspaper- and cigarette-seekers. He gradually befriends Sigmund Freud, the renowned psychoanalyst and a regular customer. When the shop’s politically outspoken owner is taken away by the Nazis, Franz and Freud stand at the crossroads of survival.

Based on Austrian writer Robert Seethaler′s novel of the same name, “The Tobacconist,” is a tender and gripping coming-of-age story under tragic circumstances through the Freudian lens of dreams, libido, and death that transform a boy to a man. Actor Bruno Ganz (“Wings of Desire”) plays Freud.