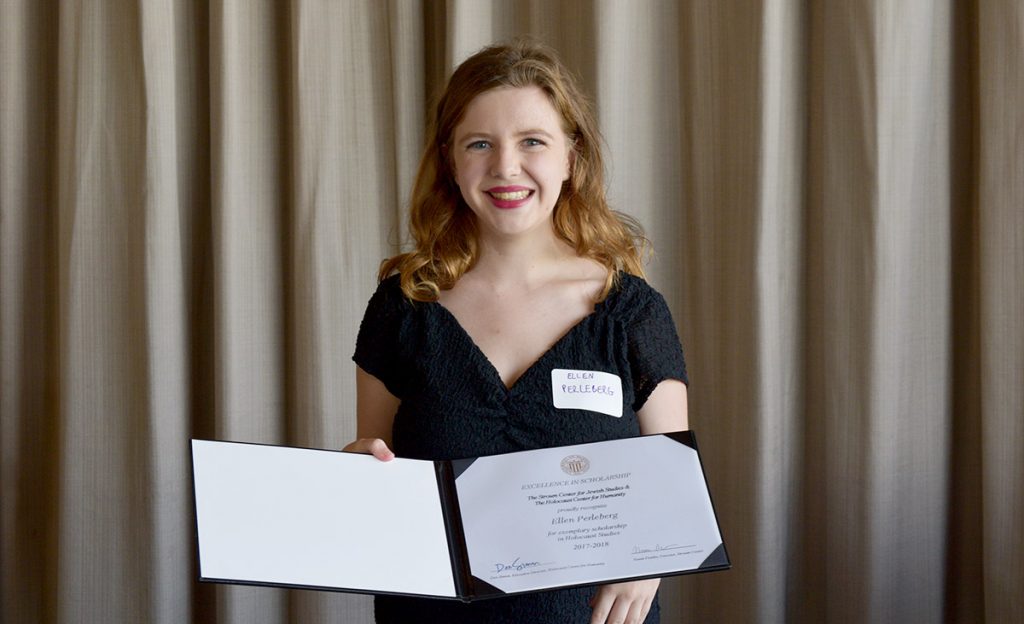 The prize is given annually for an outstanding undergraduate student paper related to Holocaust Studies. The paper must engage critically with the central themes, lessons and ideas of the Holocaust in the time period leading up to, during, or after the Second World War.

Ellen’s paper, “Nature and Nazism,“ was written for Prof. Laurie Marhoefer’s course on Nazi Germany. The paper examines the ways in which “Aryan” German citizens submitted to Nazi control “not through some unique evil,” but through pragmatic and very human responses to the new political conditions around them. Through an analysis of primary and secondary sources, Ellen shows how and why “Aryan” Germans could both be complicit with the Nazi system and continue to think of themselves as normal, even good people.

In one representative section, Perleberg described the gap between the views represented in official Nazi propaganda –upheld by a system of state and self policing– and the views of everyday people, as represented in their humor:

Despite the widespread fear and paranoia, self-policing did not preclude jokes, and many citizens used political humor as a small means to express their discontent and disagreement with official policy. Joking about Hitler or the State carried with it an element of danger, of course, but it was the sort of small risk that encouraged solidarity with one’s neighbors and friends, and became, in its own way, a survival tactic. “An airplane carrying Hitler, Goering, and Goebbels crashes. All three are killed. Who is saved? The German people,” one contemporary joke said.

Several of the jokes [historian] Robert Moeller records speak of “the German people” in a similar manner, indicating an us-against-them mentality among even those who appeared to be supportive of or complicit in the regime.

It was only among “real Nazis” that jokes became subversive. [Author] Ursula Mahlendorf, the summer after she had been selected for Hitler Youth leadership – when her zeal for National Socialism was at its peak – noted that her uncle “stopped telling jokes about Hitler and the party bigwigs at the dinner table.” She reflects that she too had enjoyed these jokes last year, “not knowing that telling jokes about Hitler could have dire consequences.” That she noticed their absence with regret or nostalgia speaks to an element of human, indeed familial, connection that Nazism was never able to monopolize, and which Germans like Mahlendorf’s relatives seem to have prioritized over the immediate feeling of social safety in the Nazi State.

Perleberg goes on to argue that citizens’ collaboration with the Nazi regime was opportunistic as much as it was ideological, as individuals used Nazi policies to benefit themselves –and to harm their enemies– and that, while broadly aware of the persecution of Jews and other minority groups under Nazi rule, most Germans, lacking a structured way to resist, simply resigned themselves to life within the system.

“Aryan” Germans largely “chose to just go on with their jobs, families, and lives,” learning how to exist in a new normal under Nazi control– to the tragic detriment, of course, of the millions of Jews and other outsider groups whose lives were brutally extinguished by the Nazi regime.

Ellen’s paper reminds us that complicity with atrocities doesn’t require citizens to embrace a hateful ideology, or any ideology at all; indeed, sitting by and focusing on “normal life” while atrocities occur “quietly” somewhere else, is all too easy, and all too human.