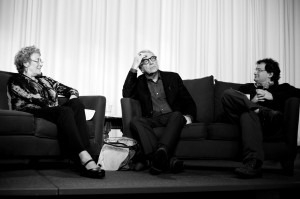 The fourth and final conversation in this year’s Judaism and Social Justice series focused on the question of ending poverty in Seattle. The featured speakers, UW Professor Marcia Meyers and Ken Weinberg of Jewish Family Service, outlined the tensions between theories of fixing poverty and the way that social services address the most critical needs on the ground. As one audience member pointed out, these issues become all the more pressing in an election year during a recession.

While covering a profoundly complicated topic, Meyers and Weinberg ended their chat on a high note. If anything, they said, events like this are a starting point to have necessary conversations about justice that often go unspoken in both the Jewish community and the Seattle community at large.

Various audience members tweeted throughout the event, sharing the best sound bites and statistics from the featured experts. JewDub.org’s official tweeter (@jew_dub) recorded this gem from Ken Weinberg: “Everyone defines the 1% as ‘not me.'” Nicole Neroulias (@BeliefBeat) asked, “How do we go from a bandaid mentality to adopting policies, attitudes that better address poverty root causes?” Jamie Merriman-Cohen (@peaceworkstudio) hit upon one of Weinberg’s best take-away points: “Eliminate the word #charity and substitute the word #justice. Assisting people isn’t charity, it’s an act of social justice.” To access more of the Twitter chatter from these and other audience members, search for #JWTalks.

Reporter Alisa Reznick of The Daily, UW’s newspaper, was on hand snapping pictures and interviewing the speakers. Her full article about the Meyers-Weinberg conversation can be read here. JTNews also published a thoughtful write-up of the event; click here to read more.

The Stroum Jewish Studies Program would like to thank the Association of Jewish Studies and the Legacy Heritage Fund for their generous support of the Judaism & Social Justice series. Thanks also to the many students, faculty, and community members whose attendance at these conversations contributed immensely to their success. Check back with us for all the latest news on our full slate of spring programming!

Want to see more articles like this?  Sign up for our newsletter!
⇒ Learn more about the Stroum Center for Jewish Studies at the University of Washington, our Sephardic Studies Program, or our Israel Studies Program.
Note: The opinions expressed by faculty and students in our publications reflect the views of the individual writer only and not those of the Stroum Center for Jewish Studies.
By Hannah Pressman|2017-09-04T22:42:58-07:00April 4th, 2012|Categories: News|Tags: Pianko, Social Justice|0 Comments