Next Gen Jewish Education at UW

Emma Kibort-Crocker is a Seattle native and a first-year medical student at the UW. Yet for two weeks this past spring, she traded her scrubs and biology textbooks for a seminar table in Thomson Hall. The topic: what’s the status quo of American Jewish education – and if we want to change it, where do we begin?

This debate drove the Stroum Center’s new Jewish Education Fellowship, a bold initiative that asked many questions of its participants and came up with some creative solutions for the future.

Dr. Benjamin M. Jacobs, a leading scholar and practitioner in the field of Jewish education, visited the Stroum Center in April and May to run an intensive two-part workshop series on “American Jewish Education: Inside and Outside the Box.” The early sessions covered the history and theory of modern Jewish education, while the latter sessions shifted to practical application and brainstorming new ideas.

The goal of the workshop series was twofold: to broaden the conception of where educational training can happen, and to recognize the untapped potential for lay leadership—that is, Jewish community members who are not professional educators—to contribute to the field. Prof. Noam Pianko, director of the UW Stroum Center for Jewish Studies, explained his strategic goals thusly: “The Stroum Center has a unique opportunity to make a significant contribution to the Seattle Jewish education ecosystem by training educators and providing thought leadership in a rapidly changing communal environment.” 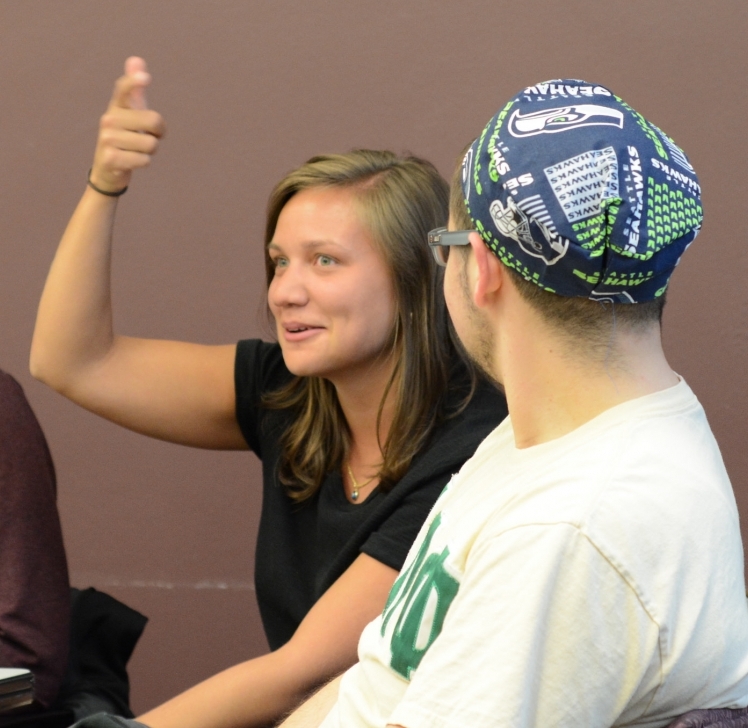 The fellowship experience really resonated with Kibort-Crocker, who said, “By gaining an understanding of the context and history of Jewish education in America, I feel more prepared to think about the future of the Jewish community. I really appreciated the diversity of the group and the multiplicity of viewpoints from the fellows. There are so many exciting and innovative things happening in Jewish education, and I loved exploring what already is out there and cultivating new ideas about how to enrich the field of Jewish learning.”

Why would a major university like the UW get involved in the Jewish education enterprise, when there are manifold communal organizations that already support synagogues and day schools? As Dr. Jacobs explained, “There is a long-standing connection between universities and public schools. Historically, schools of education in major universities have seen it as central to their mission to be fully involved in improving the educational enterprise of the surrounding area. Interestingly, in recent years, the idea that a secular university can be involved in parochial schools has really taken hold. NYU, Stanford, GW, and others now have programs addressing various aspects of Jewish education.”

Nevertheless, it would be practically unprecedented for an academic center at a public university to experiment with offering in-service training and support for educators in the local Jewish community. Said Jacobs, “Quite simply, this is a path-breaking venture in Jewish education.”

Rivy Poupko Kletenik, Head of School at the Seattle Hebrew Academy, is supportive of the idea. She said, “If the Seattle Jewish day schools could partner together with the University of Washington, and create ongoing professional development as well as pre-service professional development, I think that would really be very advantageous for all of our schools in being able attract staff that would be able to really make a difference for our kids.”

A Laboratory of Ideas

The first step in the project, which launched in the early spring of 2015, was creating a cohort of students interested in exploring new approaches to Jewish education. The fifteen students who applied and were selected to participate included upper-level undergraduates, masters and PhD students with a wide range of interests—and to Dr. Jacobs’ surprise, only one of them was in the education school. This turned out to be a positive, as Jacobs noted: “I liked the eclectic makeup of the fellowship class because that allowed different voices in the conversation. It shows there really is broad interest in the community to explore Jewish learning.” 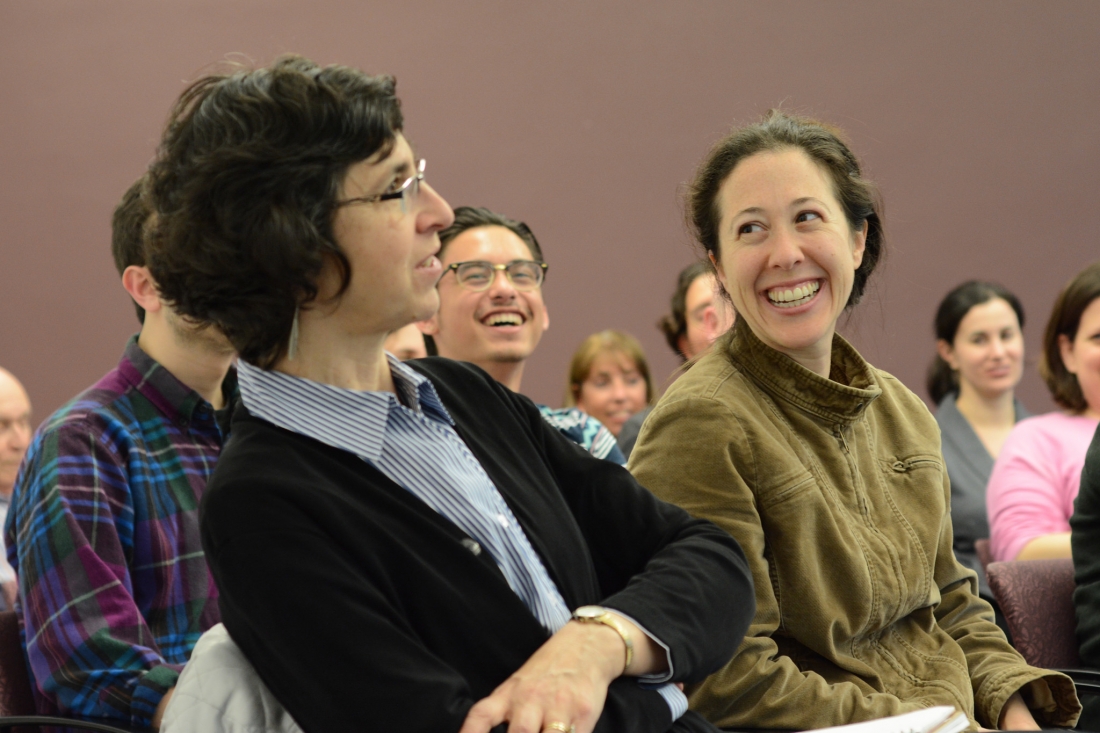 Beth Huppin and Lauren Kurland at one of the Education Lab sessions.

Lauren Kurland, the Stroum Center’s Director of Student Engagement, agreed that the group’s diversity was a plus. “In a region like Seattle, with a growing vibrant Jewish community but no formal program for Jewish educators, the Education Fellowship was like a breath of fresh air—bringing in undergraduate and graduate students from a variety of backgrounds and perspectives to consider together the possibilities for Jewish education in our area. It was a delight watching people from disciplines as diverse as medical school to history to library science put their hearts and brains together to think about new, fresh and relevant Jewish education for the future.”

The enthusiastic interest evidenced by the student participants disproved any notion that millennials (the demographic generation typically defined as being born between the 1980s and the early 2000s) are disengaged from the Jewish community. Jacobs emphasized, “Next Gen Jews, aka millennials, do indeed care about the field of Jewish education. They do indeed care about the community’s future. The UW fellowship experiment showed that there is a critical mass of young people in Seattle who care enough to get together and problem-solve. They can’t be dismissed as unaffiliated. They are proud to be Jewish; they are interested in oral histories and culture. Their ideas may not look like conventional Jewish education, but the interest is there. The energy is there.” 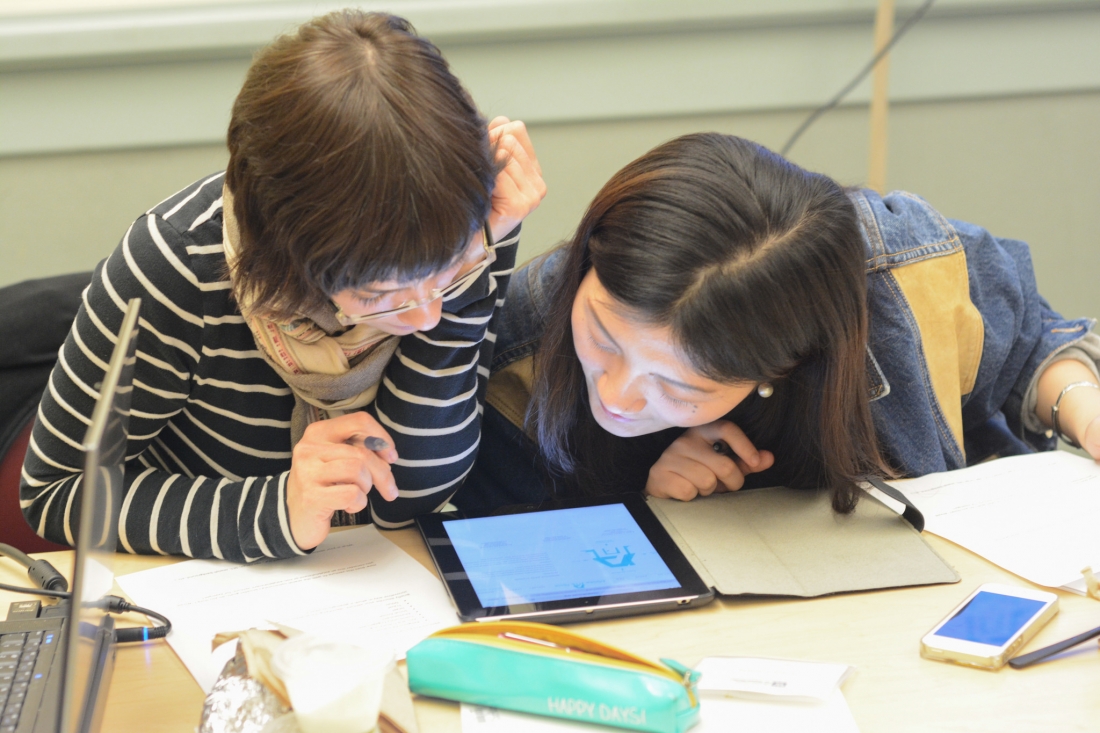 Education Fellows Katja Schatte and Dawn Yang use a tablet to view a Jewish ritual text.

Education Fellow Emily Thompson, who will also be part of the 2015-16 Jewish Studies Graduate Fellowship cohort, enjoyed the intensity of the seminars. “In just four evenings, we were able to cover more ground than I thought possible. We talked about our own experiences and perceptions as well as the current theories and practice regarding Jewish education. It was extremely generous of Ben Jacobs and the Jewish Studies staff to spend their evenings discussing this important area of study.”

Bringing knowledge to current and future lay leaders of the Jewish community is the hallmark of organizations like the Wexner Heritage Program. Similarly, the Stroum Center for Jewish Studies could bring grounded thinking, academic resources, and critical ideas to Seattle’s lay leadership, nurturing in particular the next generation of communal leaders who are already on campus pursuing degrees in other fields.

Jacobs, for one, is excited about the potential for the future. “The UW Jewish Education experiment this spring was a really exciting venture in having interest and concern in Jewish education as a common denominator for an academic group. It demonstrated that that is an untapped resource.”

Rivy Poupko Kletenik summed it up well: “Seattle is a center for creativity and ideas and innovation. Jewish education should be part of that.”

Note: The opinions expressed by faculty and students in our publications reflect the views of the individual writer only and not those of the Stroum Center for Jewish Studies.
By Hannah Pressman|2017-12-27T10:28:10-08:00November 3rd, 2015|Categories: News|Tags: Jewish Community, Noam Pianko, Seattle|0 Comments