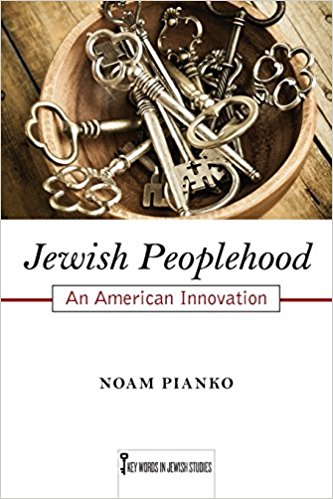 The Stroum Center is proud to announce that Jewish Peoplehood: An American Innovation (Key Words in Jewish Studies), written by Noam Pianko, Professor in the Henry M. Jackson School of International Studies at the University of Washington, recently won The Saul Viener Book Prize from the American Jewish Historical Society.

In the book, Pianko traces the idea of Jewish peoplehood, a term that began to emerge in the United States in the 1930s. At the time, under the leadership of American rabbis Stephen Wise and Mordecai Kaplan, the term “peoplehood” brought to mind a sense of unity beyond any other factors—religious, cultural, geographic, economic or political—that might have divided Jewish people. Pianko indicates that today, however, with the rise of globalization, the idea of Jewish peoplehood seems outdated and he offers as counterpoint an alternative perspective for considering Jewish collectivity for the future.

In their report, the American Jewish Historical Society prize committee noted that Pianko “breaks new ground in demonstrating that the American Jewish experience has contributed key concepts of Jewish self-definition that have shaped the Jewish world more broadly.” Significantly, past historiographers viewed American Jewry as contributing relatively little to the broader development of Jewish thought, but Pianko challenges the “tendency toward exceptionalism in recent writings on Jewish peoplehood.” The prize committee noted that Pianko’s work urges scholars of Jewish history “to broaden the scope of their analysis, and to move beyond a model of Jewish exceptionalism.”