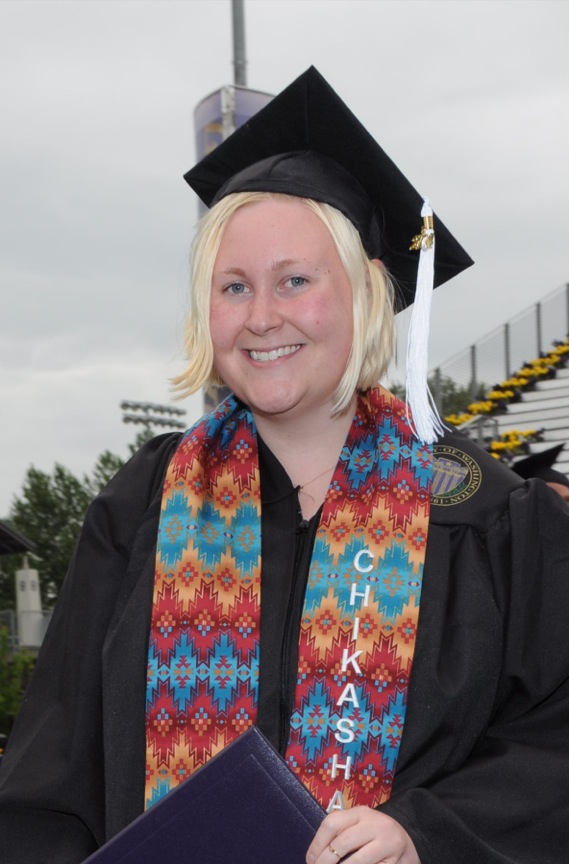 Haley Gustafson graduated in 2014 and is now studying law in Ireland.

Editor’s note: Alumni of the Jewish Studies program go on to do great things! Many of our students are choosing graduate training or career paths that will enable them to make a difference in the world. Here is our new interview with Haley Gustafson, Class of 2014, now a law student focusing on human rights.

Tell us a little about yourself. What’s your hometown? What did you study at UW?

I’m from Seattle, Washington; more specifically South Seattle Lakeridge and Seward Park area. I graduated in 2014 with a major in International Studies from the Jewish Studies program and a Minor in Law, Societies, and Justice.

In this graduation photo, the stole I am wearing is from my Native American Tribe, The Great Chickasaw Nation.

Where are you now and what are you studying?

I am currently in Galway, Ireland at the National University of Ireland Galway studying at the Irish Centre for Human Rights. My programme or degree is a L.L.M. (Masters of Law) in International Human Rights.

What are your career goals?

Beyond being employable, I genuinely want to help humans and people around the world to have access to better lives, whatever that may mean for them. It could be ensuring a community has enough clean safe water for daily living, or assisting in social campaigns against discrimination. I’m hoping this degree will qualify me to work at NGOs or governments that are interested in not only the idea of a ‘better life’ for humans, but also in ensuring that the autonomy and choice for how their lives can be improved stays with the individual being assisted. The main challenge with my career goals is there are so many amazing organizations doing all of the above, and I would be excited to work in any sector of Human Rights, from gender discrimination to water rights. My ultimate career goal is to help humans however I can; as for how and where that will happen, I’m not sure right now!

Jewish Studies is very much a practice of seeing how a minority group interacted with majority groups, with a multitude of rich examples spanning thousands of years.                –Haley Gustafson, Class of 2014

Is there a connection between your Jewish Studies courses and what you’re studying now in law school? How did your UW coursework prepare you for what you’re doing now?

My Jewish Studies courses taught me invaluable lessons about majority rule, and understanding that society perceptions often do not reflect factual realities. Jewish Studies requires the student to look underneath the underneath; my classes taught me to think not just about the question in front of me, but the implications or different facets of the question. Essentially, why do we ask these questions and what is the value of the answer? That’s the beauty of Jewish Studies.

In my coursework I was able to study Talmud and the Rambam, but then also look at the modern history of Jewish life in America and Israel. I have often told people that learning the history of Jewish life is less about Jews and more about every other country or people in the world, and how they as a majority treated a group they thought of as ‘other.’ My studies about Israel and my knowledge of Modern Hebrew have been invaluable in my ability to discuss current events and past events in and around Israel; this topic often comes up in the context of Human Rights. My opportunities to study the Holocaust have made me a better human; genocide is something that is universally horrific, and belongs to no timeframe.

Because the Jewish Studies Center is part of the Jackson School, my Jewish Studies classes were required to adhere to the Jackson School’s rigorous standards of coursework. My Jewish Studies professors were of the highest caliber; their research and contribution to their fields is only overshadowed by their passion for teaching students. My professors truly engaged with students, and were invested in teaching nuance. I feel that learning nuance is a process more than a single fact or conversation.  Nuance is the most difficult thing to learn and to put into practice, yet nuance is vital and is the crux of how human rights became more than theory, but a reality, during my studies. I believe that every department of the University of Washington puts a premium on teaching nuance, but the Jewish Studies program is uniquely equipped to do so. Studying Jewish life isn’t simplistic; Jewish life is vibrant, vast, and always seeking to be self-aware.

Jewish Studies taught me the importance of every perspective, and the ability to know all perspectives are important, valid and require respect. That every voice is equal, until we (humans) start valuing some voices over others.

What other updates do you want to share about your experiences abroad?

Ireland is very cold, windy and rainy, but is remarkably beautiful when it is only cold. I’ve been focused on my studies so far, but plan to travel more now that the weather is improving. If you want to visit Ireland, I suggest you fly into Shannon Airport and take a tour around the West Coast of Ireland. Ireland is breathtaking, but bring a book* or friend, it can be dull at times too. Despite all the sheep memorabilia, it’s mainly cows that I see around Ireland. Lots and lots of cows.

*On the note about books, you should definitely pick up some of the Stroum Lectures series books! The best part of the Stroum Center for Jewish Studies is how it is more than a university department, but is committed to bringing academic research to the community at large. It means I can keep learning even so far away!

Want to see more articles like this?  Sign up for our newsletter!
⇒ Learn more about the Stroum Center for Jewish Studies at the University of Washington, our Sephardic Studies Program, or our Israel Studies Program.
Note: The opinions expressed by faculty and students in our publications reflect the views of the individual writer only and not those of the Stroum Center for Jewish Studies.
By Hannah Pressman|2017-09-04T22:41:56-07:00March 9th, 2015|Categories: News, Personal History|Tags: Alumni|0 Comments