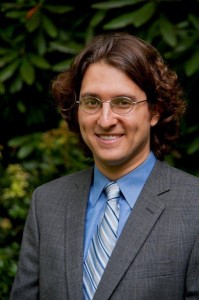 Prof. Devin Naar, whose interest in Sephardic Holocaust history led him on a world-wide search for untold stories.

Editor’s Note: On April 28-30, the  University of Washington will host an unprecedented conference exploring the experiences of Sephardic Jews during the Holocaust. Click here to find out more about “Sephardic Jewry and the Holocaust: The Future of the Field.” Prof. Devin Naar, of the Stroum Jewish Studies Program and the Department of History, has been the symposium’s lead organizer in conjunction with the United States Holocaust Memorial Museum (USHMM).

We recently caught up with Prof. Naar, who shared some of the fascinating backstory behind this month’s symposium, which is the culmination of nearly a decade of research–and, he hopes, the beginning of a new conversation.

1) How did you get involved in planning a symposium with the USHMM? Had you partnered with the museum before, or conducted research there?

For the last eight years, I have been working together on and off (and in four countries) with the USHMM to reconstitute the pre-World War II archives of the Jewish communities of Greece. One might say this is part of the pre-history of the symposium here at the UW. To begin the story, we have to go back to the Second World War. It was at that time that the Nazis confiscated the archives and libraries of Jewish communities in Greece–as in most of occupied Europe. The records of Greece’s largest and most famed Jewish community, Salonica, were thus believed to have been destroyed.

It turns out, however, that at the conclusion of the war, the Soviet military captured some of these archives, brought them to Moscow, and locked them up in a secret archive along with other war spoils. Only when the Soviet Union collapsed did the existence of these records become known. While Russia has refused to return the archives to Greece, the USHMM successfully acquired a set of microfilms of this material and has made it available to scholars for the first time. I have therefore made many trips to Washington, D. C., but only one to Moscow.

What Moscow (and subsequently the USHMM) had, however, turned out to be only part of the pre-war archive of the Jewish community of Salonica. This realization led me on a hunt through the United States, Greece and Israel in search of the other parts of the archives. Other fragments, via circuitous routes, found their way to the YIVO Institute for Jewish Research in New York and to the Central Archives for the History of the Jewish People in Jerusalem. In cooperation with the USHMM, and especially its International Archive Program, I spent extended time in New York and Jerusalem organizing and cataloging the rich materials at each locale. For the most part, these documents, written primarily in Judeo-Spanish, Greek, Hebrew, and French, had remained largely untouched–and in disarray–for the last sixty years or more. I cataloged both collections and helped arrange for each to be microfilmed and digitized. 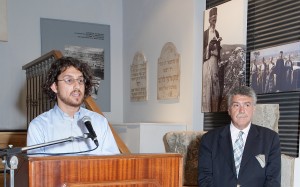 As a Fulbright scholar, Devin Naar delivered the introductory remarks, in Greek, to an exhibition he curated at the Jewish Museum of Thessaloniki in 2006. The President of the Jewish Community of Thessaloniki, David Saltiel, stands to the right.

As a Fulbright scholar in Salonica, via another unanticipated twist, I located yet one more piece of the pre-war (and wartime) archive in a basement of one of the Jewish community’s properties and helped transfer it to the local Jewish Museum. I similarly cataloged this material, prepared it for microfilming and digitization, and curated an exhibition at the Museum based on the preliminary findings. All of the material I helped uncover and describe served as one of the major, previously untapped sources for my dissertation at Stanford University and the current book manuscript I am working on.

It was precisely when I was writing my dissertation that the direct seed for the present symposium at the UW was planted. In 2010, my then-dissertation advisor, Aron Rodrigue

[editor’s note: Prof. Rodrigue is giving the Keynote Address on April 28th], co-led a summer research workshop at the USHMM focused on Sephardic Jewry and the Holocaust. I had the privilege of attending. At the workshop—the first of its kind—scholars from across the country gathered to discuss the state of scholarship about Sephardic Jews and the Holocaust; the amount of scholarship was not particularly overwhelming. Part of the workshop involved time to conduct research utilizing the USHMM’s extensive library and archival holdings in the hope of further expanding the field.

When I began my position at the UW, Leah Wolfson, a program officer for the Center for Advanced Holocaust Studies at the USHMM who had organized the workshop in 2010, contacted me in the hopes that we could put together a follow-up symposium that would provide a venue for some of the participants in the first workshop to present their latest research and also to invite some new scholars to the table. Given my interest in Sephardic Studies and also the dynamic Sephardic community here in Seattle, which counts a number of Holocaust survivors from Salonica and Rhodes, it seemed like a perfect match. We decided to convene the symposium in the spring of 2013, in part, to commemorate the seventieth anniversary of the start of the deportations of the Jews of Salonica to Auschwitz in the spring of 1943.

2) What are some common assumptions about the history of Sephardic Jews and the Holocaust, and how do you think the symposium will counter those assumptions?

I think the first common assumption about the relationship between Sephardic Jews and the Holocaust is that there isn’t any. The Holocaust has generally been studied and remembered as a primarily Ashkenazi phenomenon. The history of Sephardic Jews, an extremely diverse set of populations, is not well known in scholarly or public contexts (both Jewish and non-Jewish) in the United States. The experiences of Sephardic Jews during the Holocaust are even less known, less discussed and less studied. Courses at the University level about the Holocaust tend not to mention Jews from Greece and the Balkans let alone North Africa. The USHMM and Yad Vashem introduced exhibits about places like Salonica only relatively recently and after much effort to do so. Not until 2003 was a commemorative plaque in Judeo-Spanish added to those already extant since the 1960s in twenty other languages spoken by the victims of Auschwitz as part of the camp’s memorial.

The Guerchon family in the Salonica ghetto, 1943. All perished in Auschwitz-Birkenau. (Courtesy of the Jewish Museum of Thessaloniki)

My hope, on one level, is that the symposium will increase scholarly and public awareness about the fact that certain communities of Sephardic Jews also experienced the Holocaust. In addition, I hope that the symposium will provoke some questions: Do Sephardic narratives somehow help us understand the Holocaust better? Or differently? I also hope that the more than a dozen scholars from across the country who will be here to share their work will give and receive valuable input to one another, and begin to form a community of scholars interested in the nascent field of Sephardic Jewry and the Holocaust.

Finally, I hope that the symposium will serve as yet another link between the UW and the broader community—and it is precisely in view of promoting this connection that the History Department’s Hanauer Outreach Fund is serving as a co-sponsor. Seattle is unlike other cities in this country due to the particularly robust mark that Sephardic Jews have left on the city. This symposium, and the Sephardic Studies Initiative of the Stroum Jewish Studies Program more generally, seeks to pay tribute to Seattle’s Sephardic Jews and to remember and reflect upon some of the places and communities from which they or their families came.

3) You have a very personal stake in this academic discussion: as you discussed in a talk last fall, it was your curiosity about your own family’s Holocaust history that led you to study Ladino. Now, the video of that talk has over 1200 views on YouTube (click here to view). How has it felt to have that personal history become so public?

I first told the story of my relatives from Greece during the Holocaust, how I discovered their fate, and how the whole experience led me to learn Ladino and embark upon my current career path, at the invitation of some cousins a few years ago. They wanted a different perspective for the annual Holocaust commemoration program at their synagogue and asked if I would speak about our family, and the story of Salonican and Greek Jewry, more generally. So I went back to my native state of New Jersey. My parents were in attendance, as were other relatives and friends, and many people I did not know (I had never been to that particular synagogue before). It was an extremely powerful experience for me. At a certain point, I actually broke down and started to cry. I had never spoken publically from such a personal perspective before; I had never revealed something so intense and so painful. 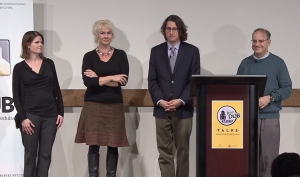 I patterned my JewDub Talk, “In Search of Uncle Salomon,” on that presentation in New Jersey. The more I tell the story publically, the easier it gets. Sort of. The talk is, in some ways, an attempt to bridge the gap between the public and the private, the familiar and the foreign, the distant and the intimate, the safety of a world here in the twenty-first century United States and the seemingly distant and devastating world of the Eastern Mediterranean of the mid-twentieth century. The moments in which I remove the distance, I let down my “objective,” scholarly guard, and in which I remind myself—and inform the audience—that these people I am speaking about are not just any people, but they are my people, my family, my great aunt and uncle, my cousins, whom I never met—that turned out to be difficult to do and to say, especially in public.

I am glad that many people are viewing the video. I only wish there were others like it. Telling the story of my family served as a vehicle to discuss the community of Salonica, and Greece, and Sephardic Jewry more generally—to have a few words of Judeo-Spanish out on the internet. I did not have an unrelenting desire to tell this often overlooked story. I initially did so because I was asked to do it, and I realized that it was a story that not many others were telling. I have, at times, felt confronted with the following question: if I do not tell the story of this community, who will?

I hope that the participants in our symposium will help answer this question.

Want to see more articles like this?  Sign up for our newsletter!
⇒ Learn more about the Stroum Center for Jewish Studies at the University of Washington, our Sephardic Studies Program, or our Israel Studies Program.
Note: The opinions expressed by faculty and students in our publications reflect the views of the individual writer only and not those of the Stroum Center for Jewish Studies.
By Hannah Pressman|2017-09-04T22:42:37-07:00April 10th, 2013|Categories: Jewish History & Thought, Our Events, Sephardic Studies|Tags: Devin Naar, Faculty, Holocaust, JewDub Talks, Personal History, Sephardic Studies|0 Comments