Purim unmasked: Purim art and artifacts from around the world 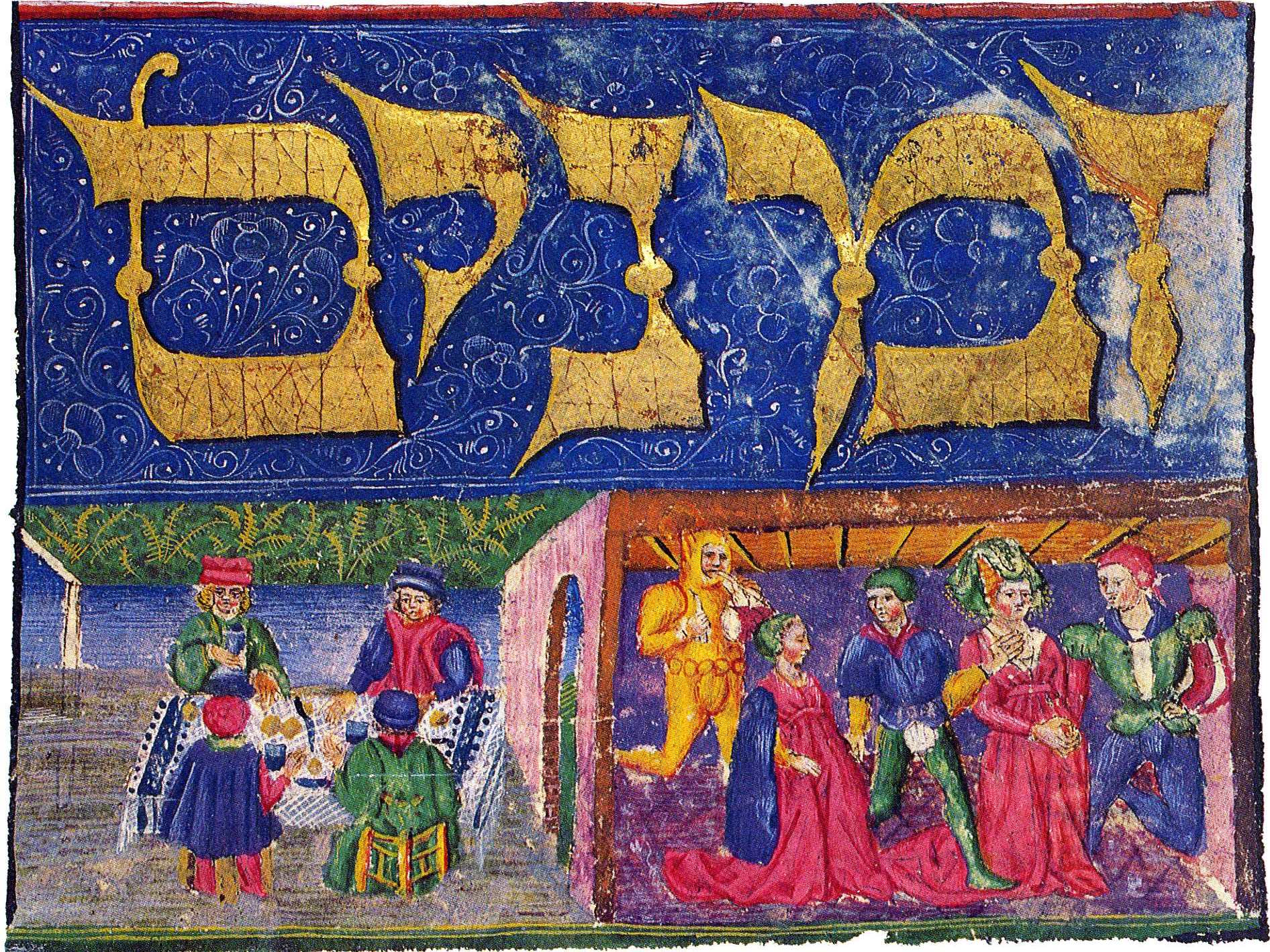 We recently caught up with Shalom Sabar, professor of art history and Jewish folklore at the Hebrew University of Jerusalem, and asked him about Purim customs and artworks.

In your research into Jewish art and folklore, what is one of the most unusual Purim customs or artifacts you have discovered?

Oh, there are so many! One example is a decorated ketubbah (wedding contract) for the wedding of Zeresh and Haman – it was apparently drawn on the island of Rhodes in the 19th century (based on the art and script). It is worded as a regular ketubbah, but everything is in the negative: instead of be-simana tava (“with a good sign or good luck”), it opens with be-simana ra’a (“with a bad sign, dark fortune, in time of curse and failure”). According to this ketubbah, Haman and Zeresh’s wedding took place in Shushan the capital in the year 3404 from the Creation, or 356 BCE; the bridegroom is introduced as “the cursed, idiot, forest pig…etc.” This is the opposite of Sephardic ketubbot, which list many positive honorifics for the couple. 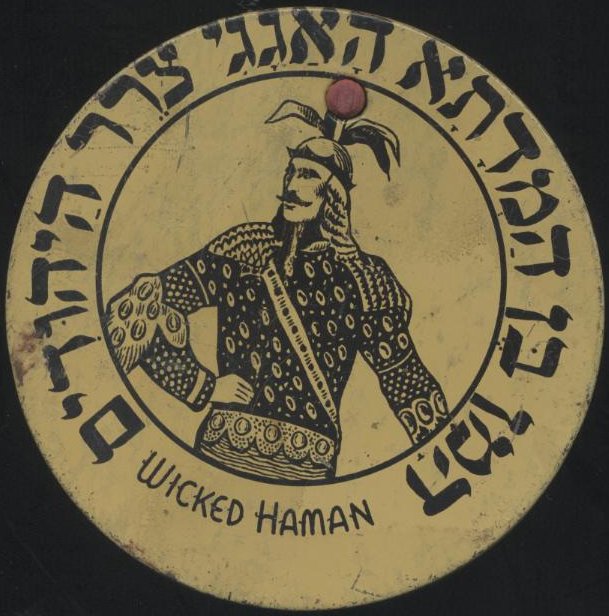 This metal and wooden noisemaker was produced by Barton’s Candy. American, early 1950s. From the collection of Prof. Shalom Sabar.

Of course, the language doesn’t sound very “politically correct” to modern ears, but in the past Purim was often used by Jewish minorities as an opportunity to denounce among themselves those who had persecuted the local Jews. That’s how we have in many communities what is called Purim Sheni, an historical event commemorating the salvation of a community in times of trouble, e.g., Purim of Saragossa, Purim of Ancona, Purim of Buda, etc.

Some other examples of unusual artifacts from more recent times: after the Holocaust, a noisemaker (grogger) which was made with the image of Hitler as the new Haman; and in Morocco, a Megillat Hitler, which was composed in Judaeo-Arabic in 1946 in the style of an Esther Scroll and recited in Moroccan synagogues. I have a copy at home in Jerusalem.

Because of its setting in the Persian Empire, do you think the Purim story has a different significance to Middle Eastern Jews than it does for American Jews? 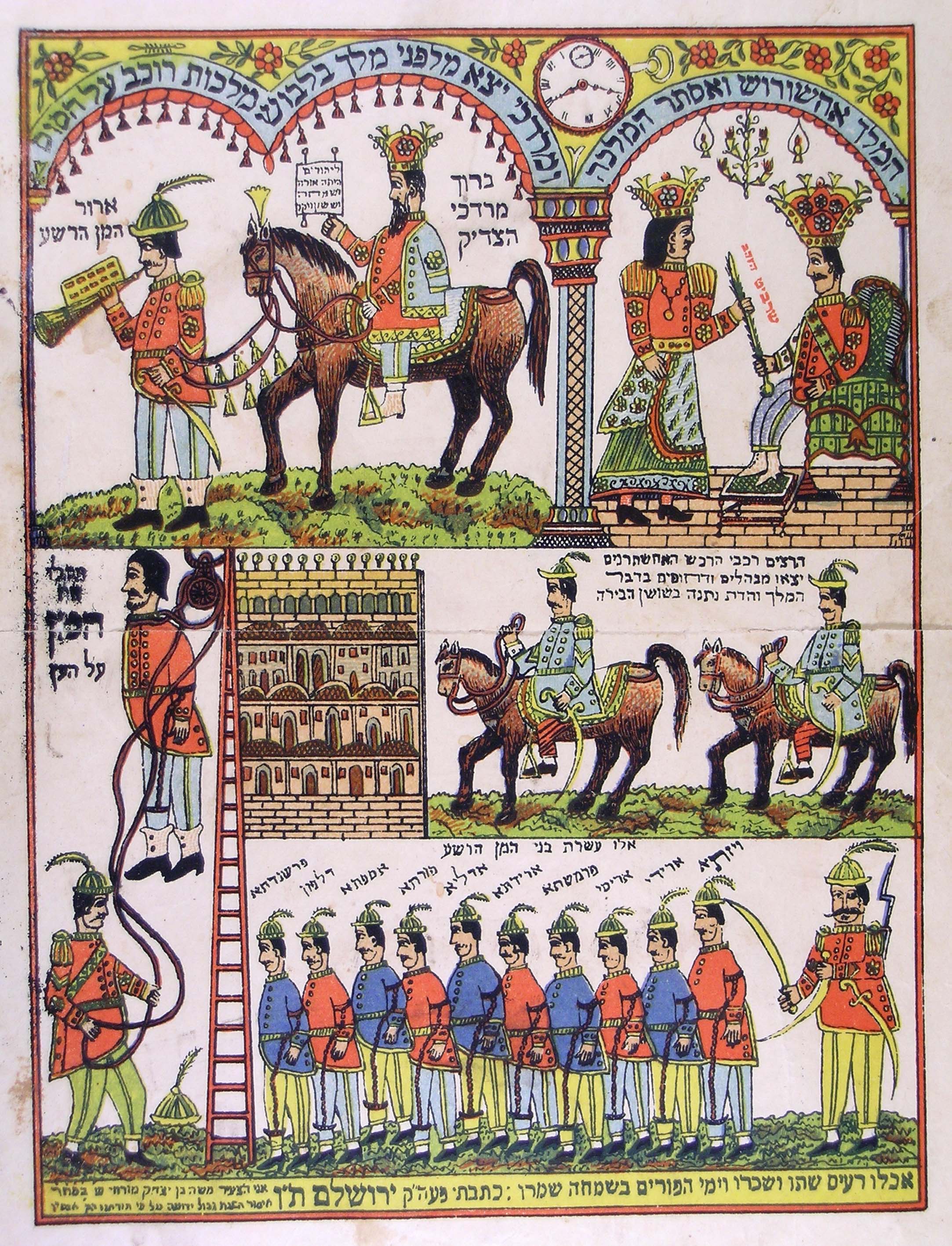 Persian Jews, who really developed a whole folklore around the Esther story. They call themselves “Esther’s Children” and used to (and some still do) visit the supposed shrines of Esther and Mordechai in the Persian city of Hamadan, believed to be ancient Shushan. The tombs have Hebrew inscriptions and the new construction over them was planned in recent times by a Jewish architect (from Tehran, if I’m not mistaken).

Persian Jews have long poetic stories re-telling the story of Esther in Judaeo-Persian, embedded with many legends, stories from the midrash, Islamic sources, etc. This work is called Ardashir Nameh, composed by the noted 14th-century Jewish-Persian poet Mulana Shahin Shirazi, and some editions of it in manuscript form are beautifully illuminated (especially from Isfahan in Iran, 17th century). 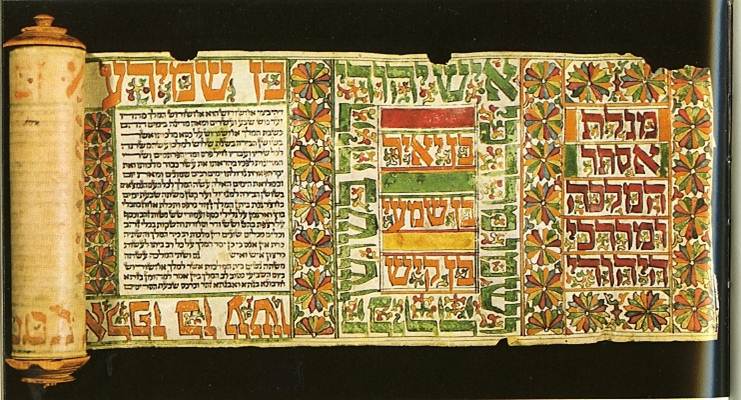 This 19th-century megillah from Baghdad contains Mordechai’s genealogy along the upper margin as well as Haman’s genealogy, written upside down along the lower margin.

I have handled some 150-200 original old illuminated megillot (scrolls relating the biblical story of Esther) – from possibly every community – Italy, Greece, Morocco, Kurdistan, Iraq, Iran, Poland, Germany, Alsace, Slovakia, etc. I have described or analyzed many scrolls for collectors and dealers as well. Also, modern Judaica artists often bring me their scrolls for examination and scientific evaluation, including several scrolls by Haredi (ultra-Orthodox) women in Jerusalem (usually the husbands bring the scrolls, but I have also met some of the women artists; usually they do only the art while the calligraphy is by a man known as a sofer stam).

Having said that, I was one of the first who handled the earliest dated illuminated scroll, from 1564, which was surprisingly enough drawn by a woman, Estellina, daughter of Menahem, in Venice. This scroll was auctioned by Sotheby’s in 2009 and bought by the collector Rene Braginsky of Zurich, for whom I have cataloged many illuminated Hebrew manuscripts, especially ketubbot. A couple of years ago a dealer showed me an “unimportant” megillah, which after much research I identified as the earliest scroll of Shalom Italia, the most important artist of Esther scrolls in 17th-century Amsterdam. 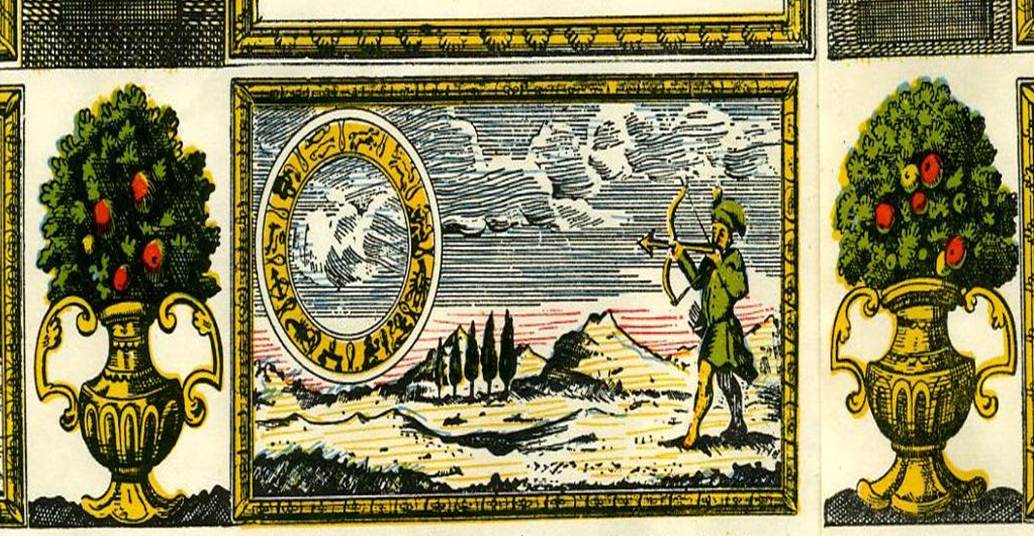 In this reproduction of an 18th-century Dutch megillah, Haman is depicted as shooting an arrow at the zodiac, forecasting the future. From the collection of Professor Shalom Sabar.

Shalom Sabar‘s areas of research include Jewish art and folk art, material culture and ephemera, objects associated with the cycles of life and of the year, and customs in the Jewish communities in Europe and in Islamic lands, with special emphasis on the culture of Italian Jews and the Sephardic diaspora in Europe, the cultural and artistic inter-relationships between the Jewish communities and their Christian and Muslim neighbors, and the image of Jews and Hebrew writing in art. Sabar has published over 200 books and articles. He also collects Jewish art objects and Israeli ephemera, and guides tours to Jewish sites in Europe, North Africa, India and Central Asia.

Want to see more articles like this?  Sign up for our newsletter!
⇒ Learn more about the Stroum Center for Jewish Studies at the University of Washington, our Sephardic Studies Program, or our Israel Studies Program.
Note: The opinions expressed by faculty and students in our publications reflect the views of the individual writer only and not those of the Stroum Center for Jewish Studies.
By Hannah Pressman|2019-03-18T16:08:31-07:00February 18th, 2013|Categories: Global Judaism|Tags: Art, Culture, Jewish Holidays, Purim, Religion & Ritual, Ritual, Sephardic Studies|0 Comments