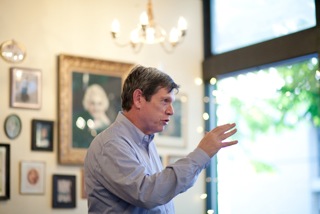 Steven Cohen illustrates a point at the learn-in with young leaders. Photo by Meryl Schenker Photography

Last week, the Stroum Jewish Studies Program at the University of Washington held its annual Stroum Lecture series. This year Jewish Studies hosted Professor Steven Cohen, a sociologist from Hebrew Union College in New York. He has spent his time as a public intellectual blurring the lines between the academy and the community, studying issues central to Jewish identity, particularly vis-à-vis the State of Israel.

Professor Cohen gave two public lectures on Monday and Wednesday night, titled Jews in the Borderland: The Complicated, Fluid, and Episodic Nature of Jewish Identity (for Some) Today, and Devotion, Distancing and Disloyalty: The Diversity and Complexity of American Jews’ Relationships with Israel Today, respectively. In addition, he spoke at a young adult “learn-in” as part of a Jewish Studies initiative to broaden the Stroum audience and better engage with young Jewish professionals in the Seattle area. Initiated with Stroum lecturer Ilana Pardes three years ago, the idea behind the “learn-in” was to create a bridge between the academic topics at hand and young community leaders in Seattle. This year, dedicated community members, representing shuls across denominations, leadership from Hillel, Jewish non-profit organizations, as well as Jewish members from (non-religious) non-profit organizations gathered for an evening of food, conversation, and, as it turns out, intense interrogation.

Professor Cohen argues that his research, which he presented during Monday and Wednesday night’s lectures, demonstrates a causal relationship between intermarriage and a decrease in connection to Israel.  A self-proclaimed Zionist (he made Aliyah in 1992, and “believes in such a thing as the Jewish people whose expression is in the State of Israel”), he made quite the persuasive point: young people who marry Jewish raise their kids Jewish. The decision to inmarry today is a far more intentional act than it was some years ago. As such, it reflects both Jewish residential density and Jewish commitment. Their kids then grow up Jewish, go to Jewish summer camp, go to Israel, and engage with/support Israel. Children of intermarriage, on the other hand, are only 25% likely to identify as Jewish.

The decline in young people’s connection to Israel seems to be one of Cohen’s principle research interests. He finds it highly problematic that young people are now less interested in, or to use his term, less engaged with Israel than ever before. Acknowledging that his research has occasionally been misconstrued to mean that young people are “disillusioned” or “sick of Israeli politics” because of “Israel’s human rights issues,” Cohen declared that that is not the case: the causal factor is intermarriage. (As an aside, I had the opportunity to ask Cohen a burning question at the end of Thursday’s event. I wondered how distance from the Holocaust affects engagement with the State of Israel. Cohen said he wondered the same thing and will include these questions on his next set of surveys.)

I think Cohen struck a chord that night because we are the demographic of his research, and the numbers were, quite honestly, frightening, for anyone concerned with the future of the Jewish people and Jewish identity.

As you can imagine, this caused a lot of discomfort among Thursday’s young audience. I’m sure most of us in that room have been hearing “marry Jewish” (and make your mother happy) our entire lives. I was raised in a Jewish home, and if my Jewish experience (religious school, Jewish summer camp, trips to Israel) bears any resemblance to the lives of other American Jews, the message to marry Jewish was front and center to all of these programs. I understand why this message is so critical, but it always made me just a little uncomfortable.

As a graduate student in history, I have read and seen the results of the brutal ethnocentrism and nationalism of the 20th century. The Second World War and the war in Yugoslavia yielded ethnic cleansing or genocides (whichever your term of choice) on a scale history had not seen. And ethnic cleansing/genocide is a thoroughly modern product that, according to Zygmunt Bauman, emerged from a marriage between modern nationalism and the post-World War I political landscape. I believe Benedict Anderson and Norman Naimark have valid points.  However, despite the problems with nationalism, I have to struggle with my own beliefs in the continuity of the Jewish people, Jewish identity, and the Jewish State. And I think many of the young adults who heard Cohen that night or read his research need to do the same.  These are difficult questions central to Jewish life, and while we may not resolve them, let’s try to engage with them and think critically about them. 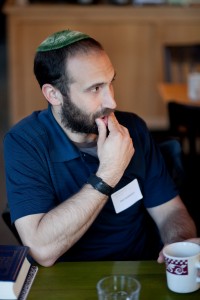 However, I actually do not think this was the main takeaway from Cohen’s lectures. The opportunity for all of us, as young leaders and members of the Seattle Jewish community, is to access and interact with what he calls “Borderland Jews,” who are often the product of intermarriage. Jewish identity is more fluid than ever before and no longer adhered to one orthodox definition (Traditionally, as both Orthodox Jews and Conservative rabbis would hold, a person is Jewish if the mother is Jewish or if s/he undergoes an orthodox conversion). Rather, Cohen’s surveys demonstrate that there is a growing number of Americans with a somewhat fuzzy Jewish identity: Christians with Jewish parents, Jews with Christian parents, and the children of the intermarried whose parents did not undergo conversion. Ultimately these “Borderland Jews” are much less, if at all, affiliated in the Jewish community. If the goal is to foster Jewish identity and ultimately create engagement with Israel, then what Seattle institutions must learn is how to accommodate and welcome these “Borderland Jews” in their programming. The crowd at the learn-in very much reflected these fluid identities, and I think that is why the conversation was so stimulating. Indeed that was the point.

Want to see more articles like this?  Sign up for our newsletter!
⇒ Learn more about the Stroum Center for Jewish Studies at the University of Washington, our Sephardic Studies Program, or our Israel Studies Program.
Note: The opinions expressed by faculty and students in our publications reflect the views of the individual writer only and not those of the Stroum Center for Jewish Studies.
By Sarah Zaides|2017-09-04T22:42:57-07:00May 1st, 2012|Categories: Global Judaism|Tags: Cohen, Events, Holocaust, Israel, Jewish Identity, Sarah Zaides, Stroum Lectures|0 Comments