Human Trafficking & the Lessons of Passover 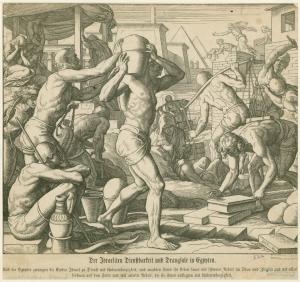 “The servitude and distress of the Israelites in Egypt” (1860). Engraving by Leonhard Joch. NYPL Digital Gallery Image ID: 1621144.

As we gather around our Passover tables this year, we will recall the Torah’s account of how we were led from Egypt with “a strong hand and an outstretched arm.” We will celebrate our freedom and joyfully sing Avadim Hayinu, Atah Bnei Horin—we were slaves and now we are free.

Yet as we recline as free people, drinking wine and slurping matzah ball soup, in our own community—right here in Seattle—there are people who are still slaves. In the house down the street or the building up the way, there live people who have been trafficked. These individuals have been dealt with shrewdly and are being oppressed ruthlessly, forced to work at bitter tasks against their will as our ancestors were by cruel Pharaoh and his legions.

It is estimated that approximately 29 million people—over half of whom are children—are trafficked as human slaves worldwide each year. Once enslaved, they are forced to perform both legal and illegal work ranging from “prostitution to exotic dancing, street peddling to housekeeping, childcare to construction and landscaping…[/fusion_builder_column]

[forced work in] restaurants and nail salons,” according to King County’s web site.

Due to its many ports of entry—SeaTac, the Port of Seattle and border crossings with Canada—Seattle has been notoriously identified as a human-trafficking “hot spot.” Seattle Mayor Mike McGinn has estimated hundreds of people, including many juveniles, are trafficked in the region each year, and a 2008 study of commercial sexual exploitation of youth in King County estimated that at least 300-500 girls were being trafficked at that time.

Though in 2003, Washington became the first state in the nation to criminalize human trafficking, the crime is still prevalent. As one form of response, King County recently launched an awareness campaign for victims and the public, posting anti-trafficking ads in English, Vietnamese, Korean and Spanish on the sides of Metro buses. The ads feature silhouettes of people alongside testimonials such as: “He promised me a place to stay, then forced me to work as a prostitute. Help stop human trafficking.”

Example of a Metro bus ad to raise awareness of trafficking. Courtesy of https://www.kingcounty.gov/healthservices/health/injury/humantrafficking.aspx

The University of Washington has also taken a lead in raising awareness and researching the consequences and contexts of forced labor; last summer, its Women’s Center created an anti-trafficking task force that in January hosted a conference on “Human Trafficking in an Era of Globalization.”

Many in the Jewish community recognize that as long as men, women and children cry out against the oppression of trafficking, a modern-day slavery, we are obligated to heed their cries. In 2010, JConnect Seattle spurred activism efforts through a Freedom Shabbat program, and this May, UJA-Federation and the modern Orthodox social justice group Uri L’Tzedek will host We Were Slaves, an all-day conference in New York City to explore the Jewish obligation to combat sex trafficking.

But there is more to be done.

This year, when we taste the salt water recalling our ancestors’ tears and the maror that represents the bitterness of their suffering, let us recall that there are still those among us who cry and suffer—and that it is in our power to stop it. Pay attention; open your eyes and speak up if you see an abusive employment situation, note people locked inside a residence or workplace, or hear of a “debt” owed by an employee to an employer. And educate yourself: learn more through the Washington Anti-Trafficking Network (WARN) and Washington Engage, both anti-trafficking organizations that seek to eradicate sex and labor trafficking in Washington State.

By doing so, we may one day be able to sing on behalf of everyone in our community: Avadim Hayinu, Atah Bnei Horin—we were slaves and now we are free.

Lauren Kurland received ordination and a Masters in Jewish Education from the Jewish Theological Seminary in 2005. Previously, she received a BA in Education and Social Policy from Northwestern University. After graduating from rabbinical school, Lauren served for five years as the education director at Ansche Chesed, a synagogue on the Upper West Side of Manhattan. Most recently, Lauren served as associate director for educational resources at American Jewish World Service, supervising the development of educational resources designed for domestic Jewish audiences. She and her family are delighted to reside in Seattle, where they are every day reminded of the natural beauty of this magnificent world.