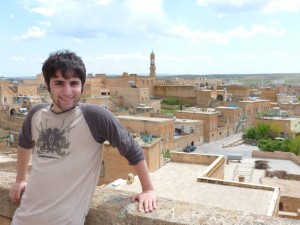 Aaron Lerner at the village of Midyat

Aaron Lerner is a rising senior at the UW who studies history and religious studies. He greatly enjoys learning about different cultures and helped lead inter-religious dialogue efforts as a sophomore. Aaron just finished a year abroad in Turkey, where he studied Ottoman history, Byzantine History, and Islamic Philosophy. His time abroad included travels all over the country, from Cappadocia to the Southeast, which enabled him to learn about Turkish history on the ground.

This blog post, the first of a series for JewDub, is an account of his travels in the Southeast region.

This past week has been my most unique week in Turkey. I got the chance to visit several cities  and villages in Southeast Turkey, including Antep, Urfa, Hasankeyf, and Mardin. This trip to the Southeast has been one of the most eye-opening experiences of my life. Never before have I been to such a unique place. Even for the Turkish students I travelled with, it was like going to another country, for the Southeast is much different culturally and economically from Istanbul. It tends to be far more rural and conservative, and visiting the region and its cities was like stepping back into the Ottoman era or even earlier in some cases.

Many of these cities were very similar, in having Seljuk and Ottoman era-style mosques (some are in Umayyad style as I saw in Antep), with people living in ancient buildings, while at the same time experiencing the rapid urbanization that Turkey is going through.

The first town I visited was Antep, also known as Gaziantep. It is a mostly Turkish city in the Southeast known for its excellent baklava (different towns in Turkey are home to unique foods and treasures), as well as its hand-made copper wares. It is home to beautiful mosques and an old bazaar. I myself bought a lot of bakr (copper) from the bazaar, and spent the rest of the day at a ceramic museum which housed remarkably intact Roman mosaics. I couldn’t help but notice how similar depictions of the Greek god Dionysus were to depictions of Christ that I saw in Cappadocia and the Orthodox churches; this demonstrates to me how much cultures and religions influence each other. 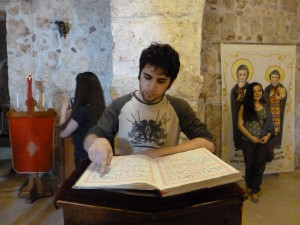 After spending the night in Antep, we travelled to Sanli-Urfa. En route to that city, we stayed in atraditional mud hut and stopped in a cave where the prophet Ayub

[Job] (PBUH) meditated in the neighboring mosque. Entering the cave of Ayub made me reflect upon the story of Job, and how the story of Job relates to the suffering one can go through-and with patience-come out as an even better person afterwards. I said the shema [a Hebrew prayer], did some Islamic-style prayers, and meditated in the cave, and I must admit that it was a somewhat transcendent experience. Whether or not Job/Ayub even existed, it was still a unique experience being in the cave. Adding another layer to this inter-faith experience, I then visited the nearby mosque and saw young children reciting the Qur’an.

The next town I visited was Sanliurfa, which is supposedly the birthplace of the prophet Ibrahim [Abraham] (PBUH), and the site where local and Islamic legend says he faced the evil king Nimrod. According to the legend, Nimrod tried to burn Abraham, but God intervened and turned the fire into a lake and the wood into fish. The lake and fish are still in Urfa, but one must be careful not to eat one of the fish-or you may become blind. In Urfa I also visited the cave where Abraham was born, walked around exploring some beautiful mosques, and climbed up an old fortress to watch the sunset over Urfa.

After Urfa I went to the village of Midyat and visited two Syriac monasteries, most notably the monastery of St. Gabriel. These monasteries have been around since the days of early Christianity, and they are some of the longest-lasting monasteries in terms of activity in the world today. I saw beautiful ancient churches and incredible landscapes. It was also interesting to see the Syriac language, an ancient Semitic language similar to Hebrew that is used in the Syriac Monk’s liturgies, still in use. It was like stepping back in time to visit the Assyrian Christians, a way to appreciate the ancient heritage of early Christianity being kept alive in the present. 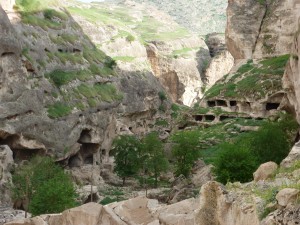 My trip was not all nice, however. The town of Hasankeyf, an ancient city that is home to beautiful ruins, will soon be flooded by a dam that the Turkish government is building on the Tigris river. I met several Kurdish kids there who will soon be forced out of their homes when they become flooded. For the first time since being in Turkey, I was exposed to a direct injustice the Turkish government was committing against the Kurdish people in the name of development. I can only imagine what it must feel like for them. It is such a tragedy that a treasure that is home to such amazing ruins will be lost forever.

The culture of the Southeast region of Turkey was very different, being much more conservative than I was used to. Yet it was also very welcoming, especially in the city of Mardin, which has not changed since the Ottoman era. In Mardin I saw Syriac Churches next to Muslim mosques and a Jewish cemetery, a visual and architectural representation of the co-existence of different faith traditions in the region.  Mardin is changing very quickly, and the region has seen much conflict and hardship over the past century from genocide to Kurdish revolts. I will truly miss Southeastern Turkey, having never been to such an amazing place before in my life.