Check out the radio interview of our own Prof. Devin Naar by Brandi Kruse on 97.3 KIRO FM (excerpt below): 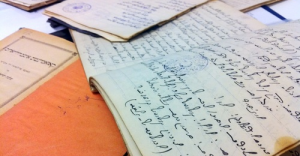 “After embarking on an endeavor to understand his own legacy, a University of Washington professor has set out to preserve a historic Jewish language that was nearly decimated during the Holocaust.

It is estimated that fewer than 150,000 people worldwide still speak Ladino, a Sephardic language that is also known as Judeo-Spanish. In contrast, there are an estimated three million Yiddish-speaking Jews, according to UNESCO.

In 1492, during the rule of King Ferdinand and Queen Isabella of Spain, Jews and Muslims were forced into exile in an attempt to unite the kingdom under Christianity. Ladino became the language of those whose Jewish ancestors settled in portions of the Ottoman Empire that would become modern day Greece, Bulgaria and Turkey.

Devin Naar, The Marsha & Jay Glazer Assistant Professor of Jewish Studies and assistant professor of History at the University of Washington, can trace his ancestry back to the Ottoman Empire. His grandfather was a Ladino-speaking Sephardic Jew who was born in Salonika, Greece and immigrated into the U.S. at the age of 7….”

Read more and listen to the interview here.