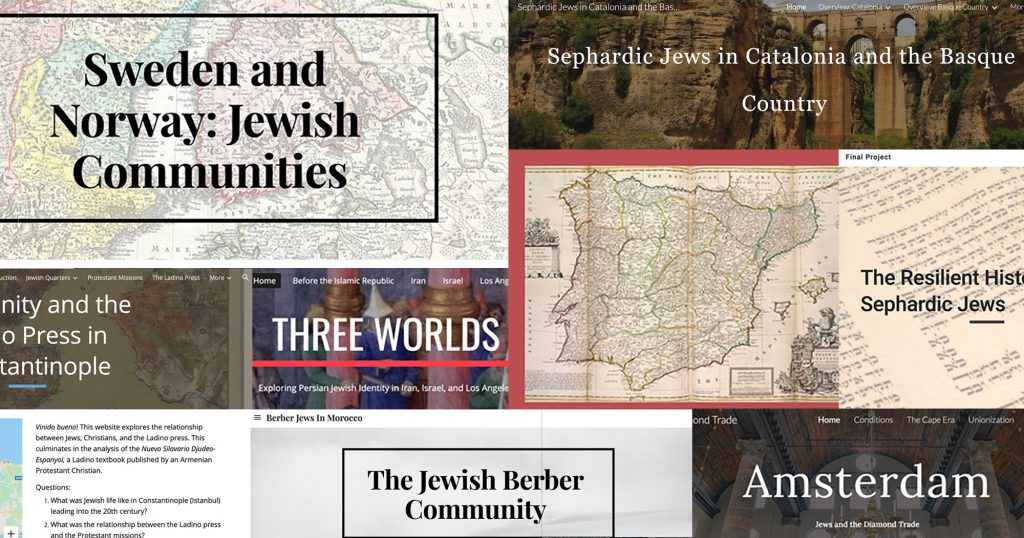 Jewish history is truly global history, with shifting historical centers and peripheries interlinked by ideas, commerce, migration, and geopolitics. The students in Liora Halperin’s Jewish Cultural History class in winter 2021 had the opportunity to explore this interconnected history in early modern and modern times through the study of primary sources and scholarly histories.

In parallel, students developed individual projects about one Jewish community, world region, or local topic that had particular interest to them because of their own family history, language training, or previous studies — or simply because it was intriguing to them and they wanted to learn more.

Students developed their individual topics starting early in the quarter, began to compile library sources, links, and visual and audio material and then met with and shared ideas with assigned peer review groups. All of this happened with an eye toward the final project: a website telling the story of their topic in an accessible format, complete with images, maps, links and, in some cases, music and video. In addition, students turned in written essays (not included on the websites) that placed the story of their chosen topic in the context of the broader, multi-sited Jewish history that they had learned over the course of the quarter.

“These students put enormous amounts of work into developing and sharing their knowledge of Jewish history in innovative ways,” said Liora Halperin, Associate Professor of International Studies, History, and Jewish Studies and the Jack and Rebecca Benaroya Chair in Israel Studies at the University of Washington.

“Their projects remind us of the distinctiveness and diversity of Jewish experience at the local and regional level, the influence of transnational trends on the lives and horizons of Jewish communities, and the ways individuals’ lives are inflected by gender, class, and religion. They also show us how communities hold memories and dynamically adapt cultural practices across generations and across geographical distance.”

Learn more about, and view, a selection of this year’s projects: 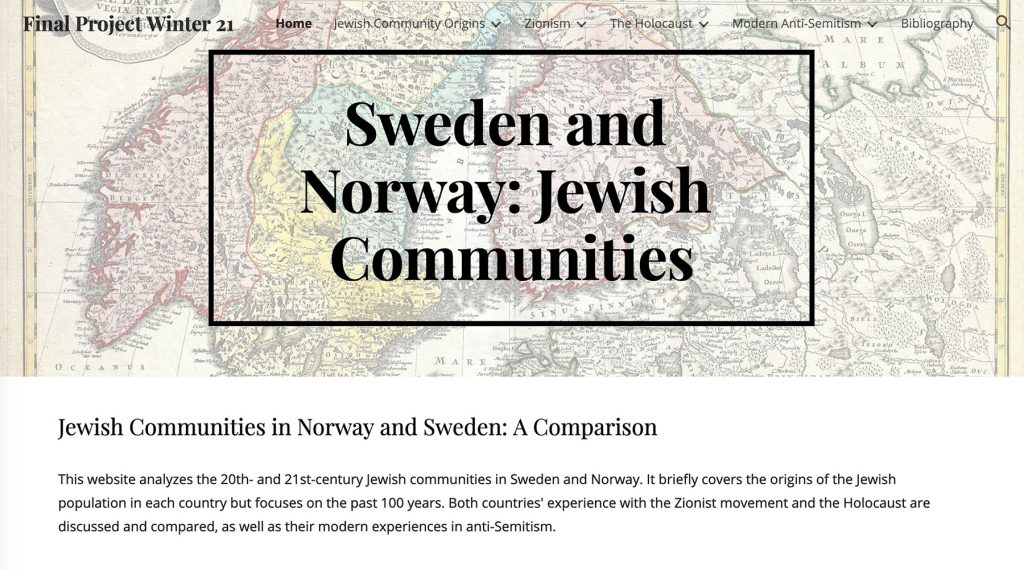 Shaela Cole, a psychology major from Lacey, WA, took the opportunity to focus on a place with family connections: Scandinavia. “I chose this topic,” she said, “in order to further explore my Scandinavian heritage and its relationship with Judaism and the Holocaust. Denmark is typically the focal point of Scandinavian Holocaust discussion, so I found it enlightening to learn about Sweden and Norway’s involvement in the Shoah.” By comparing the stories of the Jewish communities in Sweden and Norway, which share many cultural characteristics, she learned more about their distinct histories. 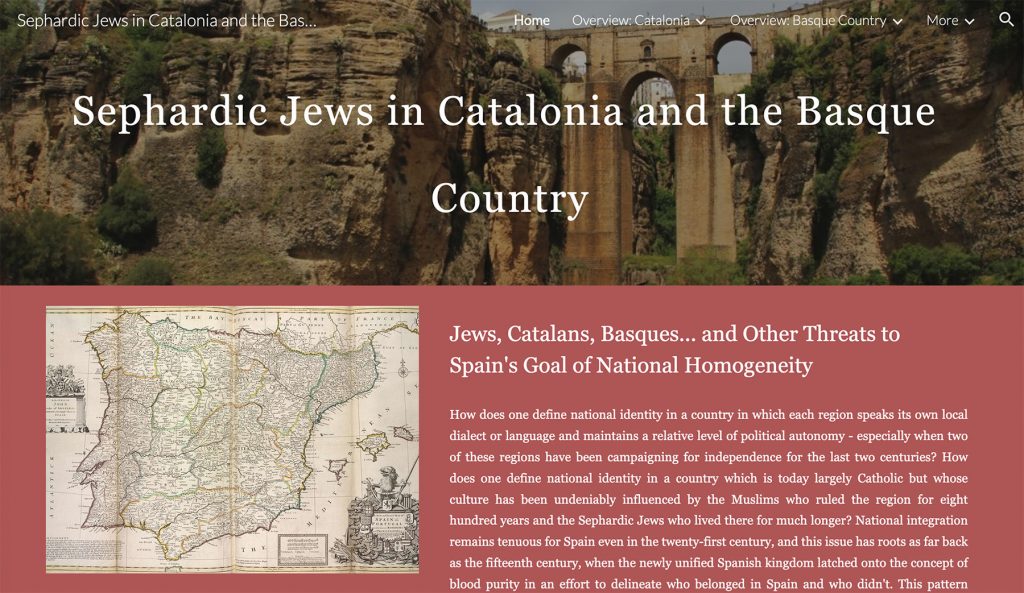 Ryan Forrester, an international studies major from Mukilteo, WA, focused their project on Jews in the Iberian Peninsula, specifically Catalonia and the Basque Country. After having spent a year living in Spain and travelling in the Basque country, they were intrigued to learn more about Ladino and also to find out whether there were Basque Jews or if there was a Jewish variant of Euskara, the Basque language. They came to understand that the story of both Jews and ethnonationalist separatist movements in Northern Spain could be told within a broader focus on tensions between ethnonational difference and national unity within Spanish history. Their “big picture” takeaway from this course,” they said, “is that the world is that humanity is incredibly complex and overly simplistic attempts to divide people into discrete groups and categories will inevitably result in the loss of nuance and the erasure of cultural diversity.” 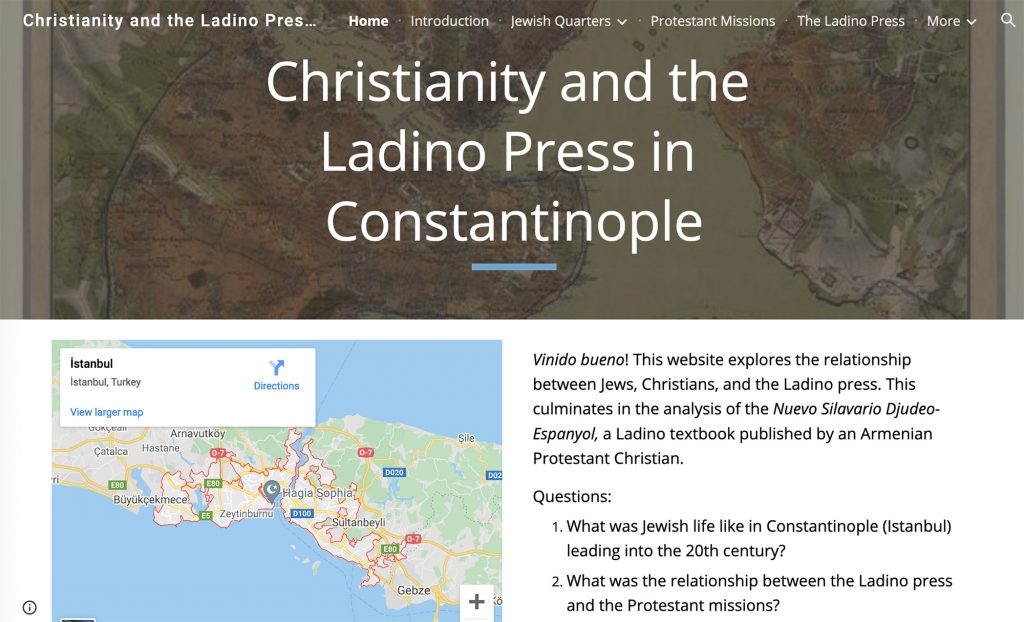 Frances Johnson, a fourth-year history major from Shoreline, WA, had taken several Jewish studies courses before this one and, in the summer of 2020, studied Ladino in UW’s own summer course, taught by David Bunis, of the Hebrew University of Jerusalem. She decided to challenge herself by working to translate and then historically contextualize a Ladino textbook from the UW’s Sephardic Studies Digital Collection. The resulting project placed this unique source within the history of Ladino publishing and Christian missionary activity toward Ottoman Jews. “Through the process of translating Nuevo Silavario Djudeo-Espanyol (a Ladino textbook published by an Armenian Protestant Christian),” she said, “I developed a greater understanding of Jewish life — and its shared histories — in Constantinople at the turn of the 20th century.” 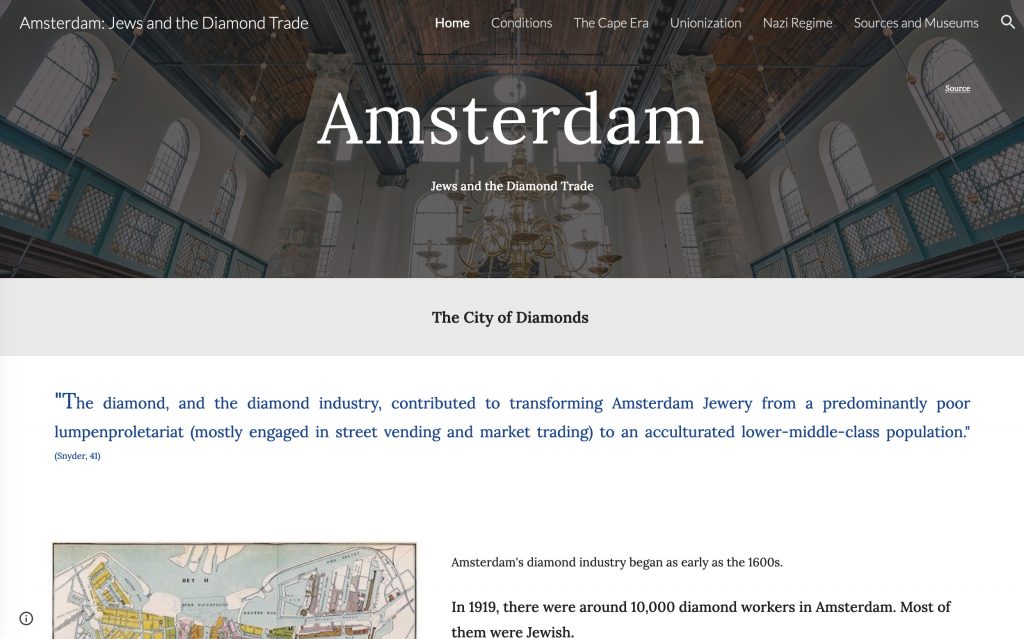 Marissa Levine, a third-year history major from Tampa, FL, who had lived in Germany and studied German, became interested in the Jewish history of nearby Amsterdam. Eventually, she settled on the fascinating history of Amsterdam’s historically Jewish-dominated diamond industry. In her project, she reflected on the different positions Jews held within the economic hierarchy of the industry, labor politics, and the fate of the industry during and following the Nazi invasion of the Netherlands in May 1940. Her main takeaway from the project, she said, was that “the renowned reputation of the Amsterdam diamond industry was because of the efforts that the primarily Jewish diamond workers contributed in building the industry.” 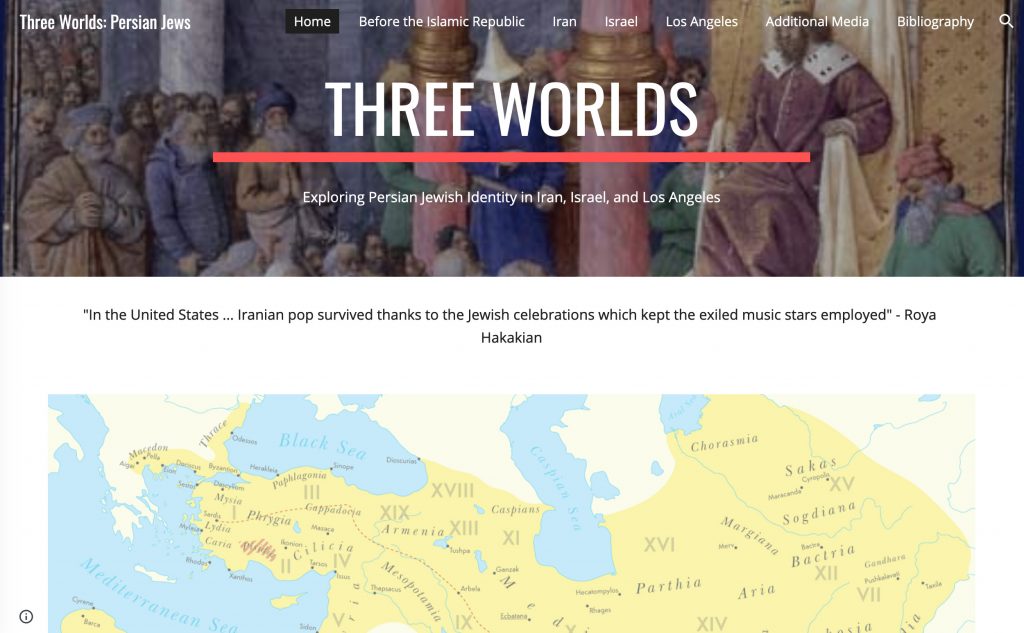 Andrew Nadeau, a fourth-year mechanical engineering major from Tacoma, WA, chose to delve into the history of Jews in Iran and the Persian Jewish diaspora. Their project, spanning Iran, Israel, and Los Angeles, showcases major historical sites, experiences of migration, and cultural production, complete with video clips, images, and profiles. “In addition to learning of the wide scope of Jewish languages such as Ladino, Yiddish, Judeo-Persian, and Judeo-Arabic,” Andrew said, “this course and project combined to reveal a history of Jewish people around the world trying to maintain their identity while striving for acceptance and equality from their neighbors and home countries, no matter how fierce their national pride and early their contributions to art and education.” 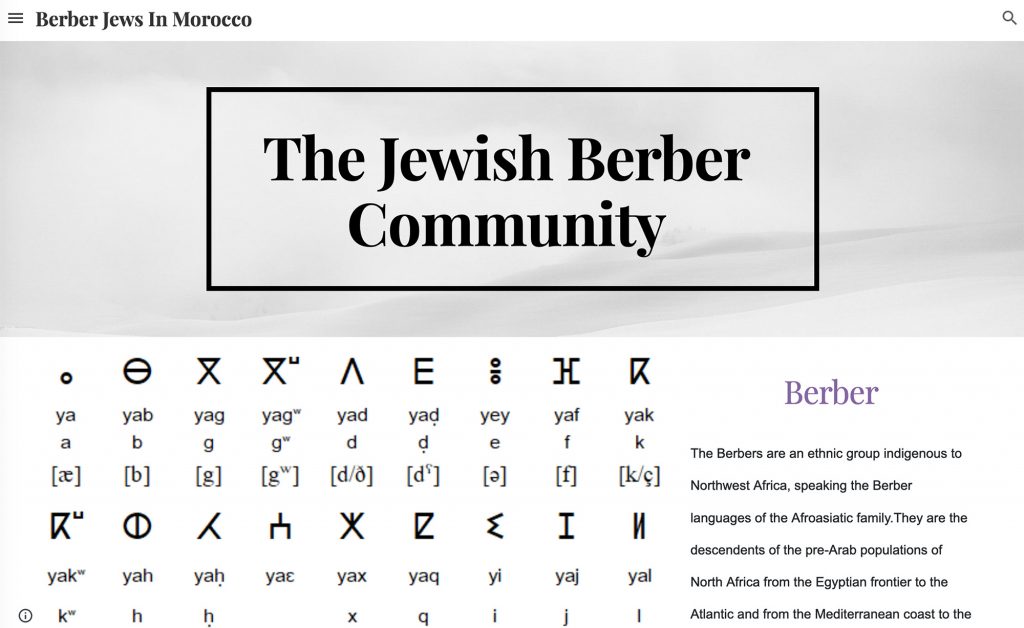 Corbin Phelps, a first-year biochemistry major from Vancouver, WA, chose to learn about the history of Berber Jews in Morocco. This community, which long predated both the Islamic conquest of the area and the influx of Sephardic Jews after 1492, mostly departed for Israel in the second half of the twentieth century under the rising pressures of Zionism and Moroccan nationalism. But both those who left and those Berber Muslims who remain, his project shows, remember past Jewish-Muslim relations with a degree of nostalgia. 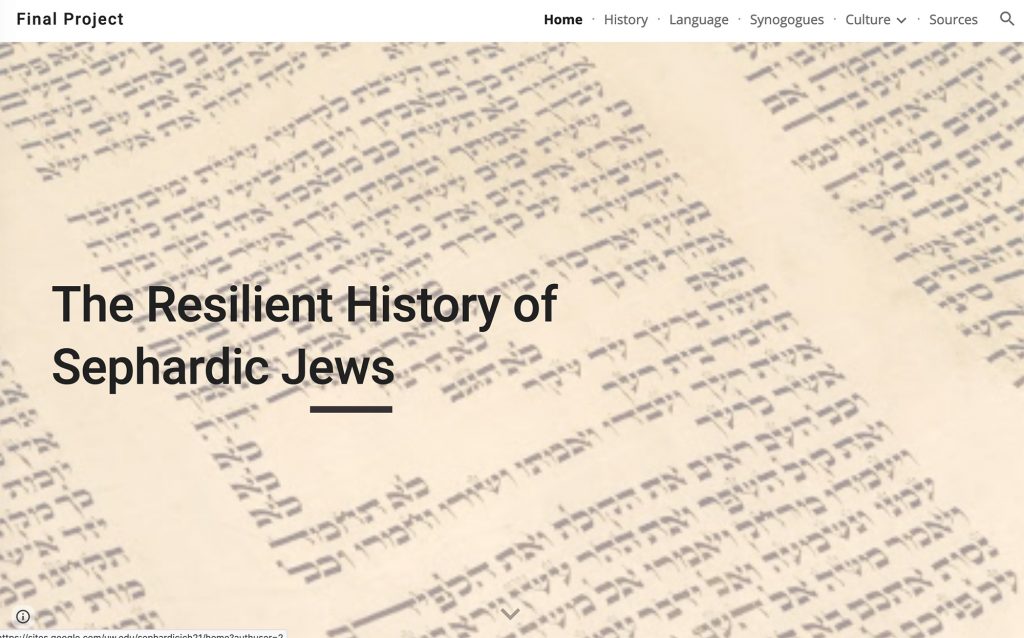 Parenting is not such a big problem if you mean by this word the following: help the child help himself, help him learn to live and play with others, carefully explore new things, deal with his feelings, develop his interests.

It’s not easy at all. There is no magic “right way.” The way in which you discipline or raise your child depends on all the characteristics with kids in Israel that set your family apart from others. Discipline is not about making your child do what you want. You cannot force a toddler to be “good”; Of course, some children, after screaming and spanking, stop doing what you don’t like to please you.

Children are most rebellious when their parents are constantly busy with their own affairs, are very stressed, or are going through difficult times. Therefore, it is important to remember that children usually repeat the behavior of their parents. And being aware of this responsibility, pay attention to how you behave, as children absorb everything like a “sponge”.

The following tips will help you navigate parenting issues.

Marissa Rackner’s interest in Sephardic and Ladino-language history came from having grown up in a Sephardic Jewish family. A first-year food systems and nutrition major from West Seattle, she focused her project on the history of the Sephardic community of Rhodes, her family’s origin point. Her website includes not only historical information but also family photos and a family recipe for pastelikos, a savory stuffed pastry. “This project allowed me to learn more about the history of my religion and the culture of my ancestors,” she said. (Note: Because of a permissions issue, this project currently requires visitors to log into a UW Google account to view it. It isn’t visible to the general public.)