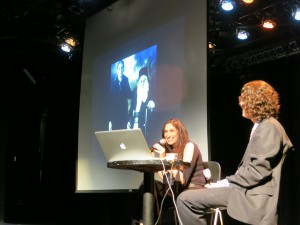 On stage: Sarah Aroeste shows a photo of her grandfather while describing her family’s story to Prof. Devin Naar.

In the middle of her spellbinding conversation-and-performance at the Ethnic Cultural Theater last Thursday night, Sarah Aroeste had a confession to make: she wasn’t always sure that starting a Ladino rock band was the right career path for her. In fact, the classically-trained opera singer had to admit, “You don’t go into the Ladino business to become rich and famous.”

Yet this singer, songwriter, and cultural activist has had a huge impact on the field of Jewish music. Now, more than a decade after her first forays into the Ladino musical world, Sarah Aroeste can claim an undeniable list of achievements: three albums, international tours, becoming a finalist in Israel’s prestigious Festiladino, and recognition as one of the central artists in the national micro-revival of Ladino culture.

Aroeste’s path to her current level of success was neither simple nor straightfoward, and as the evening continued, audience members got to hear about some of the turning points along her artistic journey. The conversational format of the event, which was the first in the Stroum Jewish Studies Program’s New Voices in World Jewish Music series, was particularly conducive to charting this artist’s development. Sarah sang, chatted with Prof. Devin Naar, played clips of Ladino musical influences, showed archival family photographs, and sang some more (to our collective delight). As a result, we not only enjoyed a relatively rare public performance of Ladino music, we also learned about Aroeste’s motivation, inspiration, and hopes for the future of Ladino culture.

As Aroeste’s repertoire demonstrates, her musical approach involves a combination of preserving the past and innovating in the present. If she feels that the traditional arrangement of a song does not match the lyrics’ sensibility, she will create her own reinterpretation, as on “La Vida do por el Raki,” an ode to alcohol typically played with a jaunty beat, but which she reimagined as a solitary, slow-burning guitar jam. 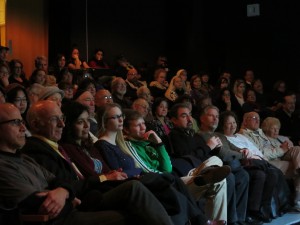 The audience at the sold-out event was captivated by the combination of story-telling and song.

Aroeste freely admitted that her contemporary spins on classical Ladino music have rankled some purists in the field. However, she is ultimately being true to her own identity as, on the one hand, the offshoot of a Sephardic family with roots in Greece and Macedonia; and, on the other hand, an American born and raised in New Jersey. The fusion of both aspects of her identity is clear in her music. Indeed, thanks to her efforts, the phrase “Ladino rock band” is no longer an oxymoron, as she once feared, but a reality on the vibrant World Music scene.

Aroeste’s latest album, Gracia, is named in honor of Dona Gracia Nasi, a special–but lesser-known–historical figure in both Jewish history specifically and Renaissance European history more broadly (click here and here to find out more). This Portuguese converso Jew wielded her wealth and power to help Jews escape the Spanish Inquisition. Aroeste decided to celebrate the courage and conviction of Dona Gracia, who is also the subject of the album’s title track, and whose mission to preserve Jewish culture during times of persecution resonates deeply with Aroeste’s own agenda to preserve Ladino culture today. (You can find out more about her process of recording and performing the album here.)

Soulful: Sarah Aroeste’s performance of Ladino songs reflected a journey into her own Sephardic and American identity.

Aroeste eloquently declares on her web site, “Ladino is not a dead language at all; it is a living, breathing, beautiful language seeped in centuries of rich heritage and culture.” Her interlocutor, Prof. Devin Naar, would be the first to agree. As he pointed out towards the end of their conversation, his Seattle Sephardic Treasures project shares Aroeste’s goal of preserving Ladino’s legacy so that future generations can learn from it and take pride in it. (No word yet on whether we will see a future collaboration between Aroeste and Naar featuring archival Ladino documents set to rock music!) By the end of the night, sitting in the multi-generational audience at this sold-out event, singing along to the foot-stomping chorus of “Gracia,” I had more than enough proof to be able to declare: Ladino rocks.

To find out more about the New Voices in World Jewish Music series, and to register for upcoming events, please visit: https://jewishstudies.washington.edu/newvoices.

All photos are by Lauren Spokane.

Want to see more articles like this?  Sign up for our newsletter!
⇒ Learn more about the Stroum Center for Jewish Studies at the University of Washington, our Sephardic Studies Program, or our Israel Studies Program.
Note: The opinions expressed by faculty and students in our publications reflect the views of the individual writer only and not those of the Stroum Center for Jewish Studies.
By Hannah Pressman|2018-02-15T07:32:32-08:00February 1st, 2013|Categories: Arts & Culture, Our Events, Sephardic Studies|Tags: Culture, Devin Naar, Ladino, Music, Sarah Aroeste, Sephardic Studies|0 Comments