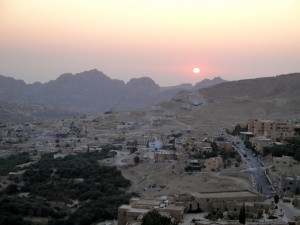 A few days before Tisha B’Av, I found myself in Amman, Jordan, in the middle of the holy month of Ramadan. I was nearing the end of a summer spent living at the American Center for Oriental Research and studying Arabic during this remarkable time for Muslims, when fasts during the day meant a quiet time for prayer and contemplation, contrasted with the lively Iftars (break fasts) and late night meals (sohour) of the nights of Ramadan. After the call to prayer at sundown, Amman came alive with celebration and the sounds, tastes, and smells of families enjoying time together.

I was an observer to Ramadan. I did not fast during the day, but respected my hosts by not eating or drinking in public. With many of my colleagues, I almost guiltily enjoyed the delights of sohour, understanding that I had missed a pleasure by not fasting and praying. My eclectic mix of friends, including expats from the States together with Jordanian and Palestinian friends, mostly frequented a restaurant in the Wast Al-Balad (downtown) for plates of hummus, hot falafel, and sweet cups of tea with mint served in delicate glass teacups.

Later, we would head up to Amman’s Roman Ampitheater with cones of Arabic ice cream (an incredible mix of pistachio, fruit, and gum flavor) and watch the souks and shops awaken for the nights of Ramadan in the Wast Al-Balad below.

But the traveler grows weary and one night, towards the end of my stay in Jordan, my Hebrew Calendar popped up with an alert for Tisha B’Av.

As a Jewish girl in the Middle East, I had spent the majority of my time in Jordan “passing.” “Sarah – an Arabic name!” the cab drivers, waiters, and shop owners would tell me. I would agree and steer the conversation safely toward their own personal narratives.
That night, seeking comfort in the virtual connection with friends at home, I posted on Facebook: “I’m just a lonely Jew on….Ramadan.”

Immediately, friends began to chime in: “Chinese Food! Movies!” “Seinfield!” “Go watch Harry Potter dubbed in Arabic!” However, one post, from one of my closest friends in Amman, Mohammad, was especially exciting: “there is a Chinese restaurant off of Share’a Rainbow, and it has an interesting story.”

Soon arrangements were made to break my fast for Tisha B’Av with Mohammad, who would have his Iftar at the same meal. The restaurant, Al-Mataam Al-Sini (“The Chinese Restaurant”), served up fine halal kung pao chicken, hot and sour soup, and fried rice. Even the owner could not escape the historical and political serendipity of the meal. Peter Kwai was born in Taiwan, served in China as an air force cadet, and ended up in Amman at the moment when Jordan switched political allegiances and recognized Peking over Taipei. After a conversation with Crown Prince Ghassan, Kwai opened the restaurant in 1975 in the trendy hills above downtown, home to Amman’s artists, musicians, and young intelligentsia. 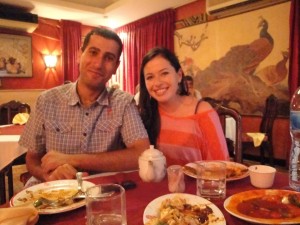 Scene from a Chinese restaurant: Mohammad and the author at the Mataam Al-Sini in Amman, Jordan.

In our travels there are moments that give us pause, that force us to reflect on our own positionality. There I was, two hours from Jerusalem, nearing the end of my stay in Amman, and just a few days away from the start of a two-week holiday in Spain. The purpose of my fast that day was to meditate on the tragedies of the Jewish people that happened to occur on the ninth day of the Hebrew month of Av– the destruction of both Temples in Jerusalem (655 years apart), and the expulsion of the Jews from Spain. As with many Jews in the Diaspora, my own family’s recent history was interrupted with further loss, thanks to the catastrophic events in Eastern Europe, and this fast day was meant to remember and reexamine that history as well.

But what of Mohammad’s narrative? Born in Jordan, min-asl Filistini (of Palestinian descent, something you hear repeatedly in Jordan, home to almost 2 million Palestinian refugees), he lived in Kuwait until 1991, when the Palestinians were expelled by Saddam Hussein. He and his family returned to Jordan, but Mohammad went on to pursue graduate degrees from British and American universities and, later, to hold a fellowship in Israel and live and work on a kibbutz. One of the most striking anecdotes Mohammad shared with me recalled a visit to a popular café in Amman, which I myself frequented until hearing this story, and his staunch refusal to patronize the place after a friend of his was denied entry because he was Jewish (wearing a kippah).

It may not surprise you to hear that no solutions for the peace process were offered that night. What that unusual Tisha B’Av / Ramadan break fast did achieve, though, was to force me to think more deeply about my own place in the world and to consider which historical contingencies had made this particular meal, and indeed all my interactions, possible. Several significant events of the last century directly or indirectly led up to this one meal: Israeli Independence, the Chinese Revolution, and the Gulf War, to name but three. Academia (where I find my professional home) has a way of detaching what we learn from our daily lives, but that savory Chinese dinner in Amman was a critical reminder for this young historian of the impact of history–writ large–upon human experience–writ small.

Want to see more articles like this?  Sign up for our newsletter!
⇒ Learn more about the Stroum Center for Jewish Studies at the University of Washington, our Sephardic Studies Program, or our Israel Studies Program.
Note: The opinions expressed by faculty and students in our publications reflect the views of the individual writer only and not those of the Stroum Center for Jewish Studies.
By Sarah Zaides|2017-09-04T22:43:00-07:00March 3rd, 2012|Categories: Personal History|Tags: Food, Sarah Zaides|0 Comments