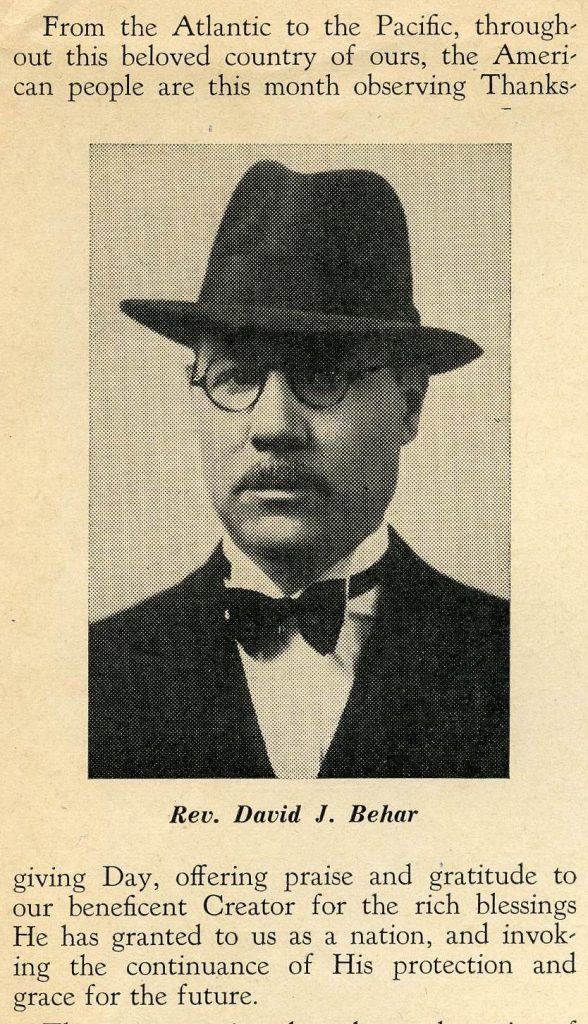 Photo and portion of an article titled “Thanksgiving and the Jew,” written by Behar for The Clarion, a newsletter published by Congregation Ezra Bessaroth. This issue was from November 1944 (ST01748, courtesy Victor Barkey via Michael Behar).

Few synthesized their dedication to Sephardic Judaism and American patriotism like Reverend David J. Behar. He was born in Beirut, Lebanon in 1894, then a part of the Ottoman Empire. Though he worked as a tailor, Behar was raised in the Sephardic tradition with comprehensive education in Jewish religious life and liturgy, and the synagogue was central to his daily life.

Behar’s older brother got married on a business trip to Rhodes. He, in turn, introduced David to his wife’s relative: Buena Lea Scharhon. Buena Lea was born on May 22, 1892, on the Island of Rhodes. Her father was a community leader, and she was extraordinarily well-educated: Buena Lea could read and write in Turkish, Greek, Ladino, and Hebrew.

Soon after hearing about her, Behar took a trip to Rhodes to meet Buena Lea. The two took a liking to each other. After a long courtship facilitated by their written correspondence, they became engaged and were married in Beirut on August 29, 1913.

During World War I, the couple immigrated to Seattle, Washington. There, Behar served as the hazan (cantor) and rabbi of Congregation Ezra Bessaroth for nearly sixty years, where he referred to by Sepharadim as haham, but otherwise, like other American clergy, as “reverend.” Dedicated to his adoptive homeland, Behar helped many Ladino-speaking immigrants obtain American citizenship and also accompanied many community members to the polls on election day.

The Behar’s had eleven children, including Elazar Behar (1923-2016). While in the real estate business, Elazar dedicated himself to Ezra Bessaroth, serving in the choir, as president, and as the gabbai (sexton) for forty-eight years. The Behar family library is among the most extensive and significant Sephardic collections in Seattle. Reverend Behar’s grandsons, David E. Behar and Michael Behar, have graciously shared many artifacts from their family’s collection, as well as from the Congregation Ezra Bessaroth library. 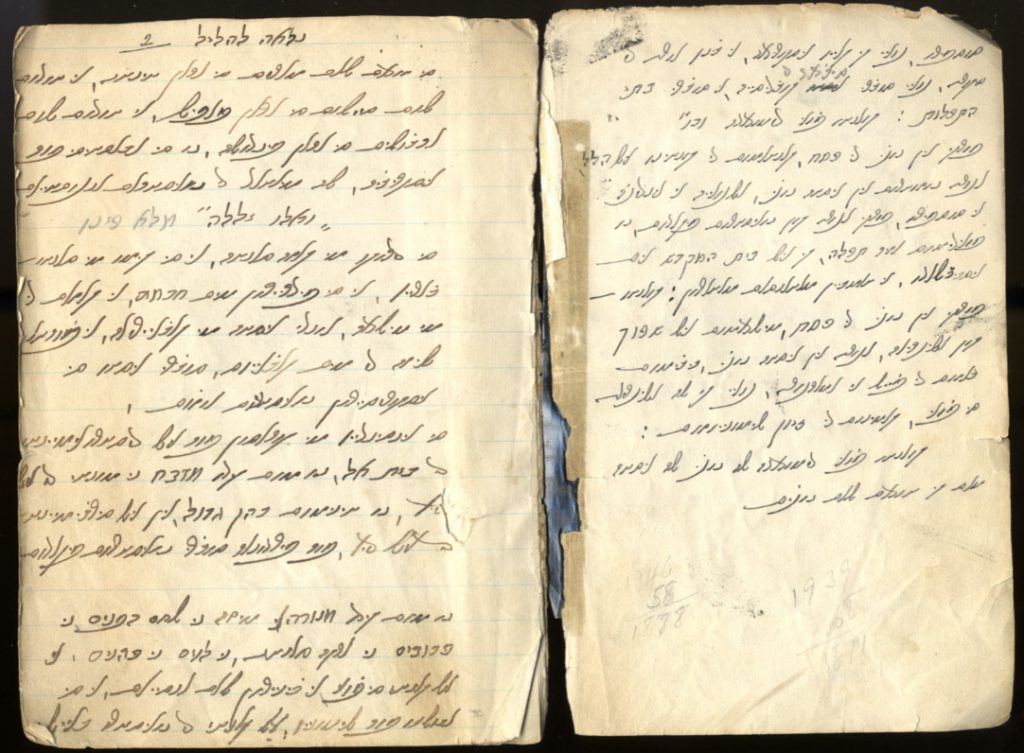 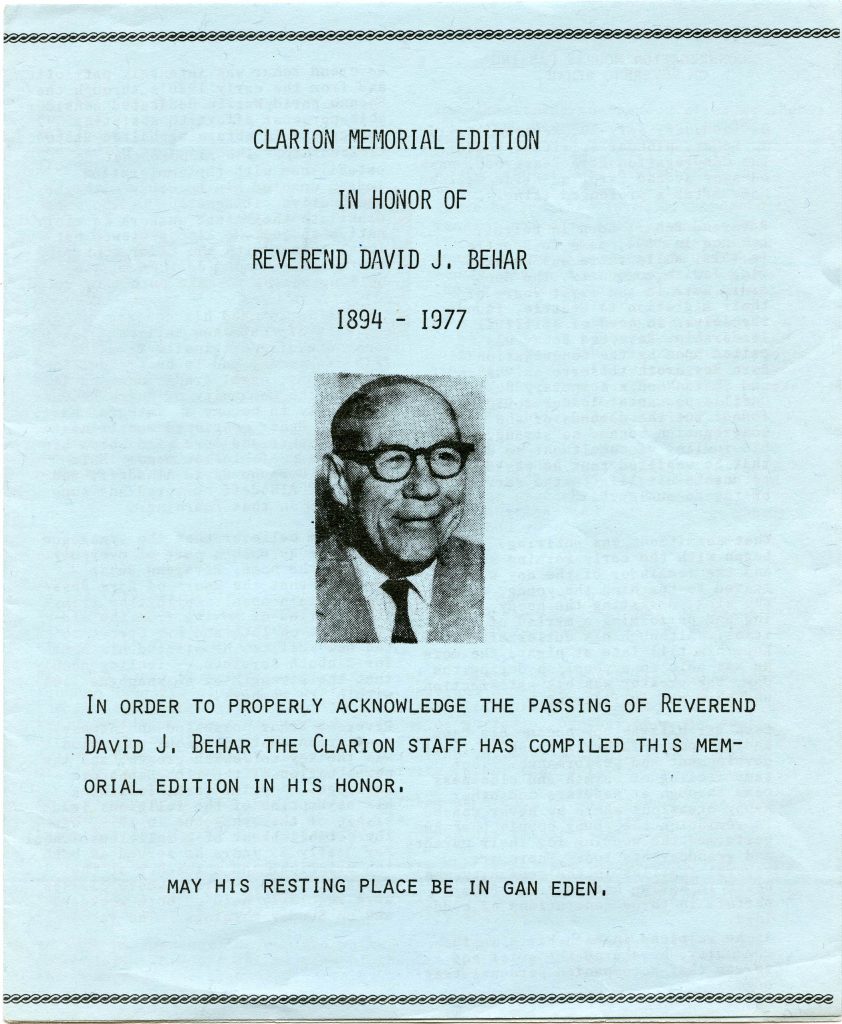 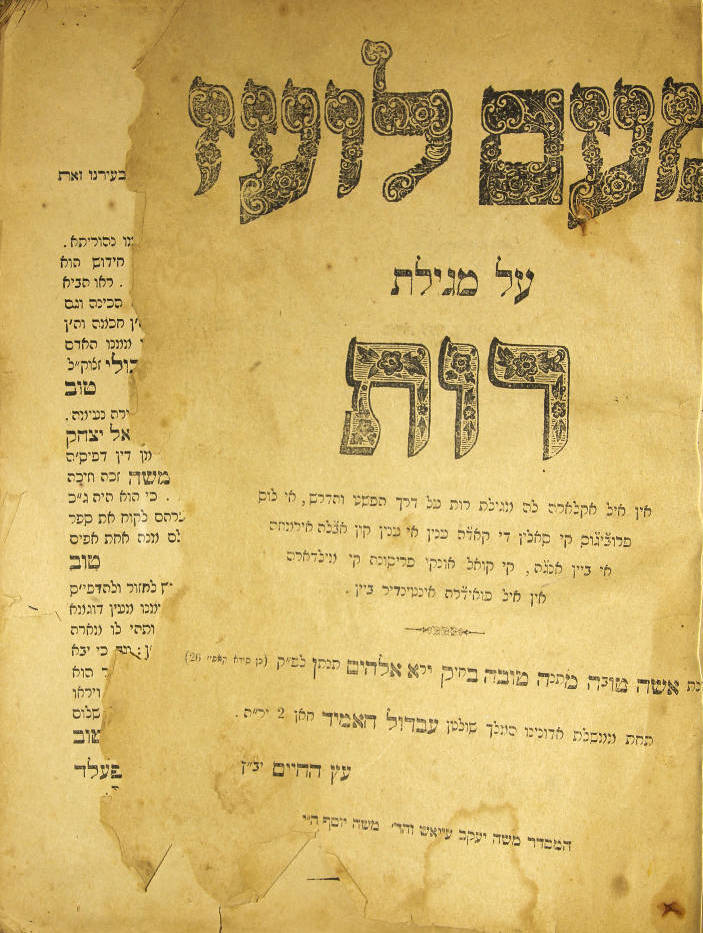 Title page from a volume of the most famous work of Ladino literature, the Me-am Lo’ez, an encyclopedic commentary on the Hebrew Bible and compilation of Jewish traditions. This edition focuses on the Book of Ruth and was published in Salonica in 1881 (ST0258, courtesy Elazar Behar). View the entire book here >

Title page of Ladino songbook for the High Holidays, “Los piyyutim,” printed in Istanbul in 1927. Behar’s signature is in the top margin (ST00223, courtesy Elazar Behar).