Jews in America have celebrated Thanksgiving from the beginning—Sephardic Jews included. When President George Washington initiated an official day of thanksgiving in 1789, Congregation Shearith Israel, the Spanish and Portuguese synagogue in New York (established in 1654), answered the call by integrating Jewish prayers—namely, selections from Hallel—into its Thanksgiving celebration. Over the generations, Thanksgiving became a universal American holiday with the capacity to unite Ashkenazim and Sephardim, Jews and non-Jews. Such was the case in Seattle. 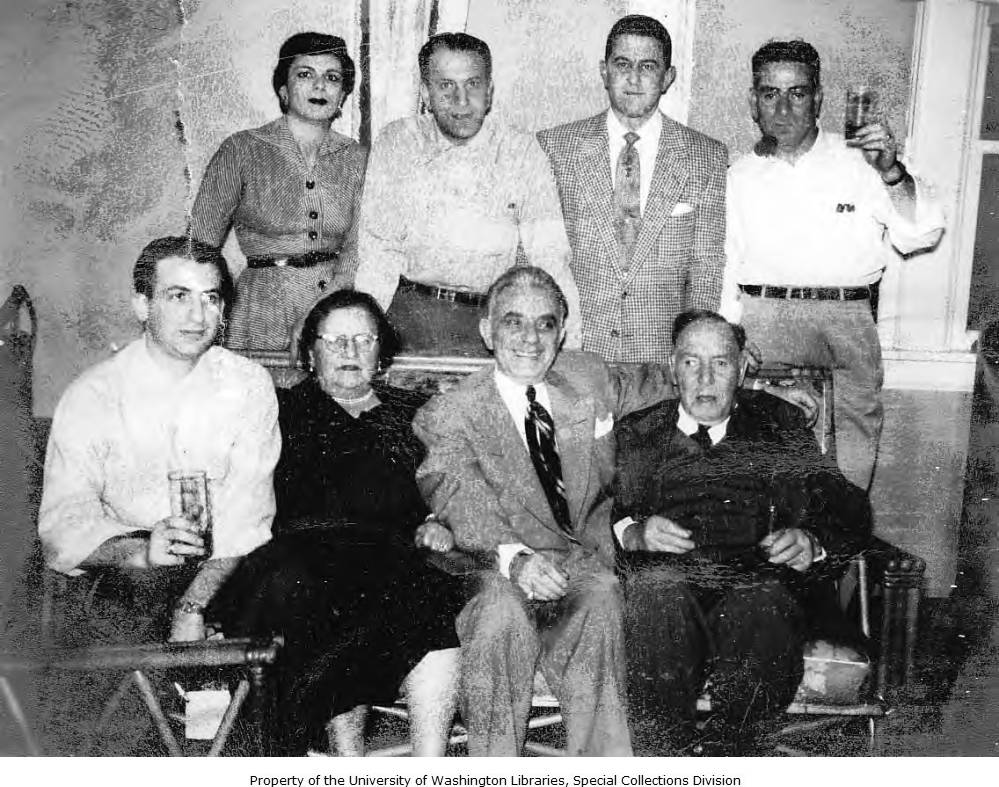 The story of Thanksgiving among Jews in Seattle during the first half of the twentieth century involves the close cooperation between the long-established Reform congregation, Temple De Hirsch, and the two Sephardic congregations, Ezra Bessaroth and Sephardic Bikur Holim. While a number of tensions had characterized the relationships between Ashkenazim and Sephardim in Seattle as elsewhere in the United States, Thanksgiving became a holiday where Jews of all kinds could come together to rejoice in their Jewishness and, especially important for immigrants, their newfound status as residents—if not citizens—of the United States.

Rabbi Samuel Koch, the senior rabbi of Temple De Hirsch (from 1906 to 1942), organized an annual Union Thanksgiving that sought to bring together Seattle’s Ashkenazim and Sephardim. The Jewish Transcript often commented on the success of the resulting “union services.” More significantly, Sephardic leaders also viewed the holiday as a key moment not only for expressions of American patriotism but also of Jewish unity. Henry Benezra, a past president of Sephardic Bikur Holim, vividly remembered visiting Temple De Hirsch for the community-wide Thanksgiving services that brought together not only Jews and non-Jews, but also during which special recognition of the Sephardic congregations was made:

“That Thanksgiving Day was the day that we thought united the whole community. That is, the Jewish and non-Jewish community together. I used to get a lot of joy out of listening to him [Koch]. He would take cognizance of the Sephardic community. He would mention Sephardic Bikur Holim and Ezra Bessaroth. In sermons or in his speech I knew that he was taking cognizance of us. We’d appreciate it.” 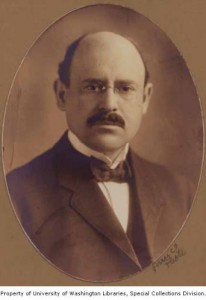 Rabbi Samuel Koch of Temple De Hirsch, (Courtesy of the WSJHS collection at the University of Washington Digital Collections)

In an article published in the congregation’s “Temple Tidings,” (March 28, April 4, 1935), Rabbi Koch reflected on the cordial relationship between the Sephardim and his own members, pointing to the Thanksgiving Day services as an excellent example of the cooperation between different groups of Jews:

“A Union of Thanksgiving Service, participated in by non-Jews and Jews might have been gotten under way easily. But the Temple De Hirsch thought it would be a beautiful spectacle of brethren dwelling together in unity if all Jews could be got together for observance of this National Day of Thanksgiving. Though many organizations cooperate in the service from year to year, the Ezra Bessaroth Congregation as representing the Sephardic Jews is the only congregation in the community which has cooperated without fail every year and has evinced an interest which has not been satisfied with just having its name on the program but whose members have always been present to a reasonable degree. This earliest and most continuously persistent endeavor to secure a United Synagogal participation in the observance of National Thanksgiving Day quite evidently has had the endorsement of our Sephardic Jews.” [Quoted in Albert Adatto’s Masters Thesis “Sephardim and the Seattle Sephardic Community of Seattle,” University of Washington, 1939.]

Congregation Ezra Bessaroth seems to have taken a particularly active role in promoting Thanksgiving. By the 1930s, as many of the congregation’s members had already lived in the United States for a few decades and some had acquired American citizenship, the celebration of Thanksgiving took on increasing significance as a marker of integration into American society. In fact, in 1931, Congregation Ezra Bessaroth began to hold its own annual Thanksgiving banquet. Such Thanksgiving services or dinners often involved patriotic or political themes. At the 1934 Thanksgiving dinner, for example, a speech was delivered titled “Hitler over Europe” as indicated in an edition of the Seattle newsletter, Progress, published by a now defunct Sephardic organization, the Shalom Alehem society.

In the tense context of World War II, Thanksgiving took on an additional layer of patriotic symbolism. In 1944, as reported in the Jewish Transcript, both Ezra Bessaroth and Sephardic Bikur Holim held Thanksgiving services and invited local judges and politicians to deliver speeches. 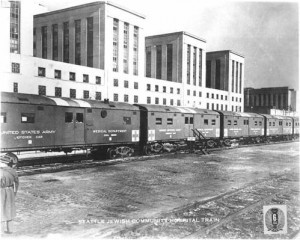 Rabbi Solomon Maimon, the fist Sephardic rabbi ordained in the United States, then in his first year at the pulpit of Sephardic Bikur Holim, directed the Thanksgiving services, which included Congressman Hugh DeLacy as the featured speaker. The event was followed by the Seattle Jewish community’s sixth War Loan Drive which raised at total of $4,159,700 to purchase two trains named The Seattle Jewish Community Hospital Trains. Through Rabbi Maimon’s leadership, Sephardic Bikur Holim purchased two cars, one on each train, which where then used in combat zones to carry wounded soldiers.

At Ezra Bessaroth’s Thanksgiving service in 1944, Judge Lloyd Black gave an address along with one of the congregation’s own members, Lieutenant Solomon DeLeon of the Army Air Corps, who was visiting Seattle after having completed 35 bombing missions over Germany. Afterwards, Rabbi Isidore Kahan hosted a celebration in appreciation that he and his family had recently attained their American citizenship just two months prior. 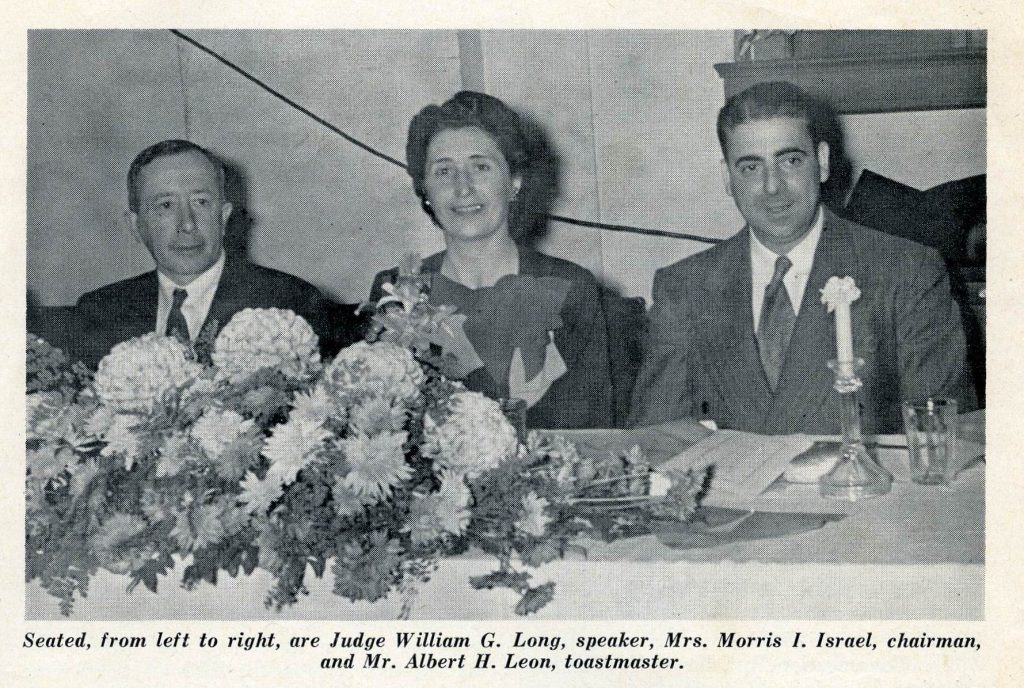 Great preparations were made to hold these services and banquets as we can see from this event program for the Thirteenth Annual Thanksgiving Banquet of the Congregation Ezra Bessaroth Ladies Auxiliary, now digitized in the Sephardic Studies Digital Library. The congregation’s Ladies Auxiliary organized the banquet, which was held on Sunday, November 26th, 1944 at the Seattle Talmud Torah, on 25th Ave. and Columbia Street. The evening began with a salute to the flag by the Boy Scouts of America and featured benedictions led by Rev. David J. Behar and Rabbi Kahan. The main speaker was Judge William George Long who is considered the “father” of the King County Metropolitan Youth Commission, serving on the King County Juvenile and Superior Court from 1940-1970. 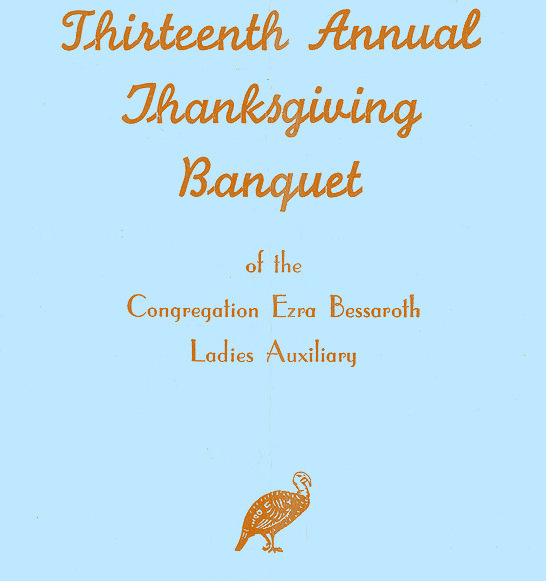 As we can see, Sephardic Jews heartily adopted Thanksgiving as a day of national pride. Perhaps as interesting, in celebrating a national holiday like Thanksgiving, Sephardic Jews were replicating some of the patriotic practices they had established in the old world. Jewish communities in the Ottoman Empire, for example, celebrated both the birthday and the day of ascension to the throne of the sultan in grand fashion.

For Sephardic Jewish immigrants in America—both men and women—Thanksgiving provided them with the opportunity to express both their deep sense of national pride and their gratitude to the freedoms they obtained in their new country. In Seattle this was the result of their own initiative and their relationship with the Reform Jewish congregation, which took the newcomers under its wing, and their own historical precedents in the Ottoman Empire.

Want to see more articles like this?  Sign up for our newsletter!
⇒ Learn more about the Stroum Center for Jewish Studies at the University of Washington, our Sephardic Studies Program, or our Israel Studies Program.
Note: The opinions expressed by faculty and students in our publications reflect the views of the individual writer only and not those of the Stroum Center for Jewish Studies.
By Ty Alhadeff|2021-11-29T15:59:43-08:00November 24th, 2016|Categories: Digital Sephardic Treasures, Sephardic Studies|Tags: American Jewish Community, Devin Naar, Seattle, Sephardic Studies, Ty Alhadeff|0 Comments