“Here it is so different. It’s like coming from hell to heaven.” — Rabbi Dr. Isidore Kahan in the Seattle Post Intelligencer on May 1, 1939. 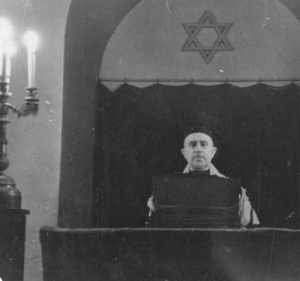 Rabbi Isidore Kahan at Sephardic Bikur Cholim, Seattle 1939, courtesy of the WSJHS collection at the University of Washington Digital Collections.

As the vise around the Jews in Europe tightened, and Mussolini’s fascist laws placed restrictions on the lives of Jews in Italy and Rhodes in 1938, Seattle’s Sephardic community was determined to go “on the warpath every hour” to help their brothers across the sea. A front-page story from Seattle’s local Jewish Transcript (January 13, 1939) describes the emotional atmosphere at Congregation Ezra Bessaroth, where hundreds gathered to share letters from their relatives, each of which revealed “a situation so desperate as to defy description.” According to the Transcript, “audible sighs and sobs” erupted from the audience, as tears filled the eyes of every man, woman and child in the synagogue. The Sephardic Jews in Seattle, who had come from Turkey and the Island of Rhodes decades prior, raised $6,000 to assist the plight of Sephardic refugees fleeing Mussolini’s rule. One of the results of this meeting was the safe arrival of Rabbi Dr. Isidore Kahan, his wife, Toni, and their young daughters, Judith and Naomi to the Pacific Northwest.

Interestingly, Kahan was not originally from Rhodes. Rather, he was born in Tiszabercel, Hungary, on August 24, 1887. He studied under many rabbis throughout Europe, receiving at least five letters of recommendation from his teachers, including Rabbis Yehuda Greenwald, Yitzhak Yaakov Wiess, Leib Friedman, Yehuda Grunfeld, and from the famous Pressburg Yeshiva written on the official letterhead and sealed with the stamp of Rabbi Akiva Sofer (1878-1959). (This famous Hungarian rabbinical academy was later reestablished in 1940 and remains one of the leading yeshivot in Jerusalem today.)

In order to avoid conscription in the Austro-Hungarian army, Kahan relocated to Switzerland and studied law at the University of Zurich, receiving his doctorate in 1921, supervised by Dr. Rudolf Fueter, for his dissertation, “The Offense of Dealing in Stolen Property and its Treatment in the Future Swiss Criminal Law.” Notably, the subject of Kahan’s research was completely secular rather than rabbinical, indicating his level of comfort and mastery of general European jurisprudence. After meeting his wife, Frankfurter Antoniette

[Toni] Buchbinder, the newlywed couple soon moved to Italy, where Kahan served as the rabbi of the small Jewish community of Gorizia. Kahan spoke German, Hebrew, and Hungarian and quickly learned Italian. 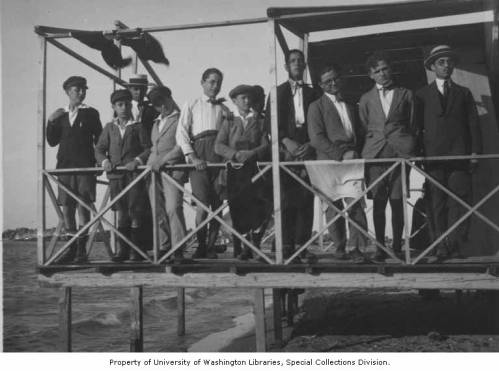 Students of the Rabbinical College of the Island of Rhodes, ca. 1933, courtesy of the WSJHS archive at the University of Washington, Special Collections Division.

In December 1928, Rhodes’ governor Mario Lago established the Collegio Rabbinico. Mussolini personally intervened to ensure that funds directed to the seminary in Rome went to Rhodes in order to spread Italianità, Italian culture, to the Italian colonies and even among Jews. Within months, Rabbi Kahan was recruited by the Italian government to be the administrator and head teacher of the Rhodes seminary, a decision that raises a number of intriguing, unanswered questions, such as: why was a Hungarian native selected for such a task?

The school educated approximately 25 to 30 students who came from Izmir, Aleppo, Beruit, Sarejevo, Cairo and Ethiopia to study in this modern yeshiva. According to the research of Rabbi Dr. Marc D. Angel in his pioneering study, Voices in Exile, “Rabbinical students were expected to gain a mastery of the Bible and its commentaries, Hebrew language and grammar, Talmud, codes of Jewish law, Jewish history, Hebrew literature and religious philosophy. Candidates were given oral examinations and were required to write a dissertation. Beyond the requirements in Jewish studies, students were obligated to study secular subjects under Italian professors. The Rabbinical College of Rhodes was accredited by the Italian government and was required to meet all of the academic standards for state schools.”

In April 1932, the last Grand Rabbi of Rhodes,the eminent HaRibi Reuben Eliyahu Israel, whose family had maintained a rabbinical dynasty on the island since 1714, bestowed rabbinic ordination upon Rabbi Azriel Yehuda ha-Kohen [Isidore Kahan] of Tiszabercel. This Teudat Rabbanut, or certificate of ordination, is now part of the Sephardic Studies Digital Library collection at UW. In it, HaRibi Reuben speaks of Kahan in glowing terms:

“Since he was a rabbi and a righteous teacher many years in the city of Gorizia, which is in Italy, and he was recruited here, and they placed upon him the crown of administrator and head teacher of the Bet Midrash for rabbis which is here. During the four years which he served faithfully in his position, this [he did] with the awe of Hashem [God] before him, he demonstrated his might and his power in the wisdom of the Torah and in his expertise in Shas, and in the legal decisions of Jewish law and in the additional [matters] of his profession of the Torah and his works and wisdom is known in his strengths in precise study of the Talmud.” 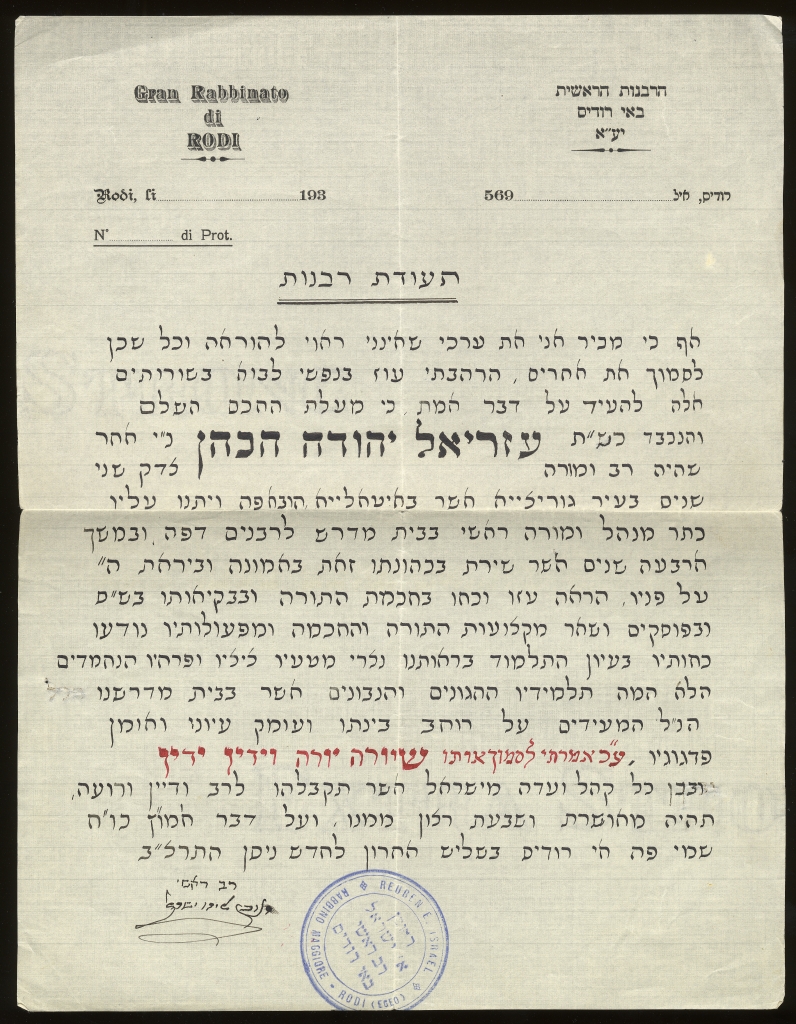 Kahan served in the Rhodes seminary until 1933, when he was hired as a rabbi and professor at the Italian Rabbinical College in Rome, where he taught history, Mishna, Rashi and advanced classes in Talmud. However, as the tide in Europe turned, Kahan worked tirelessly to save his family from impending doom. In a desperate letter to Rabbi Dr. Leo Jung, one of the major figures in Orthodox Judaism in the United States, Kahan describes the strain imposed upon his life after the many months of curfews and restrictions placed upon the Jews in Rome. “Under the present conditions, the very foundations of my existence are seriously threatened.” He concludes, “I would be sincerely grateful to you, if you would have me in mind for any pulpit being available even if it were in an Ashkenazic congregation.” Such a plea indicates that even though he was of Ashkenazi background from Hungary, by this time, given his experience in Rhodes and Rome, Kahan felt more comfortable in the Sephardic milieu.

Plans for the arrival of the Kahan family were announced in the pages of the Jewish Transcript in February 1939. The article “New Rabbi for Sephardic Jews” explained that the two synagogues “have united and will amalgamate in their support of the new rabbi and his mission in this city.” Three months later, the Transcript reported that the steps taken by the two Sephardic congregations to share a rabbi was a “forerunner of the eventual amalgamation of the general activities of all Sephardic groups in this city.”

On March 9th, 1939, tickets were issued for Rabbi and Mrs. Kahan and their two daughters to set sail from Napoli to New York. Three weeks later, Kahan received a letter from Sam Baruch on behalf of Seattle’s Bikur Holim Ahavath Ahim Congregation expressing the community’s excitement for his arrival. Baruch asked that Kahan send regards to Dr. David de Sola Pool, “who, after all, is directly responsible for the privilege and honor that our Community is about to experience in having you to look upon for their very much needed spiritual guidance.” As the famed reverend of Congregation Shearith Israel, the Spanish and Portuguese Synagogue in New York, De Sola Pool played an important role in orchestrating the arrival of Sephardic Jews fleeing Europe.

At the train station in Seattle, many members of the local Sephardic community greeted the Kahan family. A fully furnished home was provided for the new arrivals, and according to Toni Kahan, they were invited to the homes of all of the local families for holiday and Sabbath meals. The Jewish Transcript covered their arrival with an article entitled “Sephardic Rabbi Kahan Greeted At Banquet by 500 Enthusiasts.” The banquet was held at the Talmud Torah, the local Sephardic school, and included speeches from Sephardic Bikur Holim president Sam Baruch, Ezra Bessaroth president Dr. Harry Tarica, Reverend David J. Behar, and rabbis from all of the local Ashkenazi synagogues.

“We were lucky to be here, otherwise we would have ended up in a concentration camp,” recalled Toni Kahan in an oral history interview with the Washington State Jewish Historical Society. “All those years were not normal times, let’s face it. It was very revolutionary with Hitler, with Mussolini, and World War II, it was not normal times for the whole world, really, it was a bad time…You don’t consider it a normal life to go from Germany to Italy, from Italy to Rhodes from Rhodes to Rome and from Rome to the States.”

The family was warmly received, but the attempt to share the rabbi and to merge the Sephardic congregations soon proved untenable. Kahan served with distinction as the rabbi of the Rhodesli congregation, Ezra Bessaroth, until he retired in 1959, passing away in 1961. Two articles written by Rabbi Kahan from Congregation Ezra Bessaroth publications are now included in the Sephardic Studies Digital Library. These pamphlets from September 1943 and February 1945 were printed by Joe Souriano’s Columbia Printing Co.

In the first pamphlet, Kahan sought to inspire his community to start living a life of purpose and meaning in the New Year (Rosh Hashanah) while comforting those families whose sons were fighting in the Second World War. He concluded with the hope that all his community’s service men would return home safely to Seattle. In the second pamphlet, Kahan encouraged his congregation not to despair even in the face of the reign of anti-Semitic tyrants in his article “Lesson of Purim: Let us be prepared.” Like other rabbis of his era and since, Kahan taught that his own generation faced modern Hamans–Hitler and Mussolini–but that eventually, divine providence would intervene and brave Jewish men and women, like Mordechai and Esther, would eventually rescue the people of Israel. 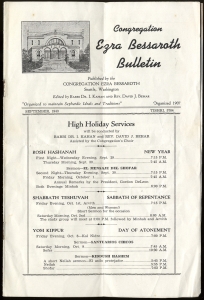 In Seattle, Rabbi Kahan also published two prayer books in 1947: “Service for the Eve of Shabbat “and “Service for the Eve of Rosh Hashanah.” As he explained in the book’s foreword, “The Hebrew words, which are presented in Latin characters herein, follow exactly the original, with the vowels and construction in the Spanish pronunciation to which we are accustomed.” Kahan was concerned that the younger generation was unable to follow the rapid reading of the Hazan–and may not have been familiar enough with Hebrew to follow along at all–and hoped that this booklet would inspire the younger generation and increase participation in the synagogue services.

The UW Sephardic Studies Program is grateful to Rabbi Kahan’s daughter, Naomi Strauss, for contributing her father’s personal documents to the Sephardic Studies Digital Library. Anne LeVant Prahl, curator of the OJMCHE (Oregon Jewish Museum and Center for Holocaust Education) kindly arranged for Ms. Straus to send us her father’s documents.  Among these life-saving treasures are Kahan’s many rabbinic and academic credentials, together with all of the family’s visas and other travel documents that ensured their safe arrival to their new country. We look forward to sharing the works of Rabbi Reuben Eliyahu Israel, the last Grand Rabbi of Rhodes; some of his relatives, like Rabbi Kahan, also found safe haven in “SettleVash,” as Seattle, Washington was pronounced among many of these Sephardic immigrants.”

Want to see more articles like this?  Sign up for our newsletter!
⇒ Learn more about the Stroum Center for Jewish Studies at the University of Washington, our Sephardic Studies Program, or our Israel Studies Program.
Note: The opinions expressed by faculty and students in our publications reflect the views of the individual writer only and not those of the Stroum Center for Jewish Studies.
By Ty Alhadeff|2019-05-30T23:07:53-07:00February 11th, 2016|Categories: Digital Sephardic Treasures, Sephardic Studies|Tags: American Jewish Community, Devin Naar, Holocaust, Ladino, Seattle, Sephardic, Ty Alhadeff|3 Comments