Had Gadya in Ladino: A Sephardic Passover Tradition? 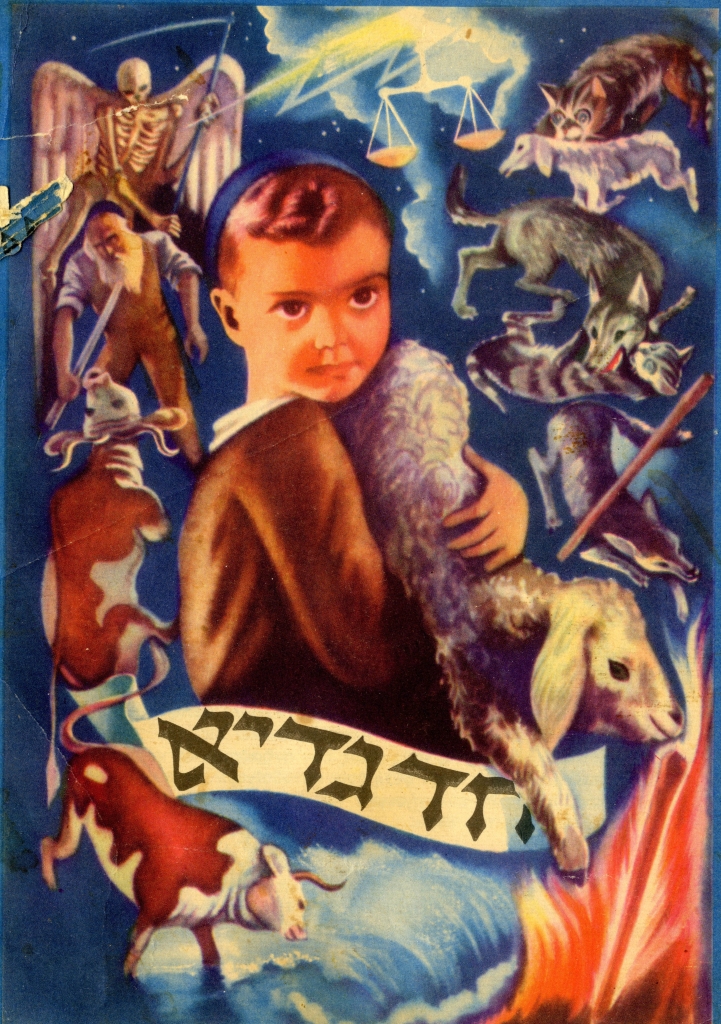 Illustration of the characters in the Had Gadya song as depicted in a multilingual Hebrew/Aramaic, Ladino, and Greek Haggadah published in Salonica, 1955. (Courtesy of Deb Henigson, Mountain View, CA)

If you make it to the end of your seder, you might have the pleasure of singing the Passover song, Had Gadya, a playful Aramaic tune about the fate of a little goat that has brought smiles to children across the generations. After the fourth glass of wine, it may be just as fun for adults, too. While well-known in America, and sung in nearly every language that Jews have spoken over their long history, we encounter a tension over the place of the song in Sephardic tradition. Many Sephardic Jews, including here in Seattle, recall singing the song, in Ladino, since their youth and see it as the traditional conclusion to the seder. But authoritative scholarly works such as the Encyclopedia Judaica indicate that Had Gadya “was never part of the Sephardi or Yemenite rituals.” So which is it?

To a certain extent, both may be correct. Exemplars of the Passover Haggadah (or aggadá as traditionally pronounced among Sephardim), the booklet that presents the order of the Passover seder, that are housed in the Sephardic Studies Digital Library and Museum at the University of Washington, help us answer the question. Our Haggadot make very clear that Had Gadya, in Ladino, known varyingly as Un kavretiko or Un kavrito, has indeed been part of the Sephardic tradition—but for how long?

The origins of Had Gadya are obscure. Scholars suggest it initially may not have been connected to Passover but rather formed part of a broader tradition of European folk songs, including Mother Goose’s nursery rhymes. Possibly inspired by a Talmudic midrash (Bereshit Rabbah 38), Had Gadya was first published in the Prague Haggadah (1590). But older versions of the text exist in manuscript, in both Aramaic and Yiddish, from the fifteenth century. This kind of evidence suggests that the roots of the song and its inclusion in the Haggadah stem from the world of Ashkenazic Jewry. While the famous eighteenth-century Jerusalem-born Sephardic rabbi, Haim Yosef David Azulai (the Hida), was aware of the existence of Had Gadya, he associated the song specifically with the “Jews of Poland and Ashkenaz.”

While the origins of Had Gadya remain mysterious, the meaning of the song is equally contested. Some see it as a quaint, even frivolous children’s ditty intended to keep kids awake until the end of the seder, but the violent lyrics involving animals attacking each other or being slaughtered led other commentators to emphasize a deeper, allegorical meaning: the “little goat” stands in for the Jewish people. And, as the standard lyrics progress, the other characters that overtake each other in succession–-a cat, a dog, a stick, fire, water, an ox, a ritual slaughterer, and the angel of death—represent the oppressors of the Jewish people, from the Egyptians, to the Babylonians, the Persians, the Greeks, the Romans, the Christians, etc. Redemption comes only at the end, when God enters and destroys the angel of death. This kind of interpretation could encapsulate the entire Passover story about the oppression and ultimate liberation of Jews by the hand of God.

With fuzzy origins and multiple interpretations, Had Gadya appears to have finally made it into select Sephardic haggadot in nineteenth century. Bi-lingual Hebrew-Ladino haggadot in the Sephardic Studies Collection from Livorno (1866 and 1876) do include Had Gadya, but only in Aramaic, whereas an 1855 Ladino-Hebrew Haggadah from Vienna does not include the song in any language.

It seems that Ladino translations of Had Gadya only began to appear in Sephardic haggadot at the end of the nineteenth century. It’s not as if Ladino was absent from Sephardic haggadot; to the contrary, the main text of the haggadah had appeared in Ladino translation in numerous editions since the sixteenth century and this was the case in the previously mentioned haggadot from 1855, 1866, and 1876.

Finally, in 1894, a Haggadah published in Salonica included a Ladino translation of Had Gadya and mentions this noteworthy fact on the front cover:

The order of the haggadah for the night of Passover

[with] the full seder for the night and we included the liturgical poem of Had Gadya.

The clear implication is that the inclusion of Had Gayda in Ladino was a novelty for Salonica’s Jews in 1894 and one worthy of being highlighted by the publishers on the title page. 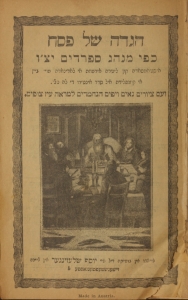 Passover Haggadah according to the customs of the Sephardim, published by Joseph Schlesinger, Vienna, c. 1900.

A Haggadah shel Pesah published shortly thereafter, in 1897, by the Schlesinger printing house in Vienna, similarly included Had Gadya in Ladino. One difference was that the title page of this edition did not advertise the song. The other noteworthy difference is that while the rest of the Ladino translations in the Schlesinger Haggadah include vowel points (nekudot) to make reading easier, Un Kavrito is one of the only passages that does not include the nekudot. Both of these clues—the absence of an ad for the song, and its printing without nekudot—could suggest that the publishers anticipated that readers would be more familiar with Un Kavrito, perhaps even expecting to find it in the booklet.

Even if Ladino versions of Had Gadya were becoming more recognized at the turn of the century, they did not immediately catch on everywhere, es evidenced by two other haggadot in the UW Sephardic Studies Collection. In 1903, an illustrated Haggadah “with a translation into the Sephardic language” (im pitron be-lashon sefaradi) published in Livorno by Shelomo Belforte included Ladino translations of the Passover story and explications of the symbols of the seder plate. In a final section called “Piyutim for after the haggadah,” it indeed included Had Gadya—but in Aramaic only! The same is true for a Ladino-Hebrew haggadah published in New York in 1918 by the Ladino journalist Moise Gadol.

The Vienna Haggadah may serve as the linchpin in the story of how Ladino versions of Hag Gadya became increasingly widespread in the twentieth century. Vienna was a major printing center not only for Jews, but also for Greeks and Armenians from the Ottoman Empire who could more easily publish in the Habsburg capital than under the strict censors of the Ottoman sultan. Not only the bilingual Ladino-Hebrew Haggadah, but also weekly and High Holiday prayer books published by Schlesinger in Vienna became popular among Ottoman Jews, advertised in Ladino newspapers from Istanbul and Salonica to New York. 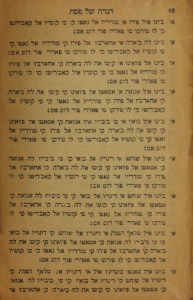 Had Gayda in Ladino from the Schlesinger Haggadah published in Vienna, c. 1900. (The first verse and the last verse are not pictured on this page).

Vienna was also a meeting place of Ashkenazic Jews and a much smaller but significant community of Sephardic Jews. Perhaps it was there where Sephardic Jews followed the cue of their Ashkenazic coreligionists and began to include Chad Gadya in Ladino translation in their Haggadah just as they observed the Ashkenazim doing with the Yiddish translation. Perhaps the inclusion came at the recommendation of Schlesinger himself, the Ashkenazi Jew who ran the printing press. More research would be required to investigate this hypothesis and to explore the reasons why the Ladino translation of Had Gadya may have become an increasingly standard feature of the Sephardic Haggadah. The Vienna encounter also reminds of us of the overlapping relationships and interactions between Sephardic and Ashkenazic Jews over the generations and their mutual influences on each other.

What is clear is that the Schlesinger Haggadah, reissued in Vienna several times, likely in 1897, 1900, 1903, and afterwards, became pervasive, like the Sephardic equivalent of the Maxwell House Haggadah among American Jews. Here in Seattle, we have found more copies of the Schlesinger Haggadah than any other Sephardic book. And according to WorldCat, the authoritative global library catalog, Schlesinger’s Ladino Haggadot can be found in no fewer than 269 libraries, thereby making it one of the more easily accessible Ladino books in the world. 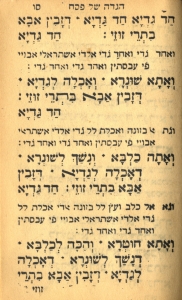 The Judeo-Arabic version of Had Gadya included in Shelomo Belforte’s Haggadah published in Livrono for the Jews in Baghdad, 1935.

Similarly, by the mid-twentieth century, Un Kavretiko/Un Kavrito had became nearly ubiquitous among Ladino-speaking Jews across the former Ottoman Empire and beyond as evidenced by field recordings collected by ethnomusicologists Isaac Levy, Léon Algazi, and Abraham Schwardon of informants from Salonica, Monastir, Istanbul, Rhodes, Sarajevo, Shumen (Bulgaria), Alexandria (Egypt), and Israel; in some places both Aramaic and Ladino versions were sung. Greek-speaking Romaniote Jews in Ioannina also created their own translation into Greek, and those in Tangier sang it in their own version of Judeo-Spanish, known as Haketía. Shelomo Belforte also included a Judeo-Arabic version in his 1935 Haggadah, which is part of the UW Sephardic Studies collection. Notably, however, Had Gadya apparently never became part of the custom of the Spanish and Portuguese Jews of Amsterdam and London. 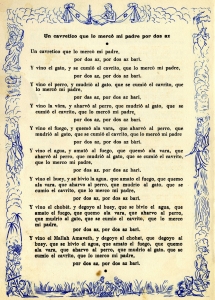 Here is a standard Ladino version of Had Gadya:

But in reality, each locale involved particularities in terms of vocabulary, verses, and tune. In the Ladino versions, “goat” was varyingly called un kavretiko or un kavrito; the currency with which it was purchased by the father varied among aspros, asprikos, as bari, lavanim, levanim, or levanikos, with some versions using a combination; the ox is referred to as buey or vaka; the stick as vara or palo; and God as El Santo Bendicho El or, like the Aramaic, El Akadosh Baruh U. In several places, the song was sung with the middle eastern-style Ottoman musical modes known as makams: in Salonica, makam saba; in Rhodes, makam oshok; in Bulgaria, makam bayat; in Ioannina, makam hijaz. In Corfu, it took on the upbeat style of an Italian tarantella.

The increasing popularity of the Ladino version of the song is also evidenced by its introduction into the canon of commercially recorded music. A Salonican Jew in Paris made the first recording in 1948. Later, the Israeli pop singer, Yehoram Gaon, recorded another version; and here in Seattle, in 1999, Hazzan Isaac Azose recorded his own rendition, available here:

So is Had Gadya part of the Sephardic tradition? Among Ashkenazim, the song and its Yiddish and other variations became part of the Haggadah and integrated into the seder at a particular time and place. The same is true for Un Kavretiko/Un Kavrito, which likewise became part of Sephardic tradition—albeit more recently. My friend and colleague, Ty Alhadeff, fondly recalls his grandfather, like other Sephardic Jews in Seattle, reciting the Haggadah—including Had Gadya—in Ladino, his first language, in order to fulfill the commandment to “tell your child on that day” (Ex. 13:18). This was not perceived as unusual, but rather as an enactment of Jewish tradition—regardless of whether the fourth cup of wine had been drunk or the children were still paying attention.

This year, consider singing Had Gadya in Ladino–or another language–at your Passover seder!

Hannah Pressman, “A Ladino Haggadah with Woodcuts and Wine Spills.”

Edwin Seroussi and Ofer Ronen, “Had Gadya in Israeli Culture.”