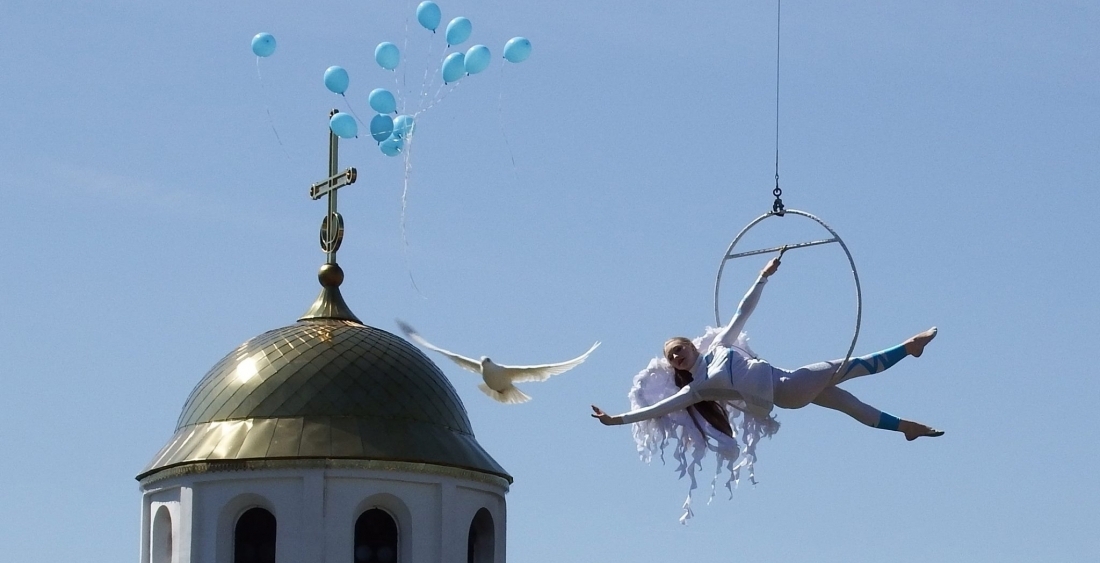 The city of Vitebsk celebrated the 100th wedding anniversary of the Chagalls with airborne acrobats, reenactments, and fireworks. All photos courtesy of Galya Diment.

My Journey to Belarus

I did not know what to expect when I went to Belarus to participate in the annual Chagall Readings and do my research for the book on the Vitebsk School of Jewish painters founded by Chagall’s teacher, Yehuda Pen (1854-1937). After all, it’s not for nothing that Belarus is often labeled as “the last dictatorship” in Europe… But I felt I had to go to Vitebsk because the place was also important to me for personal reasons: Near there, in Surazh, is where my father was born and where he, his parents and eight siblings lived until 1929, when the family moved to Leningrad. 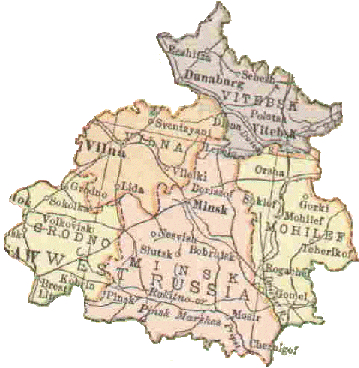 This map of Belarus was scanned from a 1916 atlas. Vitebsk is in the northeast section. The nearby town of Dunaburg was previously known as Dvinsk and is called Daugavpils today. Image via jewishgen.org.

Before they moved, my grandfather was a rabbi, first in Chashniki, also near Vitebsk, then in Surazh, and then, as synagogues were closing after the Revolution, in Chashniki again. My grandfather’s family was from Dvinsk (Dunaburg on the map at left), now called Daugavpils, which was then also a part of Vitebsk municipality but is now in Latvia. I flew to Riga, spent three days in Daugavpils, and then took a bus across the border to Vitebsk.

One active synagogue survives in Daugavpils, out of 42 that existed before the Soviets expropriated most of them and then the Nazis came through. And it has no rabbi, nor much of a congregation left (less than 100 people attend the services now) in the city that before the war used to be at least 50% Jewish. I was told that prior to 1941, about 40 people with my last name were part of the Jewish community there. By 1945 there were none left.

My husband and I stayed there at the Mark Rothko Center. Rothko (1903-1970) was born in Dvinsk but left for the States when he was ten years old. The Center, a slick and very modern complex built with European Union funds, is located in an early-1800s fortress which partly delayed Napoleon in his invasion of Russia, until he figured that he could go around it. (That fascinating old fort was, alas, used as an extermination center during WWII.) 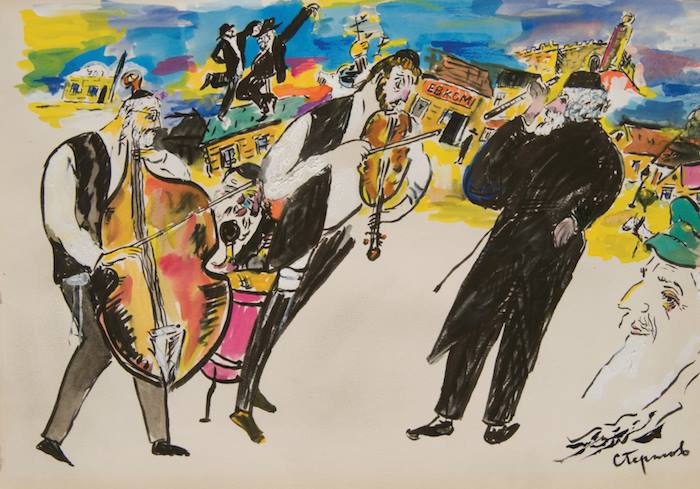 Solomon Gershov’s “Musicians,” undated. Like Chagall, Gershov was a student of Yehuda Pen.

Dvinsk was also the place where another remarkable Jewish painter, Solomon Gershov (1906-1989), was born. Like Chagall, Gershov was also a student of Yehuda Pen, who himself spent part of his early years in Dvinsk. Like my grandfather, Gershov moved to Leningrad in the 1920s. He was then arrested in the 1930s, and subsequently released only to be re-arrested again in the 1940s. He left the camps for good in 1956, following Stalin’s death and Khrushchev’s denunciation of the purges.

I had to part with my husband in Daugavpils since, as a foreign journalist, he was not welcome in Belarus. I also let my friends on Facebook know that they could not expect any posts from me while I was in Vitebsk since I assumed — as it turned out erroneously — that, like China, Belarus blocks one’s access to it. I boarded a very early bus and was waiting, with much trepidation, for the border control since I had read so many horror stories about crossing into Belarus. To my great surprise and relief, we were met by two women, in their early twenties, who reminded me of пионервожатые (young pioneer leaders) from my early student years when I was one as well. (People tell me I was just very lucky, but I experienced no problems and a very quick process on the way back, as well, when I was going to Riga by train.) 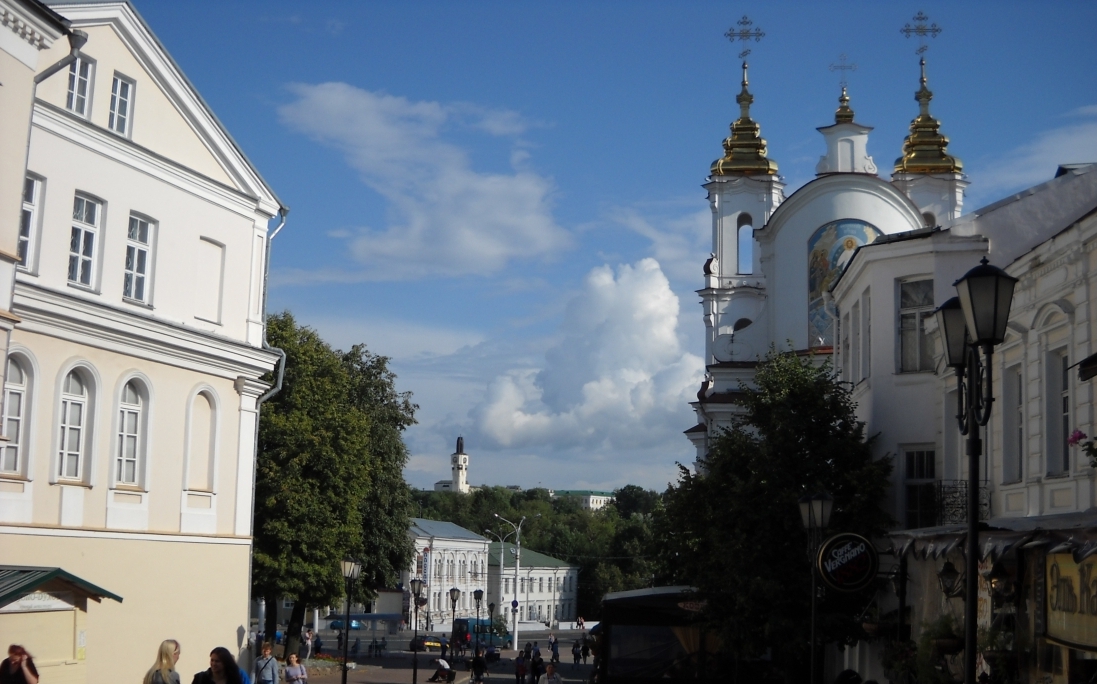 The restored city center of Vitebsk now looks more like it did during the Chagall era.

Vitebsk stunned me by its beauty. Since 2006 they have restored several churches from scratch and renovated other important landmarks, all through the initiative of a very ambitious governor who is now in Minsk, having left the city both these remarkable restorations and, apparently, very many debts. The result is that it now looks much more like it did back in Chagall’s times than it did during the Soviet era, and I could fully appreciate Chagall’s nostalgia for it. In a letter to Yehuda Pen from France in the late 1920s (which I found in the archives), he wrote: “You can have Paris, I will trade it for Vitebsk.” 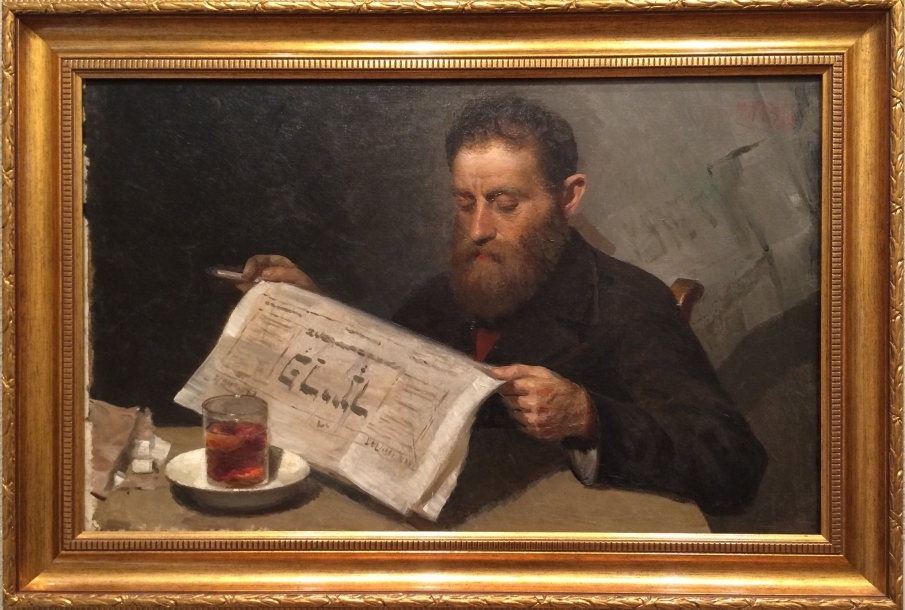 While there are hardly any Jews left in Vitebsk (the result, as in Daugavpils, both of the Holocaust and the Jewish emigration from the former Soviet Union), the city worships Chagall and Yehuda Pen. This July, while I was there, the city celebrated the hundredth anniversary of Chagall’s and Bella’s wedding with fireworks, a staged wedding of actors made to look like the painter and his young bride, and even acrobatics in the air.

This is deeply ironic because Belarus does remain, in many ways, a very Soviet place. In my hotel, which catered mostly to foreigners, next to my bed was a basket with suggested readings: books by Marx, Lenin, and the documents from the 26th Congress of the Soviet Communist Party. Not far from my room there was even a “Lenin’s Corner” with his bust and other likenesses. In the former Soviet Union, of course, Chagall’s art was deemed to be dangerously “decadent” and all too Jewish, so the coexistence of these elements is quite intriguing. 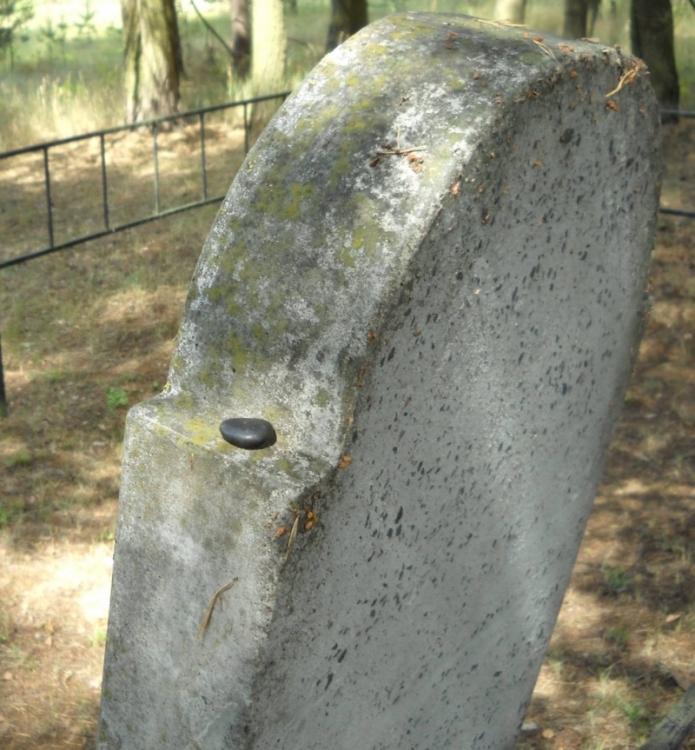 A stone commemorating the more then 600 Jews executed in Surazh during the war.

Two days after my arrival I took a bus to Surazh. There I was met by another participant in the Chagall Readings, Marina Karman, who was born in Surazh and still has a dacha (vacation home) there. Not much is left of the Surazh where my grandfather once served as a rabbi. The town, which used to have 6 wooden synagogues, was bombed and burned out of existence during the war, and now it is a very small village, with mostly one-story wooden houses, including Marina’s house, built by her grandparents in 1947. Surazh’s location, on three rivers, makes it hauntingly beautiful still. Marina took me to the old Jewish cemetery and a monument to 600+ Jews shot there during the war (many of them, no doubt, my grandfather’s former congregants).

Belarus Today and the Legacy of Chagall

Emotionally, Belarus proved in many ways to be much easier to deal with than Russia nowadays. It’s like the Soviet Union during the Brezhnev era. There are virtually no “believers,” so one does not have to spend endless hours arguing. It’s sad, and almost everyone is depressed, like we were in the former Soviet Union when it felt like there was no hope in sight — but easy. And, unlike the case with contemporary Russia, there is still much interest in — and idealization of — the West in general, and of the United States in particular. Fake cowboy outfits are in. Ironically, one can immediately recognize foreigners because they do not wear clothes with heavy English lettering and US flags.

There is, on the other hand, the KGB (which is still indeed called KGB) everywhere, and a huge new KGB building, with two underground floors, is being built to house even more of them. Right now they are actually located straight across from the Mark Chagall Center (not to be confused with the Marc Chagall House). And yet people seem to keep their mouths shut in Vitebsk only if they have good jobs. Most don’t think they do and appear freer to criticize things than most Soviet citizens were during Brezhnev times. Furthermore, despite obvious ideological limitations, I was allowed to work freely with the archival materials both at the Vitebsk Regional Art Museum and at the Vitebsk branch of the State Archive. I was even taken once to the local Party Archive in a different part of town for a particular document. 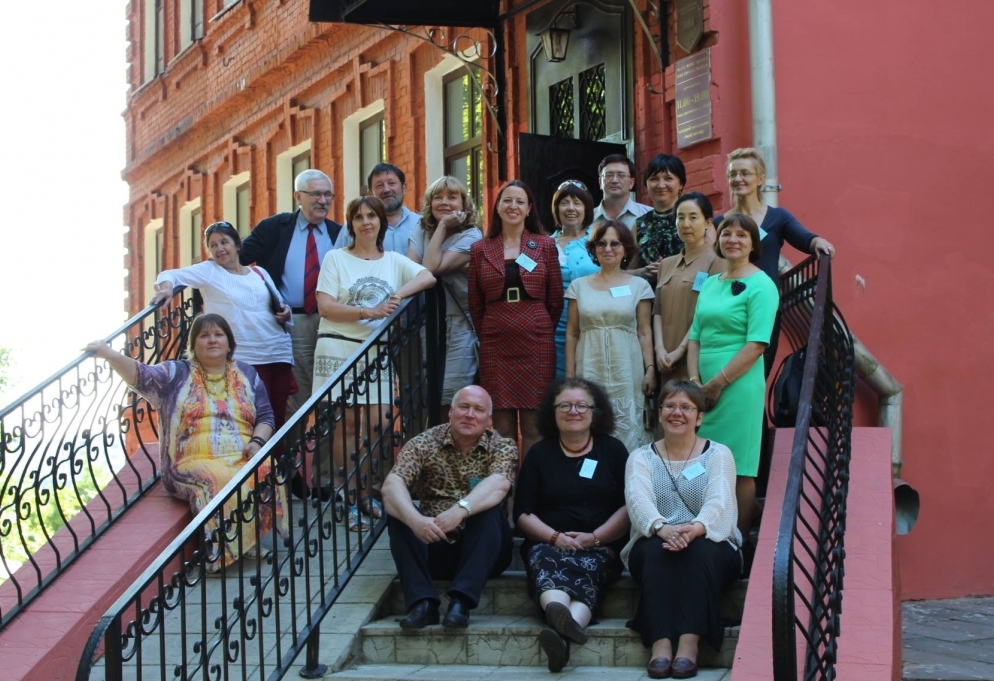 A group of scholars gathered at the Marc Chagall Center for a two-day conference in summer 2015. Galya Diment is seated in the front row, center.

The two-day Chagall Readings took place towards the end of my ten-day stay there. Sitting immediately on my left in the picture on the steps of the Chagall Center is Liudmila Khmelnitskaya, who was the director of the Center for 12 years, until earlier this year. She has edited many books on Chagall, and her numerous books about the history of Vitebsk are in all bookstores there. That the Museum has more than 40 Chagall originals (donated by his daughter) and is so revered and respected in Vitebsk is mostly her doing.

My talk at the Vitebsk conference was about yet another student of Yehuda Pen, his very first one in Vitebsk in fact: Leibe Shulman, aka Leon Gaspard (1882-1964), who, as a young man, made first Paris and then Taos, N.M. his new homes. You will have to wait until my book, though, to learn more about Shulman’s unusual and picturesque life. 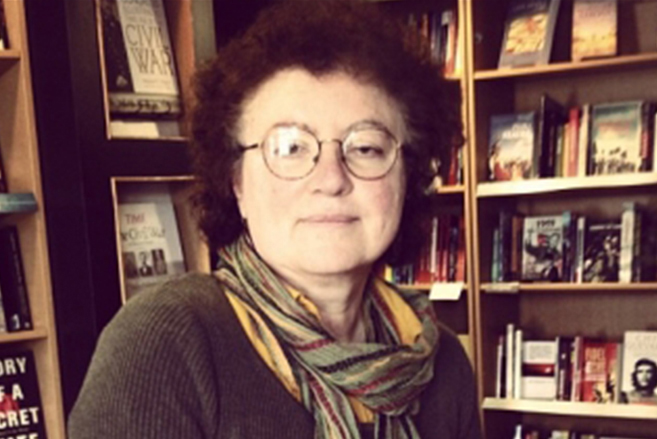 Galya Diment is a faculty member of Jewish Studies and Professor, the Thomas L. & Margo G. Wyckoff Endowed Faculty Fellow, and the Joff Hanauer Distinguished Professor in Western Civilization in the Department of Slavic Languages and Literatures at the University of Washington. Her teaching specialties include Russian literary and cultural history, the works of Vladimir Nabokov, and Russian Jewish film. For her 2015-16 Hanauer seminar she is teaching a course called “‘Melting Ports’ of the West: Film, Music, Literature and Culture of Odessa, Trieste, and Istanbul.” Prof. Diment received her Ph.D. in Comparative Literature from the University of California, Berkeley. She has authored and edited six books, among them A Russian Jew of Bloomsbury: The Life and Times of Samuel Koteliansky (2011). She is currently working on a book about Jewish painters from Vitebsk at the turn of the twentieth century, Vitebsk and Beyond: Yehuda Pen, Marc Chagall, and Leon Gaspard.